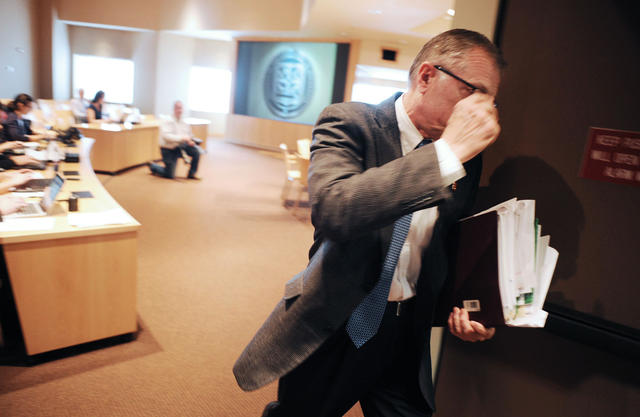 Regent Steve Sviggum walks out of a Board of Regents meeting after handing out a letter of resignation on Thursday at McNamara Alumni Center. (Photos by Mark Vancleave)

Steve Sviggum will soon resign from the University of Minnesota’s Board of Regents.

In an emotional speech in front of the entire board Thursday, Sviggum challenged the board’s reasoning and the fairness of the process that reviewed whether he could simultaneously hold his board position and a new job with the Minnesota Senate Republican Caucus.

“My reputation means a lot to me … I love this University unconditionally. This hurts bad,” Sviggum said.

He handed out a resignation letter and promptly left the board room.

Once official, Sviggum’s resignation will cut short a six-year term on the board that began in February 2011. Shortly after his appointment to the board in 2011, Sviggum stepped down from a fellowship at the Humphrey School of Public Affairs following an ultimatum from a regent committee that he pick one job or the other.

Soon to be one member short, Gov. Mark Dayton and the state Legislature will be responsible for filling Sviggum’s vacant seat on the board. Cohen guessed that seat may be filled by the next board meeting in early May.

Board Chairwoman Linda Cohen said she wasn’t surprised by his announcement, and will formally ask Sviggum to resign.

“I couldn’t see him giving up a job he’s really good at,” Cohen said of Sviggum’s position in the Legislature.

The remaining 11 board members unanimously accepted an ad hoc committee’s recommendation that Sviggum must choose between his dual roles. That recommendation was triggered by legal opinions from two attorneys – one from University general counsel Mark Rotenberg, and another from an independent attorney – which said Sviggum’s two jobs created an unmanageable conflict of interest.

Sviggum continued to dispute that conclusion. Since the board’s inquiry began in mid-January, he has consistently stressed that he is not a decision-maker at the Capitol. Sviggum announced he was taking that job Jan. 16. 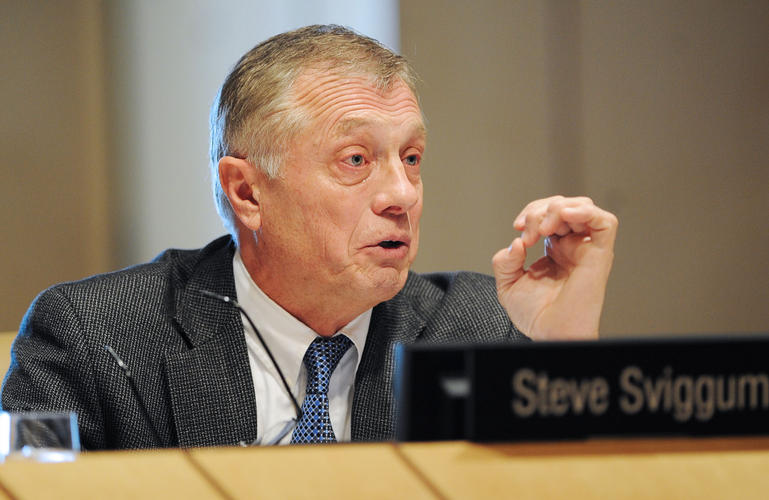 Regent Steve Sviggum delivers an emotional case maintaing his option that holding dual roles on the Board of Regents and Republican Caucus would not be an unmanageable conflict of interest Thursday at McNamara Alumni Center.

“Sometimes, members, the facts don’t matter anymore. Facts be damned,” he said. “You need to know I’m very comfortable with the facts.”

Rotenberg and the independent attorney, John Stout from the Minneapolis firm Fredrickson and Byron, both argued that Sviggum’s role as a caucus employee may pose a larger problem than if he were a lawmaker.

“Indeed, one might reasonably suppose that such an employee likely will be even more partisan and single-minded regarding public policy issues than an elected Senator, whose duty, after all, is to represent all the people of his district, not just those who associate with his party’s caucus,” Rotenberg wrote.

Regent Venora Hung said that the decision to force Sviggum to choose between his dual roles was not personal.

“We must mitigate the chance of a perception of a conflict of interest in the eyes of our constituents,” she said.

It’s unclear what steps will be taken to replace Sviggum. The governor can appoint a temporary replacement, as  former Gov. Arne Carlson did in 1996 when Regent Jean Keffeler resigned from the board. But even then, the Legislature was responsible for electing a candidate to finish Keffeler’s term.

Section six of the University of Minnesota’s charter addresses filling vacant seats on the board. It reads:

“Whenever there shall be a vacancy in the office of Regents of the University, from any cause whatever, it shall be the duty of the Governor to fill such office by appointment, and the person or persons so appointed, shall continue in office until the close of the session of the Legislature, then next thereafter, and until others are elected in their stead.”