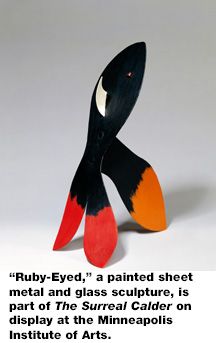 As babies we lay in cribs, squirming on our backs and staring up at floating mobiles adorned with smiling shapes and music pealing box bedtime songs. Were these mobiles to have dangled an awkward bird or mutated star, or played a song echoed through the caverns of a visionary mind, then perhaps we would have been living in the bespangled nursery of the surreal Calder.

Leading into the prescient collection of Alexander Calder, on exhibit at the Minneapolis Institute of Arts, is a selection of works by Max Ernst, Rene Magritte and others—friends and contemporaries of Calder who were part of the surrealist movement of the era. This visual prologue, which allows less work to remain hidden away in the storage archives of the MIA, demonstrates the unique nature of Calder’s choices of materials and concepts while simultaneously placing him within the parenthesis of surrealism.

The next several rooms of the exhibit are tastefully arranged with an abundance of drawings and sculptures, giving the maiden observer ample opportunities to become acquainted with the playful and meditative works of one of the surrealist movement’s quiet heroes.

Unlike many of his peers, a large portion of Calder’s works are mobiles. It’s not that other surrealists avoided the mobile, but more that it became Calder’s signature medium. In his mobiles Calder combined wire, metal, wood and string with three-dimensional sculptures to create delicate yet substantive impressions. By allowing gravity, wind and other elements to continually affect his compositions, Calder invited the “real” world to directly influence his work and give it a life beyond its material composition.

Automatic drawing, a method of drawing in which the pen never leaves the paper, was reasoned by the surrealists to allow for a certain freedom in creating; creating, that is, a sort of subconscious drawing in which old habits might give way to new ideas. Calder applied this technique in pieces like Two Acrobats and Hercules and the Lion, in which the features of his figures and the conversations between line and form bring the pieces to life.

Running continuously is a 19-minute film titled Calder’s Circus that shows the artist re-creating a fantastical arrangement of puppets. In it, Calder’s present hands and youthful eyes animate the small molded figurines, giving life to them as they twirl and fly across the screen. The fascinating thing about this short film is that it presents Calder as an artist removed from making statements through his work; he is instead entirely caught up with the freedom and magic of the imagination, leaving the role of “contemporary surrealist of the day” to other trail-blazing innovators.

Calder’s use of color changes with his choice of materials and during his personal evolution as an artist. In Four Leaves and Three Petals, a piece completed in his later years, the majority of the form comes off as the thin windy shadow of a “real” work positioned someplace out of sight. Color is only incorporated as the sharpest contrast and is a subtle reminder that Calder was a master who enjoyed his work and the vast imagination.

The Surreal Calder runs through Sept. 10 at the Minneapolis Institute of Arts, 2400 3rd Ave. S., Mpls., 612-870-3200. Tickets are required and available for purchase at the museum box office, by phone or on line at artsmia.org.