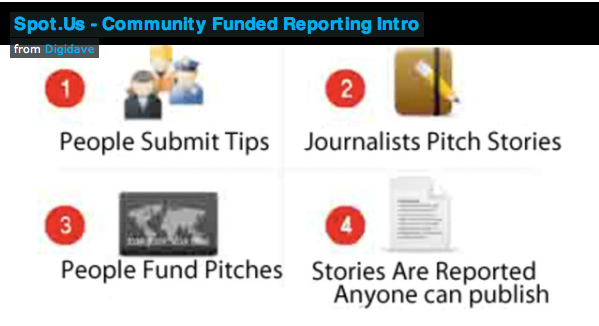 Spot.Us is a new way to support journalism, the brainchild of David Cohn in California. The site posts pitches from journalists and news organizations, with each pitch telling what the story will be about, who will report it, and how much they need to raise to pay for it. Then people contribute, the reporter writes, and the story gets published. “The public now has a free-lance budget,” the website says. It’s a simple idea for public journalism, but the practice is a little more complicated.

Full disclosure: TC Daily Planet is working with Spot.Us to raise money for our reporting. Our first Spot.Us pitch was Sheila Regan’s coverage of the dual – and dueling – narratives of the Dakota-U.S. War of 1862. This coverage, which we pegged at $500, has been fully funded and is in the final editing process – look for the stories beginning September 13! Our current big push is for a series covering the Riverside Plaza and Seward Towers highrises, their history, their immigrant communities, and the controversies over the buildings, their residents, and crime in the neighborhoods.  With five writers and at least 10 stories planned, we need to raise $2000 to support this project.

Spot.Us started in California, but got to the Twin Cities in June. The Uptake and MinnPost made the first local proposal to Spot.Us, proposing to raise $40,000 to fund their coverage of the gubernatorial election. That’s a lot larger than the typical Spot.Us story, which is about $1000.

Stories funded by Spot.Us have been published in a wide variety of venues, from Oakland Local to California National Public Radio affiliates and the New York Times. Most, however, are published by small or medium-size organizations.

Most Spot.Us funding comes from small contributions, and that’s partly because sponsorships allow people to contribute five dollars of someone else’s money. Sponsors – including Clay Shirkey and Free Press – agree to give five dollars to the story of your choice, if you register with Spot.Us and take a survey.

Spot.Us founder David Cohn says that they are passionate about making sure that “important but untold stories are finally told.” Citizens can create news tips, asking for reporting about issues in their communities. Journalists can post pitches, asking for donations to fund reporting. News organizations can also post pitches.

As for the future, Cohn expects Spot.Us to expand. “We started in San Francisco, and then expanded to L.A.,” he explained. “We’ve also done pitches in Seattle, though none at the moment. We had a pitch in Champaign Urbana. We are going to publish a story this week that takes place in Wisconsin.

“We’re starting to try to expand and have pitches for all over the country. …  [Our goal is] to open up and make the site available to anyone from all over the country.” So far, Spot.Us has published more than 70 “projects,” many of which consist of more than one story. The biggest, said Cohn, was the five-week coverage of the trial of a police officer for killing Oscar Grant in Los Angeles.

About 20-30 projects are currently in the process of being funded. “Typically,” said Cohn, “they are  not the big, investigative pieces, but are stories that are important to a community.”