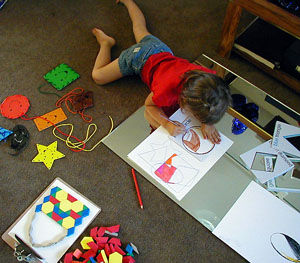 Do your children go to grandma’s house while you are at work? You’re in good company — some 70 percent of households use Family, Friend and Neighbor (FFN) care, according to the 2009 Child Care Study, conducted by the Wilder Center and researcher Richard Chase, with about 52 percent of FFN providers being grandparents. Chase believes that both research and state policy need to include FFN providers, and support them in improving developmental and educational opportunities for children.

FFN actually is better seen as two categories. The “family” caregiving looks quite different than the “friend and neighbor,” part, he said. Grandparents, who make up 60 percent of FFN care, generally provide care for free, or part time. Friend and neighbors are generally paid more, and might be more interested in professional support, Chase said.

Part 2 of 2 articles on Family, Friends and Neighbors child care. Click to read Part 1: Grandmas, friends, and the lady down the street: Important providers for early childhood care and education

The advantages of FFN care are that providers are generally attuned to the values of the parents, and are able to build the child’s sense of character and identity. FFN providers also have a stronger relationship with who they are providing care for, and can make adjustments in care based on conversations with the family.

At the same time, Chase said that more research is needed to see where FFN is living up to the promise, and where it is falling short.

Richard Chase began researching childcare in Minnesota in 1999. In 2004, Chase was part of a team that created a household survey with families to develop a sample of FFFN caregivers. Prior to the survey, most of the research had been talking to families — why they use FFN, how much, and under what circumstances. The 2004 survey was of the caregivers themselves — why they did it, and what they needed for support. The researchers spoke to 400 caregivers statewide.

Meanwhile, a similar survey was conducted in response to concerns that FFN care was being paid for by child care assistance. Much of the interest in FFN, in fact, came out of concern based on an assumption that payments to FFN providers amounted to subsidies for substandard care, Chase said.

Through Chases’s research, however, he found that among FFN caregivers there was a continuum of quality. Some are licensed providers, others didn’t necessarily want to become licensed. They were “more interested in child development than professional development,” he said.

Low income families, if they have the resources, will generally send their children to a child care center, according to Chase. If they don’t have resources, they will use FFN. “The most vulnerable populations use FFN, so the question becomes, what can we do to improve their care to improve healthy child development?” Chase said.

Currently, the state is developing a new integrated data system for early childhood education (see here for the RFP, which was due last month), but in order to get a complete picture, we have to integrate FFN caregivers, according to Chase.  “Otherwise we are missing the most vulnerable kids,” he said.

The national model for developing data systems has mostly ignored FFN care and foster care. “If you turn a blind eye to the most vulnerable care, you’re getting inaccurate and incomplete information,” he said.

Chase’s work has converged with that of Betty Emarita, and her idea of family and community knowledge systems. The two researchers have come together collecting new information for an early childhood data system, and they have been trying to expand through new tools of engagement, with a broader understanding of what is meant by childhood development.

Under the current policy, an FFN provider can register for child care assistance, but at a lower rate. The number of such subsidies has shrunk, he said, as has the amount that each caregiver receives. According to Childcare Aware of Minnesota, nonlicensed caregivers also must complete CPR and First Aid training in order to receive Child Care Assistance (CCAP).

“I’m hoping if we expand our definition of what quality means, and think about FFN within that,  we would think about other dimensions of quality that might not be provided by other places,” he said.

That means more than just making FFN caregivers licensed. Supporting these caregivers could include depression screening, home visiting, and other mental and health support to ensure healthy care development.

Chase said that support for FFN care comes down to opportunity and access. The achievement gap stems from a developmental gap, which has to do with access to resources. Currently, most public policy has focused on ages 3-5, but there is a policy gap for ages two and younger. There’s still a larger belief that care for very young children is the family’s responsibility.

Chase said that policy makers need to make sure those kids have access to care that provides for overall health development, from brain growth to a positive cultural identiy. He wants to make sure we have comprehensive support for FFN caregivers. “To me the whole question is about broadening our understanding of care so we can close the policy gap.”