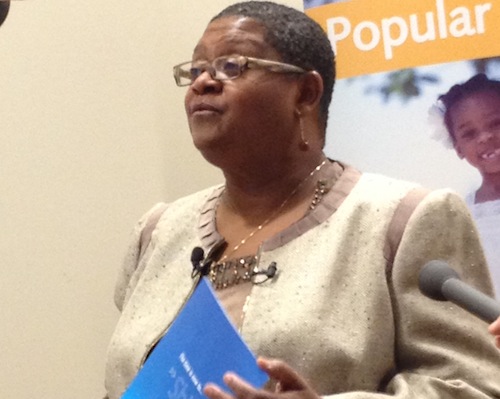 A standing-room-only crowd listened as Minneapolis Public Schools Superintendent Bernadeia Johnson announced her plans for changes in the district, including a new “innovative partnership zone” which would include 20-30 percent of schools. She said school teams in these zones would “exchange autonomy for accountability,” and would be governed by performance based contracts and  freed up from what she characterized as outdated rules. The announcement came at 8:00 on Monday morning (May 13) at Pohlad Hall, the meeting room on the second floor the downtown library.

The plans announced by Johnson will require substantial contract changes, and the announcement came as the current two-year teacher contract is about to expire on June 30. Last time around, for the 2011-2013 contract, negotiations for a new contract began in September 2011 and the contract was approved in April 2012.

Minneapolis teachers’ union president Lynn Nordgren responded just before press time, saying that the Minnesota Federation of Teachers is “encouraged that the Superintendent has brought forward several ideas that the teachers union has championed for many years,” including hiring teachers earlier in the year, hiring more teachers of color, creating a collaborative partnership, maintaining a quality, experienced teaching workforce, and developing a “homegrown teachers program.”

Johnson said the district is embracing the methods of high performing charter school programs such as Hiawatha Leadership Academies and Mastery School. “They are modeling the performance that will soon be our norm,” she said.

Johnson received a standing ovation at the meeting, which was attended by Mayor R.T. Rybak, school board members, and a number of City Council members and mayoral candidates. Her speech called for an end to “blaming others” for poor performance, and said MPS had to stop being satisfied with the status quo.

Johnson’s new partnership zones (or autonomous zone) would begin with a planning stage during the 2013-2014 school year, to be implemented during the 2014-2015 school year, she said. The zones would start with the district’s high priority schools: Anishinabe, Bancroft, Cityview, Folwell, Green Central, Elizabeth Hall, North High School, Olson, Pratt and Sheridan.

These schools would develop a new relationship with the central office, Johnson said.  “In these schools, we want to work together to set aside old ways of thinking, progam and practices that no longer add value and outdated contract provisions in areas such as staffing and instructional time.” These schools would be “freed from many central office or contract rules so they can build school teams, innovate and deliver what students need at that site.”

The autonomous zone model has proven successful, Johnson said, in cities like Boston (where it was originally called “In-District Charter Schools”) and Denver. The model is in some ways similar to charter schools, she said in a follow up question and answer session with media. The model would give the school autonomy to hire people from outside of the district, and would give them more flexibility to fire them go if they aren’t working out.

This flexibility would be given to the schools, she said, in exchange for accountability, based on performance.

At the same time, Johnson said that currently the district “is testing too much.” The accountability that Johnson foresees will be based on college and career and core life skills, instructional processes, student engagement and ownership of learning, family and community engagement and financial and legal performance.

After Johnson’s speech, Julie Guidry, a parent and Executive Director of Upstream Arts, a nonprofit arts organization that works in the schools with kids with disabilities, says she was hopeful after the speech, and liked that Johnson focused on keeping it positive.

Art Seratoff, a community activist and educator, was disappointed that Johnson didn’t speak more about community and parent input.