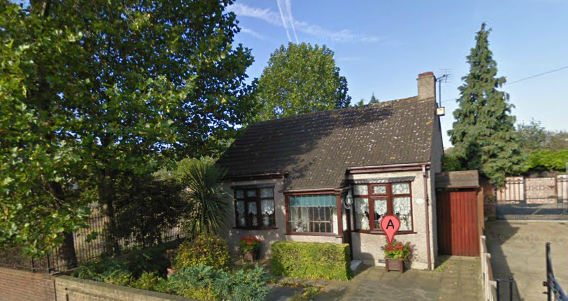 If you look up 17 Cherry Tree Lane on Google Maps, you encounter a small, nondescript house in the Borough of Havering in London. But according to author P. L. Travers, this address was the sight of one of the greatest phenomena for children worldwide: Mary Poppins. The Banks family is a scene of unparalleled conflict of order and chaos as the Banks’ try to find a suitable nanny for their rambunctious children. Out of the blue, Mary Poppins, the savior nanny, appears to take care of the children, and the adventures that follow are odd and exciting, a feeling that this performance excellently captures with set and acting. Come along to 17 Cherry Lane (or the Orpheum Theater) for a pleasant drift through the classic story of Mary Poppins. Didn’t guess that from the picture? Perhaps Google Maps isn’t so accurate after all.

The set was a delightful game of contrasts. The Banks’ home, the park, and the bank were drawn, as if in a sketchbook that came to life. This ‘sketchbook quality’ emphasized the characters over the set and kept with the Victorian theme. In other words, it was the adult’s world. But when the children set out on adventures with Mary Poppins, the set exploded with color and imagination. Huge flowers, bright lights, and bold costumes were coordinated to make each number shine more than the last. Suddenly, the set became the magical world of Mary Poppins and the children.

Overall, the singing stopped short of the energy needed to overwhelm the audience, or needed to “whelm” the audience in any way. Despite some lackluster ensemble numbers, however, the cast was accentuated with particularly exceptional performances from Mr. and Mrs. Banks, the children, Bert and Mary Poppins. Mr. Banks (Chris Hoch) was the embodiment of a conflicted parent who turns to order to escape his childhood. Mrs. Banks (Kerry Conte) was a master of emotional message and a voice worth its weight in gold; she expressed the rising tide of independent woman of the time period in a clear, powerfully moving voice. The children Jane and Michael (Alexa Shae Niziak and Eli Tokash) harmonized almost perfectly throughout, while Bert (Con O’Shea Creal) could have been a  carbon copy of Van Dyck himself. Mary Poppins (Madeline Trumble), last but not least, was true to her character. Even her constant vibrato, which convinced more than one audience member that the performance was Mary Poppins: The Opera, was part of Mary Poppins’ excessive perfection.

Revisiting the classic Mary Poppins has both nostalgia and double-takes. The story brings wonderful characters, British-ness, and childhood adventures. But in addition, Mary Poppins seems a little more odd, gruff with the children, and self-centered than the childhood memories of her. But, in the end her good qualities shine through. In fact, they shine through the ages, because this musical is not leaving us for a long while. So, cheerio, until we meet at 17 Cherry Lane for an incredibly long word, a spoonful of sugar, and a little imagination.