“It was a Spanish topical format,” explains Magic General Manager Rodney Smith on the station before it switched formats in June 2011. “They [the station owners] brought me in and switched it to an Adult AC [Adult Contemporary] format. It’s been going good for us.”

The station moved its studios from Chaska to Golden Valley last September, which Smith believes has helped as well. “Our listenership is up,” he says. 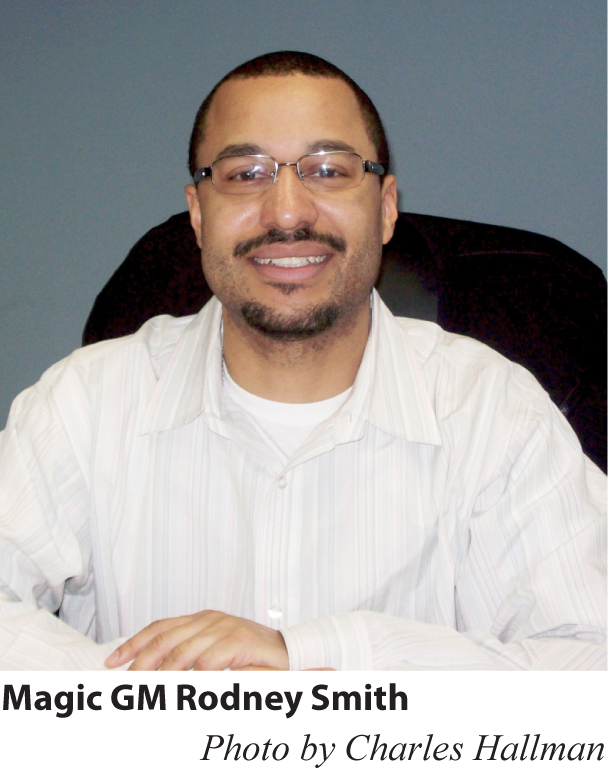 With the FM band the typical radio location for music, Smith says, “We are giving something nobody is giving right now currently to the Twin Cities: Tom Joyner in the mornings, and Debonaire on middays, and Michael Baisden [afternoons].”

Joyner and Baisden both are nationally syndicated programs. “Because of those two shows coming to this market, it has increased our ratings and listenership,” the GM believes.

Magic 1530’s classic and current soul music format isn’t just for Black listeners: “We have a lot of mixed listeners,” he points out. “Motown hits a lot of people — Black, White, Asian and Latino. We have some of the listeners from the [former Latino-oriented format] who enjoy this type of music, and some of them grew up on it or exposed to it.

“I know that there have been a lot of format changes in the Twin Cities,” he continues, “which I think is helping push us even faster now.” Smith points to WLTE-FM that recently switched from light rock to country music just before the New Year and predicts, “I think there will be some [more format] flipping coming soon.

“There are people who are looking for places to spend money, and they want something different. Right now, what we’re doing is a great thing for the Twin Cities. The music that we are playing gives energy [and] a vibe.”

Smith calls himself a “radio lifer” — “I’ve been in radio for almost 12 years now.  It’s something that has been instilled in me, and almost second-nature.”

His first hire at Magic 1530 was Debonaire. “I was the first phone call he made,” recalls the midday host (10 am to 2 pm weekdays). He proudly says his show typically runs the musical gamut from “from Marvin Gaye…to everyone else in between.”

Both the host and the GM admit they are competing with FM, satellite radio and personal technological devices for listeners, but they believe they are up to the task.

“There’s some challenges,” notes Smith. “In this day and age, people aren’t used to AM — they’re used to FM. Some cars don’t have AM antennas in them. It is a challenge, but with the technology, Internet, apps and social media, that does help get the word out and give people the opportunity to check out Magic 1530.”

Also, Magic 1530 is a “daytime-only” station — it is authorized only to broadcast during daylight hours. “From sunup to sundown is when we are at full power,” Smith explains. “Since we are getting closer to the spring and summer months, we’ll be on longer.

“However, we do broadcast 24 hours a day via the Internet, and we are looking at doing some other things to broadcast, including getting apps so that people can listen to us through smartphones 24 hours a day as well.”

“With us being a dot-com [www.Magic1530.com], streaming live is huge,” adds Debonaire. “Being able to stream live, people can tune us in.”

“If we keep up with the technology curve, we’ll be OK,” surmises Smith. “You want to make sure that you expose your product to as many people and give them the choice to choose or not to choose. But I think once they take a listen, they’ll be hooked.”

Finally, with local personalities Mani (midday co-host) and weekend hosts Sam “Soulprano” Pacini (Saturdays) and Charles Doughty (Sundays), along with nationally known Joyner and Baisden on board, “I am trying to make this the best station that I can with the staff that we have,” says Smith.

“The personalities, and of course the music is what drives the radio station. We have a great staff and great music here, and you can feel the vibe and energy level here. I think as long as you focus on your product, you come out ahead.”