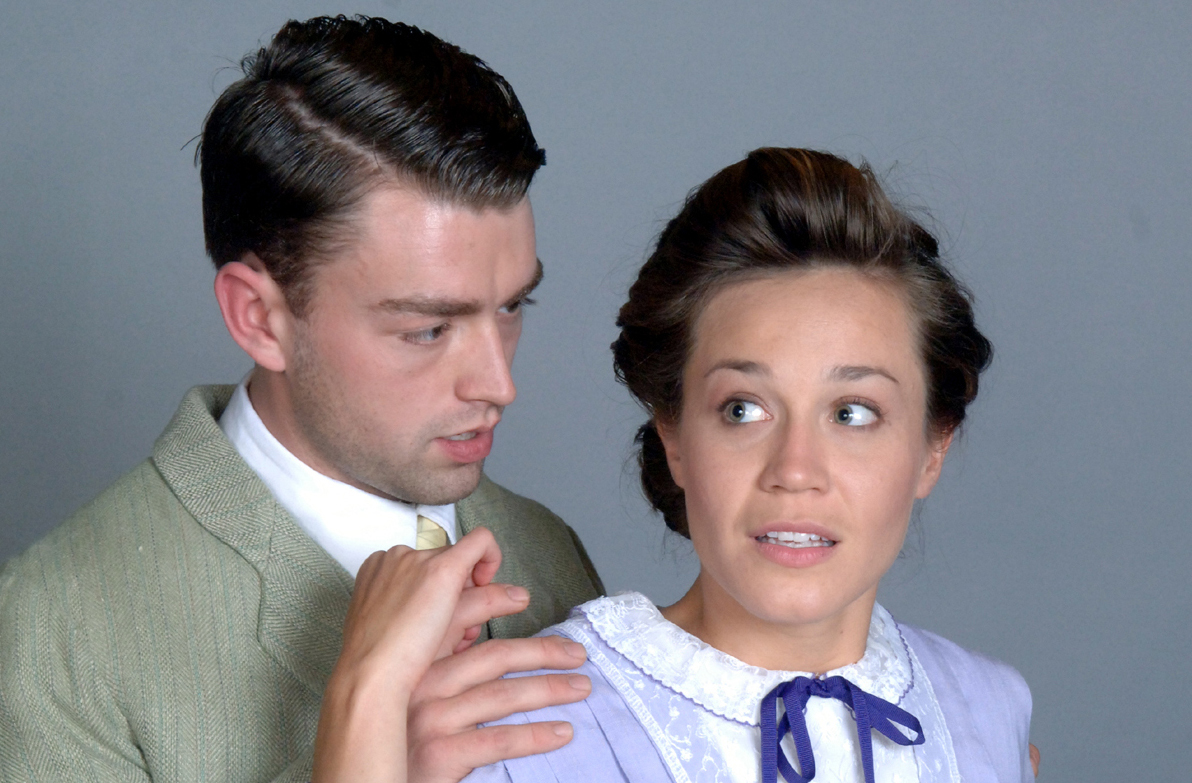 Casey Hoekstra and Joanna Harmon in Summer and Smoke. Photo © 2012 Act One, Too, Ltd., courtesy Theatre in the Round.

Tennessee Williams said that Miss Alma, the central character of Summer and Smoke, “may very well be the best female portrait I have drawn in a play.” It will be a long, long time before local audiences see the role played more compellingly than it’s being played by Joanna Harmon right now at Theatre in the Round. There’s not a weak link in director Randy Reyes’s sizzling production, which is not only the strongest production by the 61-year-old company that I’ve ever seen, it’s the best show I’ve seen so far this year on any local stage.

The play was written in the mid-1940s, making it a contemporary of The Glass Menagerie and A Streetcar Named Desire, but its world feels even more claustrophobic than the Wingfields’ living room or the Kowalskis’ kitchen. (By way of disclosure, I should mention that my mother Jean is a volunteer box office manager at Theatre in the Round.) Summer and Smoke is set in the early 20th century in the small town of Glorious Hill, Mississippi, where Alma is trapped by the need to care for her aging parents (Karen Bix and Richard Daly). She has an enthusiastic suitor in the nice but asexual (homosexual, some believe) Roger (Ty Hudson), but her passions are fired by the dangerously seductive John (Casey Hoekstra)—a hedonist who makes little secret of his affairs with women from outside polite society, notably casino queen Rosa (Tara Lucchino).

Only a master such as Williams could pull off the challenge he sets himself in this script, which requires two characters who are obviously in love to spend the play’s long duration fighting their desires—while, at the same time, trading places in the play’s moral universe. Williams manages it with such aplomb that even the minor characters have depth; Rosa and Roger could each have had their own plays.

That depth and texture is expertly enacted by Reyes’s superb cast. As local townsfolk, Jim Bitney, Sue Gerver, and Christine Sweet make a meeting of Alma’s culture club both funny and poignant; Eric Ringham earns plenty of his own laughs as John’s dry father. Lucchino and, as her father, Al Saks nail their short but crucial scene as a rags-to-riches Mexican-American family. Nykeigh Larson and Taylor Evans are well-judged in small but crucial roles. The show, though, belongs to Harmon and Hoekstra.

Hoekstra is a revelation, seamlessly embodying a complex character whose licentious actions bely his deep principles. He’s a worthy foil for Harmon, who for years has been one of our most powerful local actresses but has never before had such a substantial role to showcase her talents. Under Reyes’s direction she takes great risks with Alma, and they pay off spectacularly. The character’s eccentricities might be distracting or diminishing in other hands, but Harmon marshals Alma’s trademark laugh and other foibles with perfect control, building to scenes of enormous impact. If other local directors are watching, this performance should open much bigger doors for Harmon.

It’s a rare opportunity to see this American classic staged with such passion and power in such an intimate space as Theatre in the Round. Don’t miss it.

Read Jay Gabler’s review of The Hollow at Theatre in the Round (May 2012) and an interview with Joanna Harmon (October 2011).