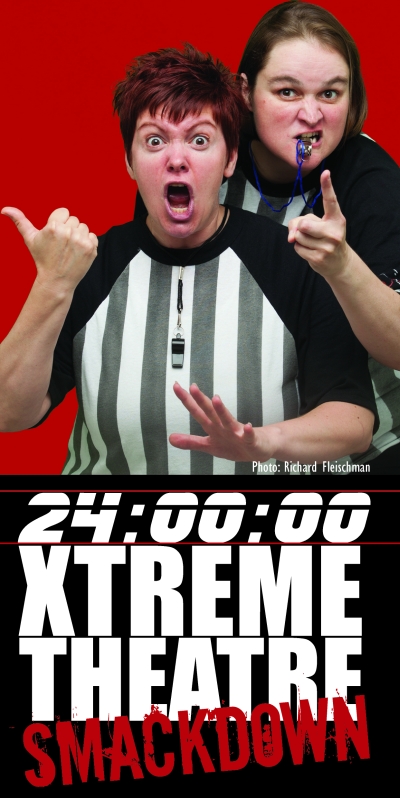 Theatre Unbound is gearing up for another Smackdown – a 24 hour overnight writing next day rehearsing and performing extravaganza of weirdness.

And of course we’d like you all to help create the weirdness, so…

and make suggestions by next Monday 11/26 (you have the week) of potential secret ingredients to be included on Unbound’s ballot to be posted at the end of next week.

Scroll down to the posting on the Smackdown and have at it!

They’ll chose the most interesting ideas for people to vote on in each category.

These four ingredients will be presented to the writers at 9pm on Friday January 11, 2013.  Teams of two will then have until 5 the next morning to create a ten minute play including those ingredients.

a line of dialogue

Current suggestions include, among other things:

a candlestick, Lime Jello-filled bathtub, a binder full of women

“I don’t believe this ground is entirely stable.”
“I’m Michelle Bachman and I approve this message.”
“I’ve run out of words, I’m going to have to use numbers.  Seven!”

Hiccups, A third world child with a credit card, an extended pratfall, exit pursued by a bear, everybody polka!

Scroll down to the posting on the Smackdown, and suggest away!

After next Monday 11/26, they’ll gather the suggestions together, pull the best options for the ballot, and then open voting to the public on December 3rd for the final determinations.

Then the writers will have the winners in each category sprung on them the night of January 11 to be included in their play.

Thanks in advance for your creativity!