The BCTGM unit there — currently just 19 workers — totals about 25 at peak times, said Jerry Lahr, 56, the local president, who lives in Waconia.

“It’s like a small little family,” Lahr said. “They’re hunting and fishing together… Most of us are long term employees,” he said, with 15-38 years on the job (for Lahr, 36-1/2 years). They know the names of each other’s kids. “We’ve been here a long time.”

Their unit is part of the broader BCTGM contract with American Crystal Sugar and the Chaska facility is directly tied to company-wide operations.

“All the sugar gets brought in here by truck,” Lahr explained, coming from the Red River Valley. The four silos each can store 85,000 hundred weight of sugar. The facility also includes two big warehouses and other rented warehouses are nearby. From here, trucks then take the sugar to manufacturing companies using sugar for baked goods, soft drinks, pharmaceuticals, and other uses.

“The trucks have been coming in,” Lahr (pictured, below) said. “All these guys are non-union truck drivers… But they called a service guy [to fix trouble with an elevator] and he said, ‘I don’t cross picket lines.'” This individual called his dispatcher, Lahr related, “tooted his horn, waved goodbye and never crossed the line.” 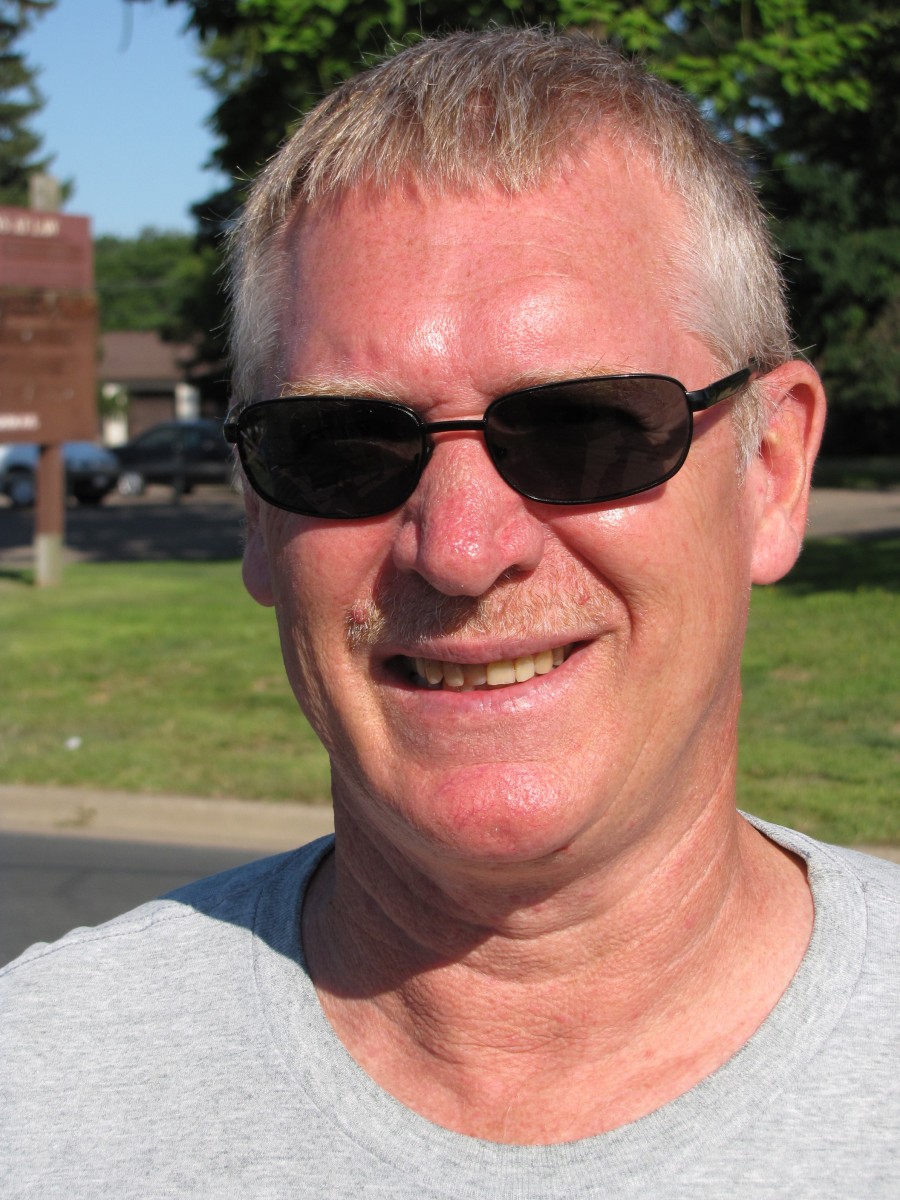 Three uniformed security personnel sit under a tent a stone’s throw away from the locked-out workers. They’re from Michigan, Lahr learned. When he tried to drive into the facility entrance the first day of the lock-out, they told him, “we’ve been told not to let you guys in.”

Most of the group of 19 workers are here early on a sunny weekday morning because a representative of the U.S. Department of Labor is coming to meet with them. Because the workers are locked-out and willing to work — not on strike — they’re supposed to be eligible for unemployment compensation. But their applications were still pending. (“We got unemployment straightened out,” Lahr reported August 19, with checks soon).

For Lahr, the distinction between a strike and a lock-out is important. “A lock-out is where the workers want to work but management won’t let them work.”

“We offered to work under the terms of the old contract until a settlement could be reached, but management wasn’t interested in that,” Lahr said. “They want to take the voice away from the union.”

“I told all the members right from the start [of negotiations] they simply would not bargain,” Lahr said. He advised members “to be prepared for a lock-out because that’s where we were headed.”

The company’s proposal severly slashed health care and other benefits.

“It was such a reduction in benefits we couldn’t go along with it,” said Tom Biernat, 62, Crystal, who has worked seven years at the facility. “With a company that’s doing so well, it doesn’t seem fair,”

He’s a “bin man,” Biernat explains. “I move the sugar around from the trucks to the bins and the bins to the trucks. Anywhere the sugar moves I’m in charge of that.” But not today.

“As soon as we started training some of the corporate people you could tell what was coming,” said Bob Baden, 56, from Marystown, the senior employee on the job site, with 38 years at the company. He’s now the warehouse foreman. Early in his career there, he lived through two strikes. And now this lock-out. “It’s a shame it came to this,” Baden said. “We’d still be working and talking.”

He shrugs. “That’s big business… It makes you feel like a number — but it’s kind of always been that way.”

Besides old hands like Baden, the unit also includes a few younger workers for whom the lock-out is slowing down their count to the 195 days they need to work to gain full-time union status. “It sucks,” said Joe Melichar, 23, a one-year employee who lives in Mayer. “We see people driving by and going in to our job and working.”

“For us, we’re trying to decide if this is going to be our career path,” said Jake Strunk, 25, Shakopee, a one-year employee. “This isn’t a good sign.”

“We do have a lot of people who drive by with support,” said Dave Pearson, 25, who lives in Carver and has worked one year at the company. People honk their horns, stop by with water and food. “The community is really supportive.”

Friends and family members have been joining the locked-out workers on the picket line, too. “My dad’s a hard worker and he’s willing to work,” said Martha Lego, 31, joining dad Tom Biernat this morning. “It’s frustrating when he’s able to work and wants to work and is not allowed to work.” 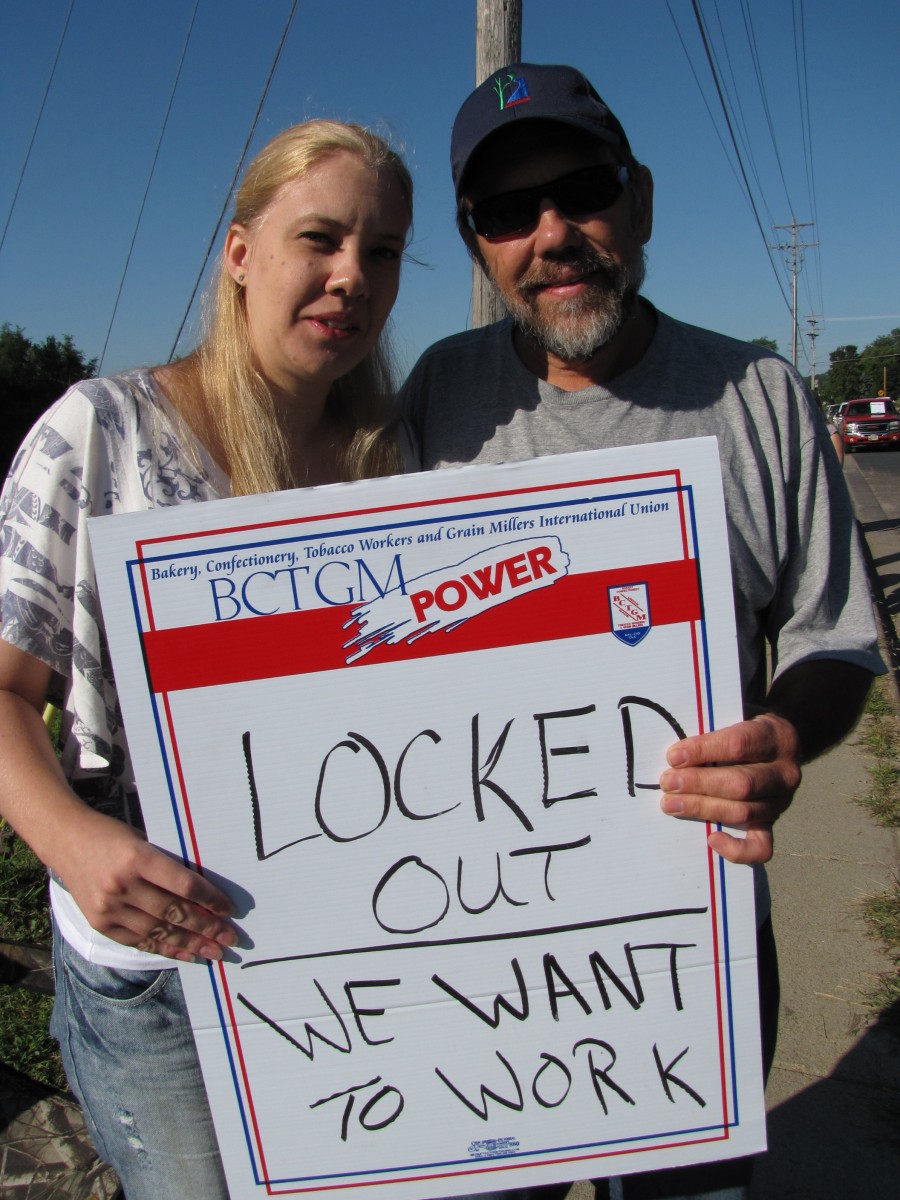