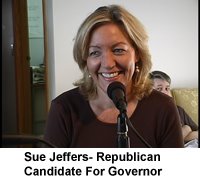 Sue Jeffers used to be a big Tim Pawlenty supporter. She helped him in his campaign to be elected Governor. But since he’s been elected, Jeffers says Pawlenty has disappointed her again and again. So much so that she’s running against him in the September 12 Republican Primary. The winner will face the winner of the DFL Primary between Mike Hatch and Becky Lourey.

Listen in as Jeffers explains why she was not allowed to speak at the Republican State Convention even though she was the only declared candidate for Governor up until a few days before the convention. Jeffers finds fault with Pawlenty’s budget balancing using shifts and ultimately raising the tax burden on property owners while claiming he hasn’t raised taxes at all.

She’s upset that on Pawlenty’s watch Minnesota has spent millions of dollars on light rail, but roads have been allowed to fall apart.