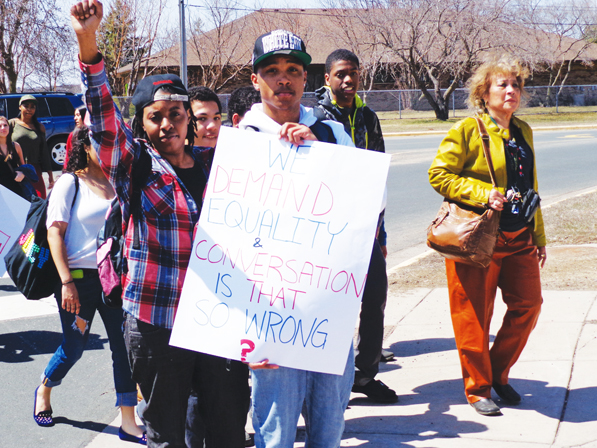 In last week’s edition, the MSR reviewed 2009 suspension data from several suburban schools showing, as the story headline stated, that “Black suspensions [are] more than double other students’ in suburban schools.” The MSR also reviewed the 2010-11 and 2011-12 discipline data from the Minnesota Department of Education (MDE) to determine if schools have improved since 2009.

According to the most recently available MDE data, the extremely disproportionate Black student suspension rates in several Minneapolis suburban schools have not significantly improved over the course of the last two school years, and in several cases have grown considerably worse, despite statements from many districts that they have programs in place to reduce the rates. The MSR examined MDE disciplinary action counts from 13 school districts. Following are specifics from four districts.

Fifty-seven percent of 2010-12 suspensions (580 of 1,010) in Hopkins junior high and high schools were Black students, an 11 percent increase from 2009. Black students also accounted for 344 of 562 “disruptive/disorderly conduct/insubordination” suspensions (61 percent) in 2009-12, the highest rate among all suspension categories, although Black students comprised only 21.5 percent of the total student body.

This “disruptive conduct” category is “very vague” and typically “has the largest number of African American students” who are suspended, says St. Thomas Law Professor Nekima Levy-Pounds, whose assistance was requested by several parents of Hopkins Black students in response to disciplinary actions that led to an April 26 student walkout. She points out that “a lack of diversity and cultural competency, and a lack of understanding of young people who are coming there from different racial, ethnic and socioeconomic backgrounds” among teaching staff and administrators is partly to blame.

Several Hopkins Black students recently told the MSR that they do not feel that they are treated equally and fairly by the majority of teachers. “They are not really trying to acknowledge that we have these problems and that we need to change,” said junior Maray Singleton.

“You’re not treated the same [as White students],” said junior Ellse Anderson. “It’s definitely different in how you are perceived at the school. We are segregated — Whites, Blacks, and Latinos — we are all in our own little [groups].”

Hopkins spokesperson Jolene Goldade stated that her district is “experiencing reductions” in suspensions of students of color by using an approach called “Positive Behavior Intervention and Supports (PBIS).”

Robbinsdale’s Black students made up 65 percent of the district’s suspensions (3,332 of 5157) in 2010-12 — a 15 percent increase from 2009 — although Black students comprised only 26.9 percent of the student body in 2010-12. District Education Director Lori Simon told the MSR that disruptive behavior “and behavior that could be physically aggressive toward another student” is high in Robbinsdale. “I would say those probably are the areas [where] I see a pattern,” she said.

“This year [Robbinsdale] has put into place diversity training for all of our licensed staff, and that will finish up next year,” reported Simon. “More than half of our staff trained this year, and the other half will be trained next year. We also will be working next year with the [New York-based] National Urban Alliance (NUA) to work with both our leadership and all of our teachers around culturally relevant teaching practices.

“We believe that all of those positive things and learning how to effectively work with our diverse learners is really critical,” Simon continued. “We are being real intentional, and it is important for our teachers to have diversity training so that they are aware of how they are treating, working with and teaching all of our students.”

When asked what programs or strategies are in place to specifically address the high Black suspension rate in their district, Simon pointed out that PBIS is now in place in Robbinsdale schools to help reduce suspensions, and disciplinary numbers “are trending down not only in referrals but also in suspensions as well.

“We started it primarily [in 2010] at the elementary level, and we’re seeing some real good results,” she said “We also look at a range of consequences for students outside of suspensions and expulsions. It put into place very clear expectations at the school level so that everyone — students, staff and administration — is really clear on what are the expectations in every area of the school.

“We think we have some good things in place and plans for ongoing work, and we fully expect that our [suspension] numbers will continue to go down,” says Simon.

“We acknowledge that we have a disproportionate number of suspensions with our students of color and need to look at a variety of strategies to correct this,” responded district spokesperson Susan Brott. She added that most Black student suspensions tend to fall under three categories: “threatening and/or disruptive behaviors,” “physical infractions” and “property infractions.”

When asked why the Black suspension rate is so much higher than that of any other student group in Edina, she admitted, “We cannot explain it. We are not pleased with the data and are working hard to address the issue.”

Edina “has also been intentional in training staff in issues of racial equity and cultural competence,” said Brott. “This is a journey for all of us, both as individuals and as a collective staff, and we know that more learning is yet to be done.”

Anoka-Hennepin’s Black student suspensions (1,196 of 4,127) are up one percent in 2010-12 from 2009 to nearly 30 percent of total suspensions in a district where Blacks are only 10.1 percent of the total student population. Despite promises otherwise, our requests to Anoka-Hennepin officials for comment were not met by press time.

Levy-Pounds stressed that along with cultural competency, “A more comprehensive and holistic approach to looking at this issue [is needed] and [we should] not just take for granted that schools are exercising a sense of fairness when they selectively decide who to suspend, who to expel, and who to refer to the school resource officer in a given situation.

“I think it is a problem in the public schools in the city as well as the suburbs,” surmises the St. Thomas professor on Black suspension rates. “I think it is a both-and situation, but I think that the suburbs really have been ignored in this debate.”

She also says that she understands how suburban school officials are claiming a reduction in suspension rates for all students of color, including Blacks. “But when you aggregate students of color and specifically hone in on African American students, that typically is not the case.”

This story is the second in a series. Next week: The MSR looks at the most recent Minneapolis and St. Paul public schools suspension rates data obtained from the MDE.