Minneapolis-based Ameriprise Financial was included in a list — compiled by the Institute for Policy Studies (IPS) — of the top 25 American corporations that last year paid more to their CEO than they did in federal taxes.

Ameriprise CEO James Cracchiolo received $16,252,851 in 2010, slightly less than he made the year before, according to IPS, a progressive think-tank.

Ameriprise earned slightly less than $1.1 billion in profits in 2010, and the federal government paid out a $224 million tax refund to the company.

The 25 companies profiled in the IPS report avoided tax liabilities by utilizing tax incentives or putting their money into tax havens, according to IPS.

The company also spent millions hiring lobbyists and donating to political campaigns in the last election cycle, according to data from the Center for Responsive Politics.

Honeywell, which was headquartered in Minneapolis until relocating to Morristown, N.J., after a 1999 merger, also made the list (see below). 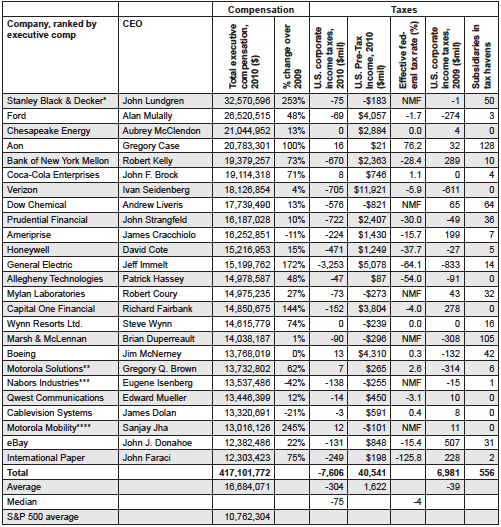