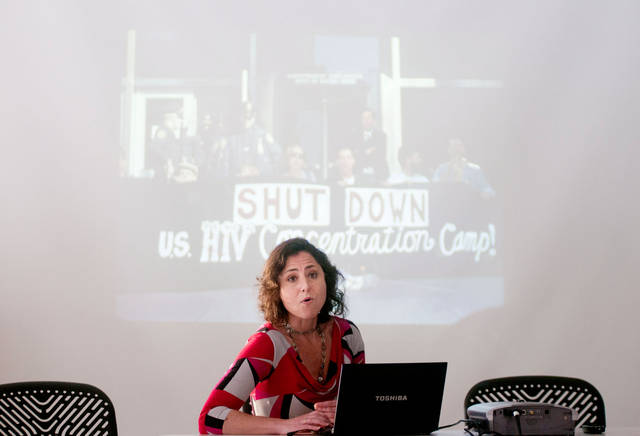 Liz Sevcenko, director of the PhD public history class The Guantanamo Public Memory Project, briefly talks at the Brian Coyle Center in Minneapolis on Saturday evening about past debates concerning whether Guantanamo should remain open. (Photo by Patricia Grover)

Guantanamo Bay is more than 2,000 miles away from Minneapolis, but University of Minnesota graduate students want to make its effects feel closer.

The students presented a multimedia project on the controversial detention center at a public forum at the Brian Coyle Center on Saturday, as part of a larger discussion about how racially motivated surveillance and detention has happened in the Twin Cities.

Their interactive website, “GTMO in MSP,” details how Muslim-Americans living in the Twin Cities have faced discrimination, particularly after 9/11. Stories include Somalis in Minneapolis being questioned after at least 20 local men left to join the terrorist group al-Shabab between October 2007 and November 2008, and officials banning headscarves in the Sherburne County Jail in 2011.

The students first came together during a fall 2012 University course on Guantanamo, and they started making their interactive website.

“The entire thrust of the project was to examine how something like Guantanamo could be created,” said Robert Smith III, one of the group members and an American Studies Ph.D. student. “Detention centers and surveillance of hawalas are rooted in the same kind of extralegal practices at Guantanamo.”

The project became part of an international exhibit that aims to increase public discussion of Guantanamo Bay and its effects. The exhibit will be at the Minnesota History Center through March 16, before making its next stop in Istanbul.

The students said they hope to spark discussion by bringing stories about the detention center to Minneapolis, while focusing on broader issues faced by Muslim-Americans, such as illegal surveillance, financial difficulties and detention without trial.

“Another point of the project was to make visible the invisible,” said Britt Van Paepeghem, a group member and anthropology Ph.D. student.

For now, “GTMO in MSP” needs more work, said Evan Taparata, a history Ph.D. student and group member. He and the other students are planning to add more to their website and continue collecting stories about Guantanamo.

“Academics and lawyers all need to do what they can do,” Smith said. “We’re just doing our part.”

For the couple dozen attendees at Saturday’s forum, Guantanamo and its effects were top of mind. But activists say that’s not the case for most people.

“This is a place that’s remembered and forgotten again and again,” said Guantanamo Public Memory Project Founding Director Liz Sevcenko, who spoke at the event. “The goal is to foster as much talk about this place and its history as possible.”

“I believe in due process, and Guantanamo is a stain on that,” he said.

Ellison, who has drafted a resolution requesting that President Barack Obama respond to inquiries about closing Guantanamo, said the way to get the detention center closed is to educate and engage community members about the issue.

Smith said the effects of investigations, profiling and detention are far-reaching.

“It’s a global issue,” he said, “not just an issue for Minneapolis and Guantanamo.”