The smell of burning sage filled the commons area of South High School on Monday morning as what was planned as a student walk-out was turned into a school-sanctioned assembly — and then ended up being a walk-out anyway. Students from the All Nations Program, which offers American Indian-specific programming at the school, were protesting the lack of visibility of the program, as well as a lack of cultural activities. They said activities such as drumming and “smudging,” a cleansing act using burning sage, were once regular parts of the program but have been discontinued.

Senior Winona Vizenor organized the walk-out, but called it off after speaking with Principal Cecilia Saddler, who allowed the students to have a round dance in the main commons area as well as an assembly in the auditorium. Toward the end of the assembly, after getting text messages from people saying they weren’t being let out of their classes, Vizenor went forward with the walk-out anyway. The students who walked out were not let back into the school until pressure from community activists made the school allow some to come back in to get their jackets and keys.

“This is a really big success,” said Vizenor at the assembly, where around 1000 people packed the auditorium. “This was supposed to be a walk-out.” She explained that the principal, Cecilia Saddler, had offered her space to have a round dance in the commons area and access to the auditorium for an assembly. “At first I said no,” Vizenor said, but when the administration accommodated by saying the students would be allowed to smudge on a daily basis, to begin drumming, and organize a powwow this spring, she decided that with that school support, they would not walk out. That changed later when she found out that some students weren’t being allowed out of their classes. Nearly 300 students walked out. 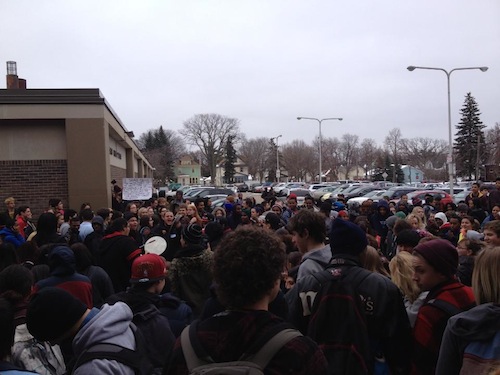 Anastasia Pinney-Valtierra, a sophomore at the school, said right before the round dance in the commons that she was participating because “we don’t get to do a lot of activities like drumming and cultural art activities. We want things back that we used to be able to do. We want to learn our culture so people understand the history of Native people.” 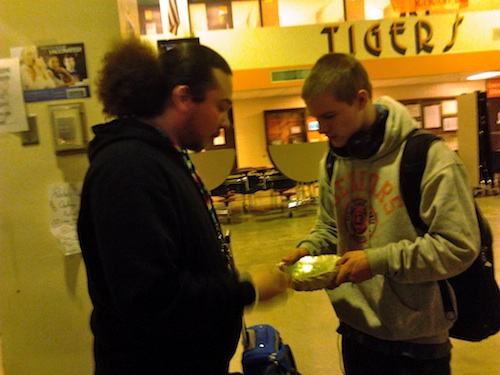 Anastasia’s brother, Mecurio Pinney-Valtierra, burned sage during the round dance in the commons. A senior, he said he wanted the school to bring back the drumming and smudging that the school had done when he was a freshman.  “I chose the All Nations program because growing up, I learned a little, but not a lot about my culture (He’s Anishinabe and a mix of other backgrounds).

“This school has been slowly taking away all our rights,” said another student, Michael Straw.

Principal Saddler said, after the round dance, that she helped organize the event. “I completely understand and support the students,” she said. “For me, how can I bring this into a positive experience?” She said that is why she gave the students room for their event. Video of the activity was also streamed in every classroom, she said.

As for the demands for drumming, Saddler said she’s been working to build a contract with community members. “The funding is there, it’s a matter of coordinating those efforts.” The drum teacher left two years ago to teach at another school, she said, and they haven’t been able to hire a new staff member who can teach drumming.

At the assembly, Vizenor said, “Over the years, we have not been able to smudge, not bee able to drum. We are segregated from the rest of the school. You guys don’t hear about us unless it’s something negative.  We want stability in our program. We want teachers that respect us. We are not the only culture at our school that feels judged or discriminated.  I am sick of being ignorant of other cultures. I’m sick of others of being ignorant of my culture.”

Shawn Gilman, who is Dakota, also spoke at the assembly, first speaking in her Native language, which she translated; “I shake everyone’s hand with a warm heart.”  Gilman said she wants the All Nations students to feel they are part of the larger South community. “We need more support from adults,” she said.

In addition to the students, a number of community activists and organizers showed up to show support, including longtime activist Clyde Bellecourt. Dave Snyder, from Legal Services Advocacy Project, said he felt proud as a South High alum to see the students stand up for what they think is right. Katrina Knutson, also a South alum, said “I was really inspired. The demands were very reasonable. I just remember when I was in high school, I organized a walk-out, and many members of the activist community came to show their support. Knutson remembers the days when she went to South, when students could letter in drumming.

While initially, administrators were not scheduled to speak, students eventually allowed the principal, the assistant superintendent and the head of Indian Education to speak. After the announcement that students would be walking out, Principal Saddler said the students would not be allowed back in afterward.

Mysnikol Miller, an activist, pressured the school to at least let the students get their jackets and keys. Miller saw the event on Facebook. “I came today to show support,” she said. She was worried the students weren’t ready for the walk-out, having not organized marshals, for example, so she felt it was important to be there as a supportive adult. She had concerns that by not letting the students back in, many of them would be missing lunch, not to mention those who didn’t have their coats and keys, so she spoke with the school to at least let students come back into the school, one at a time, and grab their things.

After the walk-out, Saddler said in an interview that it was a walk-out, not a lock-out. “It’s a conscious decision the students made,” she said. “The students have a right to leave, but they have to understand that they are out for the rest of the school day. We have to follow protocols. We support them doing that.” She said the reason for not letting the students back in was “in hopes to make a peaceful way for students to voice their concerns.’