Sociology senior Chelsey Herndon watches her 8-year-old son, Blane, try on a wig and Thor costume and pretend to do battle Friday in the courtyard of the Como Student Community Cooperative. Herndon is a 28-year-old single mom and a Navy veteran finishing her undergraduate degree in the fall of 2012.  (Photos by Marisa Wojcik)

Chalk-scribbled hopscotch trails fill park sidewalks and children race around playgrounds to tag their friends. This isn’t the way summer evenings look for most of her University of Minnesota classmates, but for Bethany Waldron, this is nightlife.

“Taking time away from my family to go to the library is not my priority,” said Waldron.

Waldron is part of a group of University students who said they are struggling to find a balance between their responsibilities at home and in the classroom as student-parents with limited University support.

With emergency assistance funds depleted from the Student Parent Help Center, and an 18-month waiting list at the University’s child care center, some student parents said they are lacking the resources they need to feel like they belong on campus.

According to Susan Warfield, director of the Student Parent Help Center at the University, about 1,000 undergraduates listed dependents when applying for Federal Student Aid.

“Some of them might be married, it might be siblings that they are now responsible for,” Warfield said.

More than 300 of those students are involved with the Student Parent Help Center — an organization that serves student parents, including those who are expecting. The center provides student support, financial assistance, free computer and printing access and discounts on kid-friendly events around the Twin Cities.

“A place to call your own at the U is just so huge,” Waldron said. 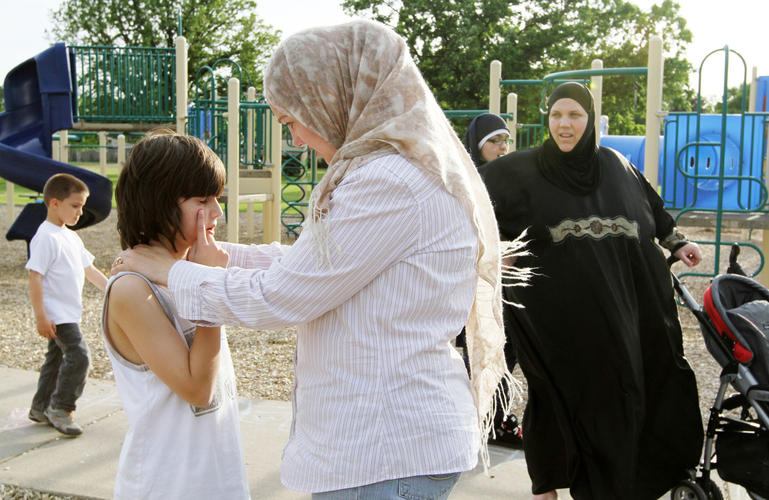 Cultural studies senior Bethany Waldron inspects her 10-year-old son Malik on May 22 at a playground in Fridley, Minn., after he fell while playing. Waldron has three children and expects to complete her degree over a year from now.

One of biggest functions of the SPHC is providing financial guidance.

“Our students have such limited time and financial resources,” Warfield said. “The vast majority of them have the lowest of the low income.”

The center directs participants to specific grants and scholarships tailored to their experiences as student-parents. One of which, the Minnesota Department of Health sponsored Volunteer Service Award, pays students for contributing to the student-parent community on campus by mentoring, tutoring and reaching out to other families.

Carl Moerschbacher, a student and father of four, said his family cannot survive off of part-time wages, and they mostly live off of loans.

In the past, students facing financial difficulties like Moerschbacher were able to seek emergency assistance from SPHC.

But Warfield explains some changes at the center have hindered its ability to provide funding for students in need, like those facing eviction or tuition holds.

“That [fund] has been dried up for a long time,” Warfield said. 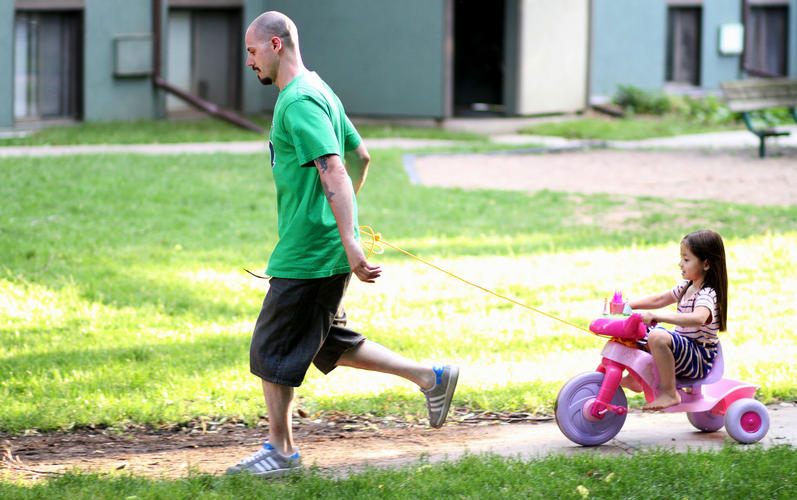 Religious studies graduate Carl Moerschbacher pulls his 5-year-old daughter Aliyah on Monday in the courtyard of the Como Student Community Cooperative during a family Memorial Day barbecue. Moerschbacher and his wife, a student at Minneapolis Community and Technical College, have four children ranging from age 1 to 6. 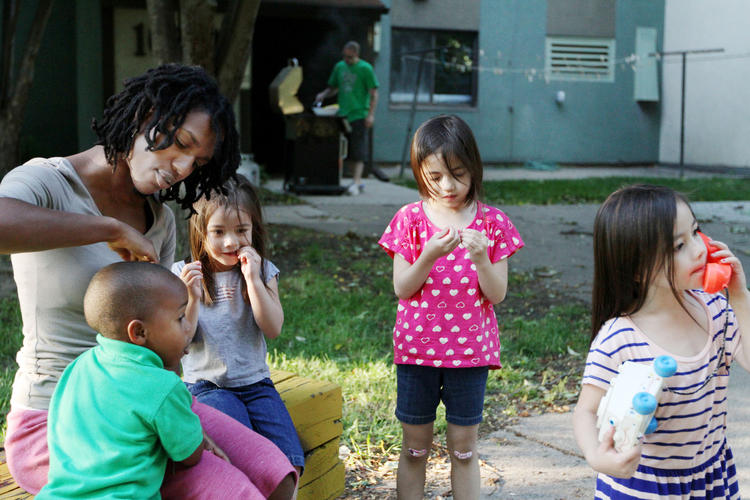 Carl Moerschbacher’s daughters, Aliza, Aida and Aliyah, spend time in the courtyard of the Como Student Community Cooperative with culture and teaching doctoral candidate Shelda Smith and her son, Elijah on Monday.

When Chelsey Herndon applied to the University, she immediately looked into ways to enroll her children in nearby child care centers.

The single mother said her first choice — the University’s Child Development Center — was not an option because of a lengthy waiting list.

“It’s like you have to plan to put yourself on the waitlist even before you know that you are accepted into school,” Herndon said.

According to the Child Development Center, which houses the only University-owned child care facility on campus and operates on a sliding scale, there is a waitlist of 16 to 18 months for new clients to receive child care.

Ann Edgerton, director of the CDC, said the center serves a mixture of faculty, graduate students and a few undergraduate students, with the majority of them being faculty members.

“Once [clients] are here they don’t leave,” Edgerton said.

Student-parents who are seeking child care express their need for accessible and affordable child care.

“It would be really great if they had a daycare on campus just for people that are in the Student Parent Help Center,” Waldron said.

With the convenience of a child care center on campus, she said it would be easier for her to see her children throughout the day.

“I wouldn’t feel guilty, like I am leaving [my son] by himself all day,” she said. “I think that is the biggest challenge about being a student-parent.”