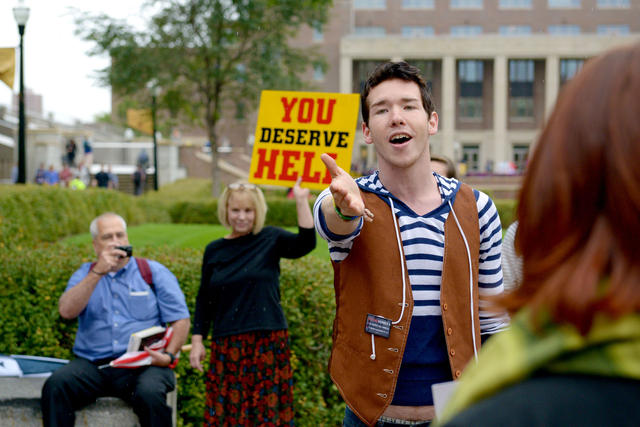 Theater and arts junior Nico Swenson tells a member of the crowd that he loves her Wednesday afternoon on Northrop Mall. Swenson became a ringleader against Brother Jed, who preaches a radical message on college campuses. (Photos by Kevin Schaul)

A woman thrusting a condom into the air yelling “behold your God!” shocked students walking along Northrop Mall on Wednesday afternoon.

Sister Cindy gave her preacher husband Brother Jed Smock a break so she could lecture against using contraceptives to a crowd of about 40 lively University of Minnesota students.

Smock began his three-day stint at the University on Wednesday to preach about topics like premarital sex, socialism and homosexuality. He operates Campus Ministry USA and travels to universities across the country to share his message with college students.

His arrival on campus Wednesday morning was met with a large protest led by several University student groups including Campus Atheists, Skeptics, and Humanists, the Lutheran Campus Ministry and the Queer Student Cultural Center. The groups were joined in protest by many University students passing by to take in the scene or engaging with Smock in what turned into an animated debate.

Smock stood in front of about 40 students holding a sign that read “You Deserve Hell” and yelling messages like “You have been brainwashed by the secular humanists.”

The crowd was generally opposed to Smock’s opinions.

Chemical engineering junior Matt Pang, treasurer of the QSCC, said Smock is a bigot and that a college campus is not an appropriate setting for his message.

The Lutheran Campus Ministry became involved because Smock is “so different from anything we associate with Christianity,” said Pastor Kate Reuer. She said she and the ministry “firmly believe that God’s love exists for all people.” 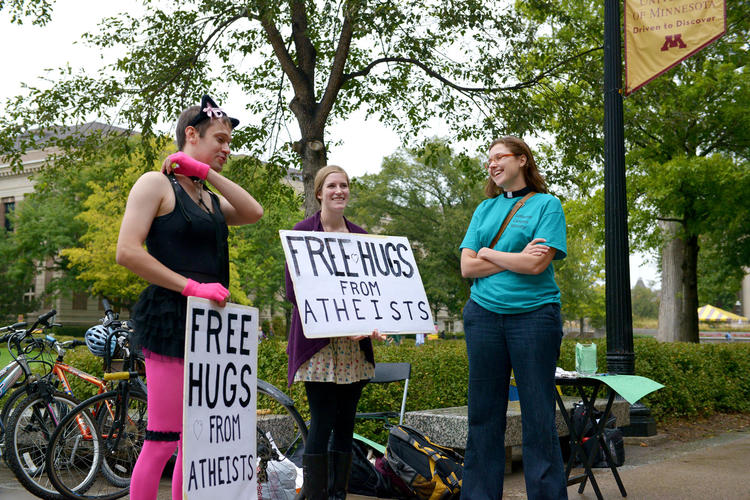 Kate Reuer, campus pastor for the Lutheran Campus Ministry, visits with Andria Bonde, center, and Joshua Brose, both members of Campus Atheists, Skeptics and Humanists. The arrival of Brother Jed prompted many unexpected alliances among student groups with different beliefs.

The University’s protest is not the first of its kind. At the University of Illinois this August, the Illini Secular Student Alliance took similar action. The group made bingo cards mocking Smock to hand out to anyone passing by the scene.

University protesters engaged in other activities including bingo, Twister and counter-preaching to divert attention away from Smock’s messages.

“Religious message or not, anybody who shows up on a college campus preaching bigotry and hate, that’s not a message you want in a thriving community of theist and non-theist individuals,” said Bryan Carver, a member of CASH.

Carver first saw Smock at the University in fall 2011 and watched as a protest grew during the course of Smock’s three days on campus. He said he wanted to make this year’s protest “bigger and better” and “really take the air out of his sails.”

Protesters attempted to block Smock from students and held signs with messages such as “Hate is not a family value” and “Free hugs from atheists.”

Smock said that he expected a protest at the University this week and that he does not have support from any of the student groups on campus. Smock’s support was limited to a few individuals.

Smock told students he was “set free” from his former life as a “brainwashed” professor by reading the Bible. He now goes by “Brother Jed” and spends most of the year traveling to college campuses in the U.S. preaching his message. He said the University is typically an annual stop.

On his website, Smock writes that he will schedule formal debates with atheists, Muslims, Christians or anyone else who disagrees with his message. According to his tentative schedule, he’ll visit more than 35 schools this fall and head west in the spring.

According to Carver, Smock attacks “anyone who doesn’t stand up to his incredibly strict standards of Evangelical Christianity.”

In response to Smock, Lutheran Campus Ministry sponsored a table where people could go to write blessings and words of encouragement for groups Smock preaches against, Reuer said.

Kalysta Schlitter, a University student involved with Lutheran Campus Ministry, said that Smock is “not what people should associate with Christianity.”

Smock will be at the University on Northrop Mall until Friday afternoon, and the protest is set to continue for as long as he stays.