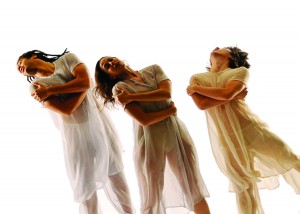 Throughout his life and career as artistic co-director of the Stuart Pimsler Dance and Theater company, Stuart Pimsler has been fascinated by the roles we take on in society, and how those roles “shape how we are perceived by those around us.” In a new work, We, the Others, premiering March 9-11 at the Cowles Center for Dance and the Performing Arts, Pimsler proposes a timely meditation on the old phrase “the personal is always political”: “Can separation and opposition become a connecting place for finding the beauty in difference?”

We, the Others will be presented along with two companion pieces: Tales from the Book of Longing, an episodic cycle of “revealing, highly physical moments of human desire” that first premiered at the Guthrie in 2009, and Ways to Be Hold, a commentary on “societal affluence” that was honored with a 2008 Minnesota SAGE Award for “Outstanding Choreography,” and will be the only US entry at the prestigious Internationale Tanzmesse Festival in Dusseldorf, Germany, this summer.

The inclusion of Ways to Be Hold at Tanzmesse is an affirmation and “a great honor” for Pimsler’s company, which he began with fellow choreographer Suzanne Costello in New York in 1978, before moving the company to Minneapolis in 1999. The Tanzmesse Festival is an exhibition of modern dance begun in 1994 as a showcase and discussion platform for various dance companies in Germany and around the world. Out of 400 US applicants, Tanzmesse chose SPDT alone to represent America. “We know that each of the directors of the Tanzmesse are familiar with work happening across the globe,” says Pimsler, “and fortunately, Ways to Be Hold seems to have moved them.”

Of course moving is not only what SPDT does to people, but also what it stands for. Besides receiving local awards, touring locally and around the country, and helping to put the Minneapolis dance performance scene on the map, SPDT has also worked in the local healthcare and educational communities, presenting wellness programs for youth and those in hospital care based on movement and dance. Pimsler says he hopes to further represent the community in Dusseldorf, bringing “the breadth of work happening” in Twin Cities dance to international attention.

In SPDT’S estimation, dance should speak that which is unspeakable. In a January rehearsal of Ways to Be Hold, the dancers were accompanied by a man speaking a mantra: “I will hold you to your promise to make it safe.” All of society’s roles depend on a social contract, but when words fail, perhaps the oldest form of language we can rely on is that of the human body, moving, and all bodies move in different ways. To that end, Stuart Pimsler’s work is about forming a language from raw movement, and teaching it to others.

“I was interested in trying to explore that which connects us,” Pimsler says of We, the Others, “notwithstanding the limits of our individual identities.” When identities fuse, they create harmony. When our limits are decidedly limited, what do we become? Pimsler and his dancers know that the answer lies in the steps, and the steps can be rather complicated.