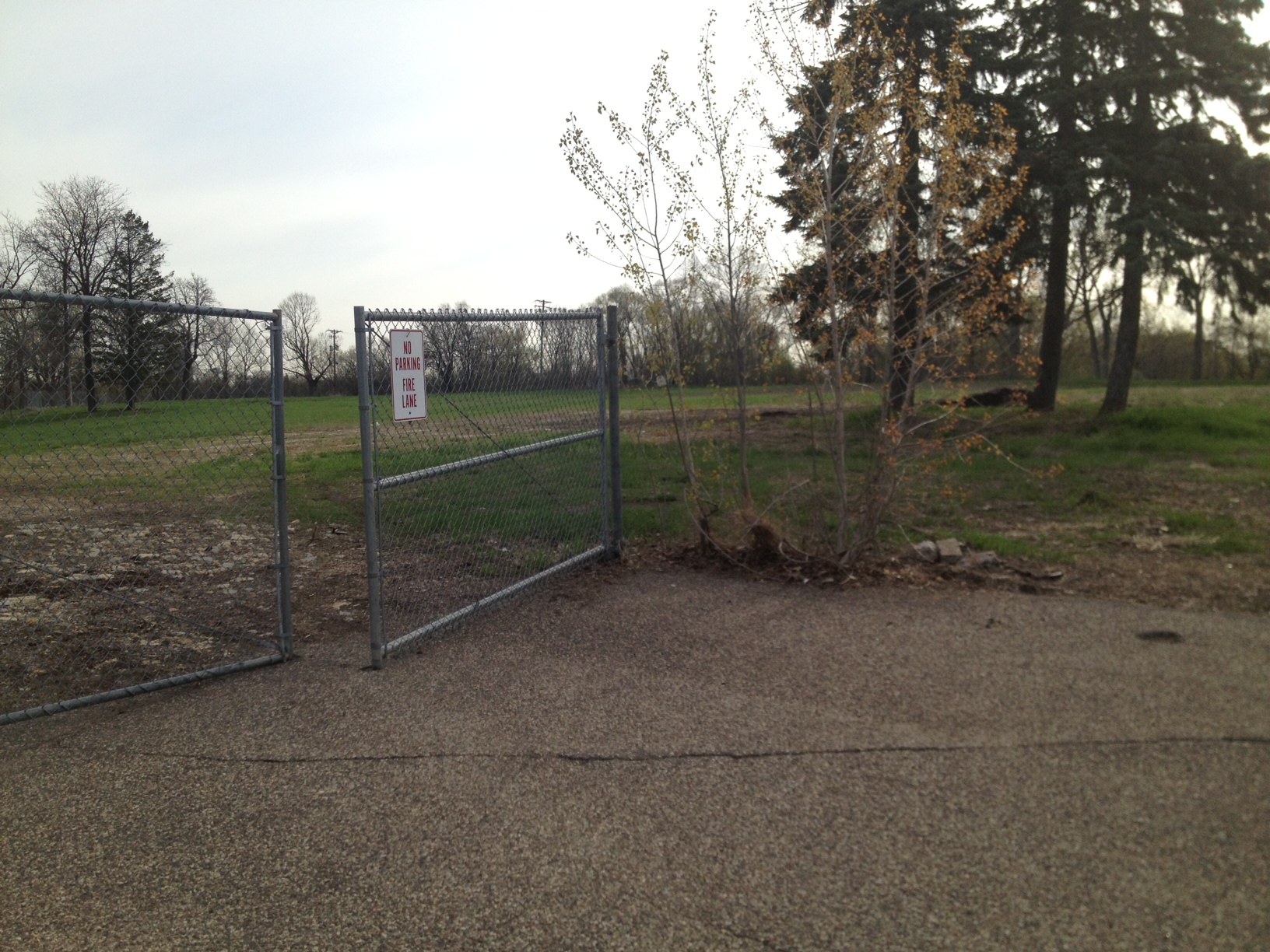 Frogtown Park, the 12-acre space in the 900 block of Lafond Avenue is now one step closer to completion. The project, which is the fruit of years of organizing by Frogtown community members, will establish a five-acre urban demonstration farm on the site and retain other areas as a nature sanctuary and recreation area. This space once housed the Sisters of the Good Shepherd Convent and later belonged to the Wilder Foundation. Following the Frogtown Gardens community campaign, the Wilder Foundation made a deal with the Trust for Public Land in June 2012, agreeing to sell the land at a marked down price of $2.2 million.

Rick Heydinger, acting chair of the Frogtown Farm board of directors described a three-step process:

1) The Wilder Foundation now owns the land. In June 2012, Wilder agreed to sell sell twelve acres that will comprise Frogtown Park to the Trust for Public Land for $2.2 million. (Wilder will continue to own and use the buildings on three acres to the south of the Frogtown Park site.)

3) Once the Trust for Public Land owns the property, it will sell the land to the city of St. Paul for a million dollars. Frogtown Park will be owned by the city.

On June 4, Frogtown Farm and the Trust for Public Land will hold the first annual Farm Fest to celebrate the accomplishments to date, to solicit community ideas for the farm, and attendees will be able to participate in farm activities ranging from soil development to paper-making.

According to Heydinger, a 15-month period of soil preparation and planting cover crops will begin in 2014 to prepare the soil. The first harvest will be in 2015.

Heydinger explained, “We are still in the process of looking at alternative designs for the urban agriculture demonstration site. The Design Selection Committee will be reviewing models from different design firms this summer and the first draft should be out later in fall for input from the community and approval by the Frogtown Farm board.”

Frogtown Park will feature three different sections in all: an agriculture site leased by Frogtown Gardens, a nature sanctuary and a recreational area run by the city. Sam Buffington from the Frogtown Neighborhood Association said, “The Park will feature a sledding hill, a lot of flat space and single-crop demonstration.”  The urban agriculture demonstration site will serve three purposes: healthy eating, wealth creation in Frogtown and community building.

Frogtown has more children than any other St. Paul neighborhood — but these children have less space in which to play, per capita, than children in other neighborhoods. The Saint Paul neighborhood profile generated by MN Compass estimated about 34.6 percent of the overall population in Frogtown to be under 18 and about 5,201 residents to be 17 years or younger in 2010.

Sarah Horowitz, a senior at Macalester College designed a variety of communication materials including a GIS map (below) to demonstrate the lack of green space in Frogtown. Her research showed that children ages 0-17 have 0.006 acres of green space per child in Frogtown. 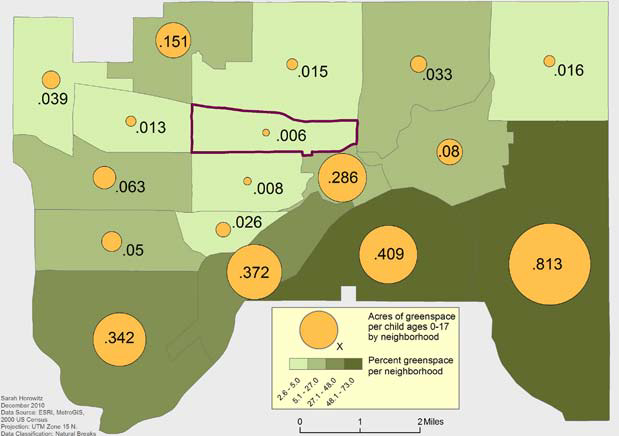 Inequitable distribution of green space: the map shows that Frogtown kids have far less green space per child than kids in every other part of the city. Frogtown is outlined in red. Map created by Sarah Horowitz, and used here with her permission.

Frogtown has been identified by the city of St. Paul Parks and Recreation Department as one of only two areas in the city in need of a new park as reported by the Pioneer Press. Efforts to add green space to the neighborhood include a tree nursery and a community garden. By collaborative effort between St. Paul, Frogtown Gardens’ community activists, and the University of Minnesota, a citizen-run tree nursery was organized in 2010 on the corner of Dale and Lafond Avenues (photo below). Village Gardens is a 30-plot new community garden at a former brownfield site in St. Paul’s Frogtown neighborhood. 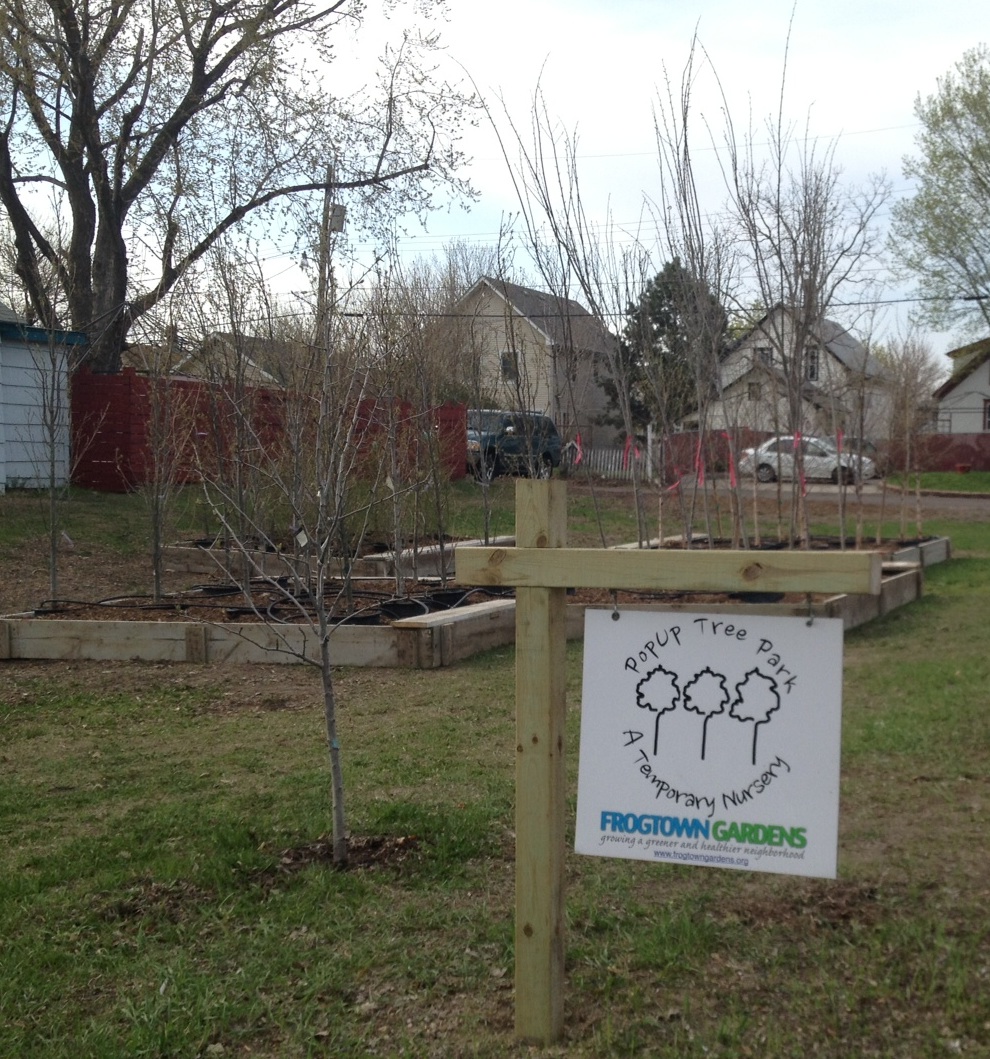 “I feel like the future for Frogtown is very bright,” said Bree Tanner, a 30-year-old Frogtown resident. “Sometimes, I don’t know where to take my children to play in the warmer months. The possibility of the construction of a sustainable green space is really promising.”

Additionally, the continued construction planning and research process has also opened up opportunities for student research and internships. Carolyn Devany, a senior at Macalester College and Frogtown Farm intern of two years was directly involved in the planning process and played the role of a research intern, looking at the different roles that garden spaces are playing in communities, the ways in which community garden spaces are financed, and the ways in which the creation of a park might have a positive economic impact on the surrounding neighborhood.

“I’m currently in the process of writing an honors thesis that explores how Frogtown Garden’s greening activities might allow for more participatory spatial politics at the neighborhood level,” Devany said. “In terms of looking forward, I’m really hoping to see the planning process engage with residents that have traditionally been excluded or forgotten in decision making processes, to really ensure that it is a great public space.”

The Vision Values statement gives more details on the core values and function of Frogtown Garden and Park.

Frogtown Farm: Vision for the future in St. Paul