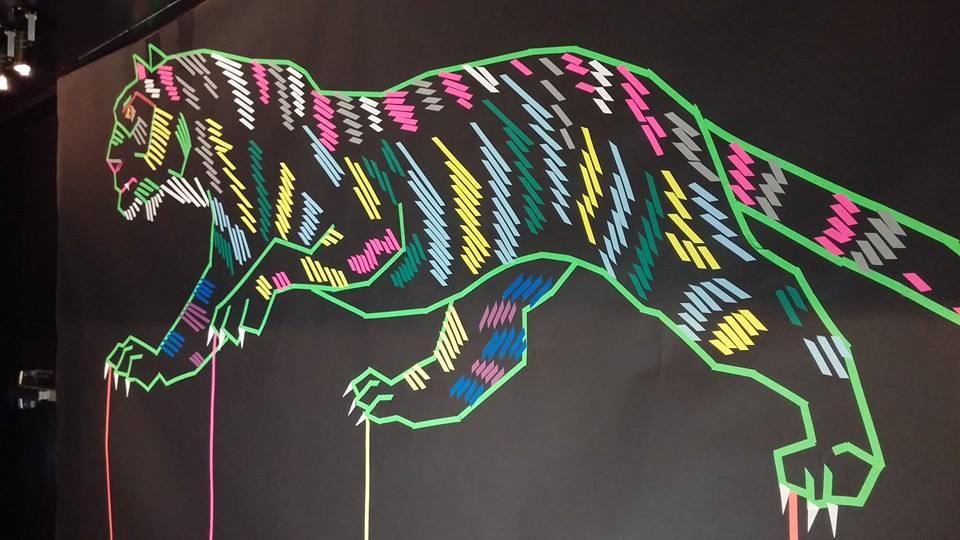 Stripe Tease begins with a couple dancing in silence, moving around each other, interacting yet individual. The relationship, the tension between the men is the focal point. It’s a vignette, a profile of movement, but from a seat in the audience it’s hard not to try to make it the start of a story. But it’s not. Stripe Tease isn’t about a story so much as a series of feelings and expectations.

Ten minutes into the show, the music starts. Guitars strumming, like the start of a rock concert, but again, this is a vignette. It’s not the start, middle or end of anything; it’s a profile of sound. More dancers join enter the stage from everywhere. For the most part, the dancers pair up. Again they interact but they rarely touch; any intimacy is assumed by us.

The music turns into an ambient drone. In tandem, the dancers movements that become familiar and look like shooing flies, building snowballs, moving around each other. The pairs intersect but barely interact with other pairs. It’s a series of near misses. If this were a story this would be the building of characters, the revelation of their motivation and introduction of conflict. But it’s not, it’s a vignette. Somehow the dance is able to blur the lines between abstract and meaning, to build on expectation of the story to bring a sense of drama to the movement.

The movement climaxes as the music becomes more garage rock puck sounding. The dancers move more quickly, their lines become more pronounced. The repetition continues but the actions are new. They dance like airplanes diving or doing flip turns. The series of pairs suddenly looks like a mechanism. Each dancer is a cog in the machine. The focus on the one-to-one relationship gives way to the focus on community in the abstract. Everyone seems to be working together as one, while still dancing as individuals and pairs.

Art has been injecting into the performance in small doses until this time when the curtain is drawn to reveal a series of floor to ceiling stripes and day-glow tigers around the room. The music, the art, the dance crescendo and the dénouement slows the dancers’ movement and turns the music into wavy beach music. That eventually slides back to rock – but only a few chords. The whole song still never emerges – just the expectation. Same with the dance; they dancers continue to move as couples as a community but there’s tension but no conflict so no conflict to be resolved. It’s a series of vignettes and each audience member brings their own story to the movement, music and art I assume and that helps build personal expectations for everyone. The perfect tease.

For more than two years choreographer Chris Schlichting, musician Jeremy Ylvisaker and visual artist Jennifer Davis have been working on Strip Tease. An early iteration of the dance was performs in the summer of 2013 on a Family Free Saturday. The show was looser, bigger, more exaggerated to suit the surroundings – a summer day in a garden. I remember the show and the beautiful streams hung in the trees. And I remember a lot of movement – larger even that the generous stage set up in the Sculpture Garden. The iteration on the inside stage at the Walker is tighter, more deliberate and meticulous. That is what a year and a half of developing and rehearsing will do.

In a post-show question and answer session, we learned that the three had worked together but that it all started with the dance, which began as an improvisation. Although Schlichting allowed that Davis often used the stripe motif and that helped build the base. Upon the dance, Ylvisaker created a series of musical templates, working with Schlichting to make the final selection. While there’s a feel of improv in final work, the music, dance and art are pretty controlled, although Schlichting admitted there was some wiggle room in deference to Ylviasaker’s style and style of his band Alpha Consumer, which also include Michael Lewis and JT Bates.

I found the work to be very successful. For a show about expectation, the result is surprisingly satisfying.