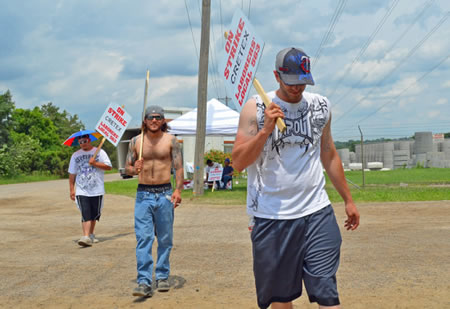 Union workers at Cretex Companies are stepping up pressure for a fair contract by airing ads on three Twin Cities radio stations. Members of Laborers Local 563 went on strike June 19, pledging to walk the picket line until Cretex abandons its attempt to strip workers of their pension benefits.

Since negotiations on a new contract for 38 members of Local 563 began in January, Cretex has refused to budge from its proposal to quit making contributions to workers’ pensions, Local 563 representative Steve Buck said.

“We have told them we have no interest in getting rid of our pension, and they continue to bring that forward as the key piece of their contract package,” Buck said. “They’ve dug in.”

“What would you say if your employer cut your retirement benefits by 80 percent?” one ad asks listeners. “That’s what’s happening at Cretex, a Minnesota company.”

The ad concludes with a call for listeners to “help put a stop to Cretex’s unfair business practices” by calling the company at 763-441-2121 and telling them “Minnesota workers deserve better from a Minnesota-based company.”

In a press release, Local 563 Business Manager Tim Mackey explained the decision to appeal to the public for support.

“The general public has the right to hear how deplorable Cretex is being when it comes to the way they treat employees who having given decades of their lives to work there,” Mackey said. “We hope people listen to these ads and realize what is going on in their own backyards. All of Minnesota should be embarrassed that a hometown company is willing go as low as taking away retirement plans that rightfully belong to the workers who have done all that is asked of them on the job.”

The company’s proposal would reduce employees’ compensation – including pension contributions – by about $4 per hour, according to Local 563. That is the equivalent of a “12- to 17-percent pay cut at a time when demand for construction materials is on the rise,” the union said in a press release.

Cretex has been successful in eliminating pension contributions for workers at facilities in North Dakota and Iowa, and Buck said he expects a prolonged fight in Shakopee, where Local 563 has represented construction craft laborers since 1986.

On the picket line, Jesus Sanchez Jr., who began working at Cretex a year ago, said he and other workers were prepared to strike “as long as we have to.” Retirement is a long way off for Sanchez, but he called the company’s attempt to eliminate pensions contributions a slap in the face of his more experienced co-workers.

“I’m here to support the other guys who have been working here so long,” Sanchez Jr. said. “They don’t deserve it, and they know it.”