If we get the streets right, good things will follow in downtown east. Much hand-wringing is occurring over whether or not there will be good development around the new Minnesota Vikings football stadium in downtown Minneapolis. When we look backwards 30 years at why development hasn’t happened since the current Metrodome stadium was built, we find three main reasons. One reason is some property that remained zoned industrial until very recently. A second obvious reason is five entire blocks of land owned by the Star Tribune blocks didn’t get developed in part because the newspaper was using them and didn’t want to develop nor sell them (this situation is very likely to change so new development can coincide with the new stadium). However, the real culprit is the public realm and a network of streets in the area that are much better suited to racing to and from downtown rather than for creating sustainable neighborhoods. Any successful plan for good development around the stadium will require an honest reckoning for the role of streets in the area.

Think about it, nearly all the streets in the area are either glorified on-ramps for freeways or one-way thoroughfares designed to speed the entrance to or exit from downtown. There’s 3rd and 4th Street, which descend in to a car-friendly cut to access the University of Minnesota – the shortest and most unnecessary freeway in the Twin Cities (luckily this stroad is partially being mitigated by the Green Line light rail). 5th and 6th Streets provide access to and from Interstate 94 to the east (the on-ramp seems to begin at Chicago Avenue). 7th and 8th Streets also access a non-freeway (Hiawatha Avenue (why do we have all these non-freeways?)). 4th and 5th Avenues access 35W. Portland and Park Avenues are one-way couplets intended to speed traffic to and from downtown as a reliever to 35W. Nearly all of these streets have three-lanes for maximum efficiency, and man it works! Coming off these freeways and stroads nothing about the design of the streets intuitively tells a driver to slow down despite a 30MPH speed limit, and it is tempting not to hit 40 on those last few blocks before the city fabric gives way to the freeway decking. Gentlemen, start your engines! Not one of these streets has helped create a good neighborhood. 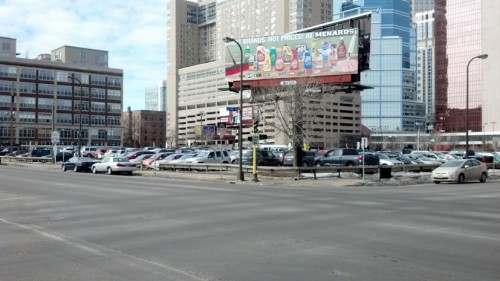 Moreover, as the above image shows, none of these streets is particularly nice to walk along. There is hardly a street tree for shade, a bench for sitting or other amenity to encourage walking, much less many destinations to reach on foot. Just try walking from the Metrodome station to the Guthrie or to HCMC. It is an unpleasant no-man’s land in search of a good plan, as was recently noted by a group of students visiting the area as part of their design competition for the area.

The 2013 Urban Land Institute/Gerald D. Hines Student Urban Design Competition is using downtown east as its location, and members of the four finalist teams made their first visit to Minneapolis on a recent snowy Friday to walk the area. As they did, several students commented how few people were walking. I assured them it wasn’t the weather; hardly anyone walks in this part of downtown unless they have to.

Our walking tour with the ULI design competition students included pointing out the stretch of 5th and 6th Streets around the current stadium, where the three blocks between Chicago and 11th Avenues are divided by a fence preventing any pedestrian crossings (to a stadium!) while the street as designed encourages cars to speed despite a posted speed limit of 30 MPH. Effectively the on ramp to Interstate 94 eastbound begins at Chicago Avenue and this must be addressed. A common complaint is the Metrodome interrupts the grid, but this simple fence dividing 5th and 6th Streets is an even bigger barrier. There is no reason on God’s green earth why a three-block stretch of two streets in a downtown area cannot be crossed on foot. Facing what some call an ugly stadium notwithstanding, the design of the street in this location actively discourages development. As you can see below, my son isn’t wild about it, either. 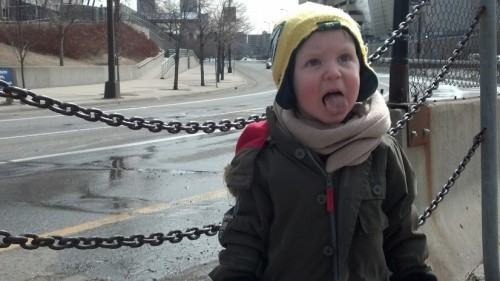 Lo and behold, the four finalist teams’ plans include some measure of making at least one of the streets greener and more pedestrian-friendly. One team’s plan is called “Portland Avenue,” and it gives the street a “road diet,” reducing through traffic lanes, making it two-way, adding trees and other amenities that create a spine of activity that frames development in the district. Students from other cities get this concept. Do we?

Periodic plans for the stadium that appear in the press and the ULI competition show streets somehow magically transformed in to pedestrian plazas. 5th Street in particular seems to be cut off from its westbound Interstate 94 off-ramp entirely. I’m pretty sure these plans have not yet been vetted by transportation engineers, and I fear a lack of spine from planners and elected officials when they sit down at that table and hear that the off and on ramps need to remain. A compromise must be reached to be sure, but I encourage planners and elected officials to be strong and make good streets a priority. Plans for the area, whether they are the downtown east plan approved several years ago by the city, the winning ULI student team, or even the Vikings, call for the area to become a neighborhood (albeit a neighborhood anchored by a stadium). It is imperative that any neighborhood must have good streets. Not having good streets precludes all the good development we are hoping for.

The plan for the stadium area must include better streets and pedestrian connections, including more two-way streets, crosswalks, street trees, pedestrian-scale lighting, benches and public art, no more barrier fences and no parking (surface or ramps) visible from streets. What actually gets built on all the private property is a topic for a related post.

Pedestrian connections from 7th street to the new stadium must be in place along Carew Drive and 10th Avenue. That means crosswalks and traffic signals, and the removal of the barrier fence between 5th and 6th Streets. The same is true north of the stadium, where Norm McGrew Plaza needs an improved crosswalk and traffic signal at both 4th and 3rd Streets as well as a continuous pedestrian connection past the Wasabi building and across Washington Avenue continuing on 9th Avenue to the river.

Let’s indulge the students’ plans and give these streets a road diet, make them two-way, build curb bumpouts, cycletracks, and plant some street trees. Transforming Portland Avenue in to a spine of activity, making it a Main Street for downtown east, makes imminent sense. But don’t stop there; let’s make every street in downtown east a pleasant walk. All streets should become two-way.

The on-street parking meter system should be modernized and priced variably and accordingly for business days, hospital shifts and game days, ensuring there is always on-street parking available, with revenue captured for public realm improvements to the district.

We need not worry about access. People arriving downtown from the east metro and other locations can slow down a few blocks earlier or speed up a few blocks later. After all, some of the freeways originally imagined never materialized (Hiawatha) or no longer exist (State Highway 122). And people don’t need to leave so quickly; what’s the rush? Stick around, downtown is fun! Why not move in? Exactly why we need three lanes of 8th Street racing eastward through downtown when only one of those lanes actually survives to access Hiawatha Avenue (not a freeway) is beyond me.

Visitors can also choose to use our multiple transit options to arrive downtown. Continuing to allow streets that encourage driving fast will limit development and the value of east downtown. Slowing the traffic and building streets for people will greatly encourage development and increase real estate value (and tax revenue lost to the stadium).

We cannot directly control what gets developed on all of the private development parcels in downtown east, but we can control the streets. We are giving the Vikings a boatload of money to stay downtown; the least we can do is expect good urban design that adds value to our city. That starts with the public realm. We must do everything in our power to build an improved grid of streets and public realm to make downtown east a more livable neighborhood.