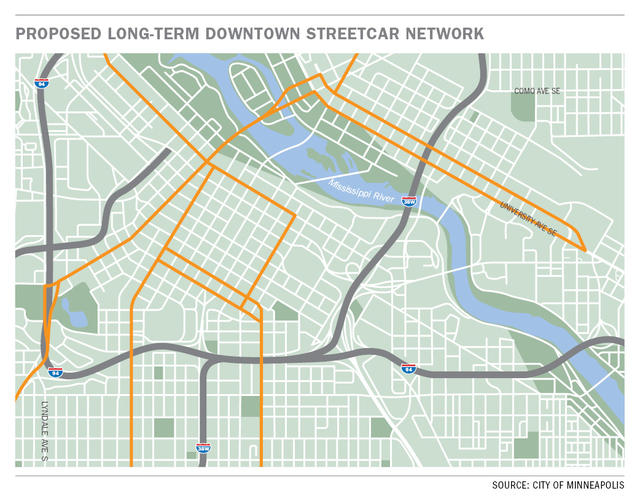 Although the last streetcar rolled out of Minneapolis in 1954, city officials are moving forward on plans to bring the city’s extensive streetcar network back to life.

The city recently submitted an application for $900,000 in federal funding to study the details of the project more closely, Minneapolis Transportation Planner Anna Flintoft said.

The analysis would include costs for construction and operation, environmental effects, community input and possible economic development related to rebuilding the network, she said.

“It’s the next logical step in terms of the technical analysis that needs to be done,” Flintoft said.

Plans to revive the streetcar system in Minneapolis date back to 2006, when the city began a feasibility study to determine if rebuilding the network would be possible and beneficial to the city.

The study, completed in December 2007, was part of Access Minneapolis, a 10-year plan to address issues and options related to transportation.

The streetcar study examined several aspects of the project – from basic cost estimates to possible track locations to ridership numbers – and found that rebuilding the streetcar network could ultimately be beneficial for the city, Flintoft said.

Streetcars set off economic development because of their permanence and frequent stops, Flintoft said.

Additionally, other cities that have rebuilt their streetcar systems, such as Portland, Ore., have seen higher ridership than on similarly located bus lines, she said.

Improving public transit, including streetcars, has also been a long-term goal of Minneapolis Mayor R.T. Rybak. Rybak has said streetcars could reduce the city’s oil dependency and create more of a community downtown with the shorter lines and more frequent stops.

If the city receives the federal funding for the analysis, it will focus most of its resources on two starter lines – the Central Avenue line, which would run along Central Avenue Northeast from Washington Avenue to the Columbia Heights Transit Center, and the Nicollet Avenue line, which would run along Nicollet Avenue from 46th Street South to Washington Av enue, according to the 2007 Streetcar Feasibility Study.

The city won’t know whether it will get the funding until fall of this year, Flintoft said.

Streetcars land between buses and light rails when it comes to cost, Flintoft said, although the price can vary depending on the line’s location.

While the upcoming study would determine more specific costs, the project could run between $40 million and $50 million per line, according to the 2007 study. Each line is between two and 3 1/2 miles long, and there would be seven lines total.

By comparison, the 11-mile Central Corridor Light-Rail Transit line is projected to cost $957 million to construct.

In addition to the two starter lines, five other potential track locations, including two running through the University of Minnesota campus, are being considered.

Funding is a concern for the project, Flintoft said. In the past, other cities that have tried to rebuild streetcar lines have had to completely finance the projects, although within the past year the federal government has started supplying grant money for streetcars, she said.

Streetcars essentially use the same technology as light-rail trains but stop more frequently and run in the streets instead of in separate, designated tracks, said Aaron Isaacs, a historian at the Minnesota Streetcar Museum and a retired transit planner.

“You could take that old wood streetcar and put it on the Hiawatha line, and it will run,” he said.

The problem comes from the fact that streetcars run on tracks in the streets, subjecting them to traffic delays while not

allowing them to take different routes or easily maneuver like buses, Isaacs said. The city will examine this issue in the upcoming study, Flintoft said.

Streetcars in Minneapolis were built mainly between 1870 and 1930, Isaacs said, and were popular during that time due to the lack of automobiles and the ease they provided for traveling through the city.

In their heyday, Twin Cities streetcars had more than 500 miles of tracks, Isaacs said, most of which ran in the city, though some extended to nearby suburbs.

“If you see a Metro Transit bus route today, there’s a pretty good chance it was a streetcar line,” Isaacs said.

Streetcars maintained their popularity through World War II because of rationing on gas, rubber and other automobile supplies. After the war, however, many people moved to the suburbs and purchased vehicles, decreasing the need for streetcars.

The city began to tear out streetcar lines after 1945, and by 1954, the last of the streetcar operations had been shut down.

In 2001, though, Portland, Ore., set off a trend by rebuilding its streetcar system, and many cities have been following suit due to its success.

The permanence of rail attracts businesses, Isaacs said, and is more attractive to visitors and occasional users.

Streetcars also offer a smoother ride than buses, Flintoft said, and the tracks and cables make it easier for users to spot stops or routes.

In addition to concrete benefits, though, streetcars seem to have an intangible appeal for people, Isaacs said.

“People just seem to like rail more than they like buses,” Issacs said. “There is this sort of undefined sizzle factor when it comes to rail.”