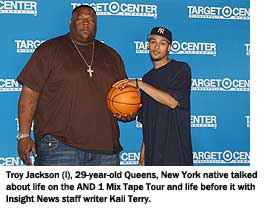 Regarded by youth all around the world as one of the hottest summer basketball tours, The AND 1 Mix Tape Tour visits 30 cities this summer from June 10 to August 27, featuring some of the top streetballers.

The AND 1 Mix Tapes are a series of basketball videos and DVDs of highlights from playground legends all over the country. In only 6 years, the Mix Tapes have reached over 675,000 basketball fans and elevated the Mix Tape Tour players to international icons. With a roster of 14 players, the team travels different cities in search of the next top player. In each city the tour hosts an open run, expo area and game showcasing the talented streetballers.

This tour features the newly signed Spyda, Baby Shack, Pharmacist and Spinmaster as well as streetball legends Main Event, AO, Escalade and others taking on the best basketball talent each city can bring, with local ballers vying for a spot on the roster and an endorsement deal with AND 1.

AND 1 Veteran ball player Troy Jackson AKA “Escalade” went one-on-one in an interview with Insight News. The 29 year-old Queens, New York native talked about life on the AND 1 Mix Tape Tour and life before it.

Insight News: Now that where in the eighth season of AND 1 Mix Tape Tour what can people look for that separates this particular season from the rest?

Escalade: We came out with the AND 1 Mix Tape Vol. 8 last month and we are on the fourth season of the [ESPN 2] TV show ‘Streetball.’ So, its real exciting and good times going on. We are not the Globetrotters. When you watch us you not gonna see the same show every night. You might see me dunk on a dude tonight but then I might not do it the next night. Or, you might see Main Event do a 360 dunk over a motorcycle one night. You never know what we gonna pull out of our hat. Its gonna be different every night and its gonna be incredible every night.

IN: What do you say to the references being made that compare AND 1 games to staged WWF Wrestling matches? For example, the Entertainers Basketball Classic (EBC) claims that the games are not official because nobody sticks defense.

ES: Numbers don’t lie! We just won an Emmy. We have over 20 million viewers a week. We are the number one selling sports DVD in North America. So if were not official and they feel they’re official, let us see their numbers. That’s like a rapper who claims to be better than Jay-Z but can’t sell any records. So, if that’s the case lets both do a show in equal arenas and see whose show is more packed. You can’t compete with the machine.

IN: There are kids all around the country mimicking the tricks and stunts they see you guys performing and trying to add it to their offensive repertoire. But when it comes down to organized tryouts, there not making the cut because that’s not how the game of basketball is played. What do you say to these kids?

ES: I was a high school All-American so I wasn’t doing all these tricks I went in the games and got 30 [points] every night. None of the guys on our team started out doing tricks. This is what we wound up doing. I wanted to play in the [NBA] league. I mean this is a great consolation prize, but I fell short of my goal. I always tell kids learn how to play the game before anything else.

IN: Is playing in big stadiums in front of large crowd something that is new to you?

ES: Oh naw! I played in front of 60,000 people in the NCAA Elite 8 Tournament. I played at Louisville for 4 years where we went to three Sweet 16 and Elite 8 tournaments. I played against everybody you can think of from Tim Duncan (Wake Forest), and Vince Carter (UNC) to the O’Bannon brothers the year won the national title with the UCLA. I even played in Minnesota in the 1997 NCAA Tournament against Tim Duncan at the Metrodome…I always been one of the hottest dudes in New York year after year.