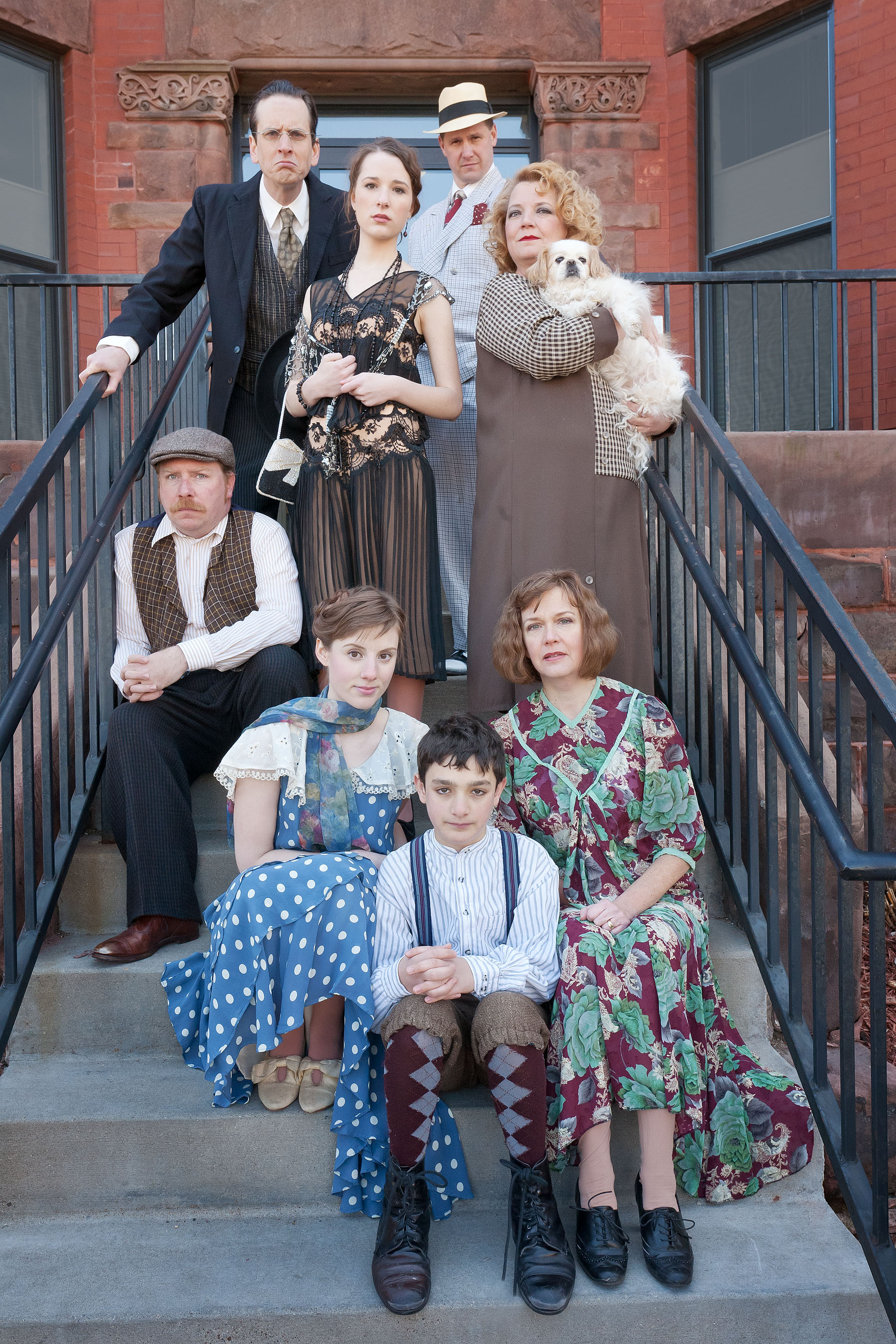 Whenever somebody trots out a play from the early 20th century, even a Pulitzer Prize winner such as Elmer Rice’s Street Scene, a thought immediately leaps unbidden into my mind: “Isn’t that old play going to seem a bit creaky? Won’t the dialogue and the characterization and the plotting feel a little clunky to a modern audience?” Since Girl Friday Productions is presenting Street Scene, that should have been my first clue not to worry. (After all, I’d seen what they did with Thornton Wilder’s The Skin of Our Teeth.) Now put Craig Johnson in the director’s chair, then assemble a cast just as good as it is huge (and it’s mighty huge: 12 men, 11 women, 3 kids, and a dog—all 26 humans having speaking roles, some of them several). Street Scene is so beautifully orchestrated, it’s almost musical.

(I just looked at my old Skin of Our Teeth review. I said that one “practically sings.” Girl Friday Productions has a knack for choosing plays that sound like real life, but are so expertly written, acted and directed that they flow like poetry. It’s a special gift, and a joy to watch. You don’t take it in so much as you just let it wash over you. It’s a lot of fun to give yourself over to the play like that. Doesn’t happen very often. Kurt Weill turned this play into an opera but viewing the original like this makes songs seem completely unnecessary.)

It’s 1929 New York. Two tenement apartment buildings, stuffed with people, sit side by side on a sweltering June evening, and the day that follows. Everyone’s trying to find a way to stay cool, which involves music, ice cream cones and a generous helping of gossip (most of it funny and good-natured, but some of it has a real sting). This neighborhood is less of a melting pot and more of a stew. The ingredients don’t always mix together well, though they do try. You’d think it’d be hard to keep all the people and plotlines straight, but Street Scene is so precisely written, and the actors so in tune with all their characters, that it’s like being dropped in the middle of a big, live action, Dickensian soap opera. (And I mean that as a compliment.) It feels like a very authentic window on another world in another time.

There’s the irresistible musical Italian couple, piano teacher Greta and street musician Filippo Fiorentino (Amdanda Whisner, Sam Landman), a nearly perfect marriage as long as they don’t stumble into the sore subject of the fact that they don’t yet have any children. When they do graze this sensitive topic, you feel a little sorry for them.

Hard to avoid the topic of babies when the upstairs neighbors are in the throes of labor with their first child. The wife is unseen but loudly heard. Her adoring and adorable husband Daniel Buchanan (Joel Grothe) is a clueless hit with the other ladies on the block. He’s one of the only men here who doesn’t think he’s God’s gift to the female of the species. One rule in this community seems to be that all married men are charming, as long as they’re married to someone else.

The caretakers of the property are frisky new parents Olga and Carl Olsen (Mary Fox, Nathan Surprenant), good-natured people with the thickest accents on the block. Fox, completely transformed, also does double duty as Laura Hildebrand, a woman abandoned by her husband, trying to rasie two children on her own (Collan Simmons, Jillilan Jacobsen)—and about to be evicted. (Honestly, until I read my program, I didn’t realize it was the same actress. In characterization and look, Fox is a wholly different person.) Alice Simpson (Katherine Kupiecki), the condescending lady from the local charity organization, casts a cold overseer’s eye on this unfortunate single parent family.

Speaking of a cold overseer’s eye, Emma Jones (Ellen Apel) certainly thinks she knows how to keep the neighbors in line. Perhaps she should look to her own house. Though her husband George (Brian Columbus) is well trained and knows his place, Emma’s children are a mess. Son Vincent (Gary DuBreuil), a young cab driver, is a racist bully. Daughter Mae (Shelby Flannery) stays out all night drinking and carrying on with men of questionable character like Dick McGann (David Beukema). Still, Emma sure knows how to wrangle her dog Queenie (Pebbles, a canine that is one big wide-eyed grin, fascinated by all the people sitting out there in the dark staring at her.)

And, as Tom Lehrer used to sing, “everybody hates the Jews.” Abraham Kaplan (John Middleton) bangs the Bolshevik drum loudly against economic injustice whether anyone wants to listen or not. His long-suffering daughter Shirley (Laurel Armstrong), a schoolteacher, tries to keep his diatribes to a minimum and protect him from the people he riles up. At the same time, Shirley needs to help raise her college student brother Samuel (Logan Verdoorn) and keep him on track to law school. Samuel is often too smart for his own good, certainly too smart for this neighborhood. But his heart sticks close to home.

Samuel is smitten with his best friend, Rose Maurrant (Anna Sundberg), daughter of the troubled Irish family next door. Her younger brother Willie (Naveh Shavit-Lonstein) is out getting himself into fights. Her father Frank (Bob Malos) is a stagehand with a drinking problem. Frank is also a distant disciplinarian of a husband, leaving his wife Anna (Kirby Bennett) so starved for attention and conversation that she turns to Steve Sankey (Dan Hopman), a charming man with a family of his own to whom he should be attending. Anna and Steve are so careless that the entire neighborhood is talking, which you know can’t end well. (Spoiler alert posted in the lobby: gunshot warning. There will be stage blood before the night is through. Quite a lot of it.)

Like mother like daughter, Anna has a married man from the office, Harry Easter (Eric Knutson) sniffing around after her once working hours are over. But Rose is just as drawn to Samuel as he is to her. Samuel and Rose are a mismatch on several levels, but you can’t help rooting for them to find a way to make it work.

And that’s. Not. Everybody. Anna Olson, Wini Froelich, Byron Adams and Indira Addington round out the ensemble. Katherine Howoritz’s sound design augments the live offstage voices and colorful passersby peppered throughout Rice’s script and Johnson’s staging. The sound opens this heavily populated stage out into the dark into the city beyond. Joel Sass’ tenement set is massive (and impressive), but it is a small part of a much larger metropolis in a still larger world. Kathy Kohl’s vivid and detailed costumes keep us rooted in the past, allowing much of the cast to play multiple characters with ease, and then bring us back to the present. Key to this leap, actors Adams and Addington, in a lovely directorial touch from Johnson, bring us simply and beautifully from the early 20th right up to the early 21st century. The immigrant experience, and the draw of a better life in America, are always part of our national story.

Street Scene is about America – a great big chunk of America. No single work can encompass it all, but Street Scene sure makes a major dent in that task. It’s about the struggle to fit in, and also not lose your identity or beliefs. It’s about the challenge of communication, and connection – feeling alone even when you’re surrounded by people on all sides. It’s about yearning, and dreams, and love. It’s about learning to live with and push beyond life’s little disappointments. And it’s about pulling together as a community when the unthinkable happens, when kind people get kinder, and even the stoniest of hearts crack open a little. Street Scene is enormous, and enormously satisfying. Very highly recommended.