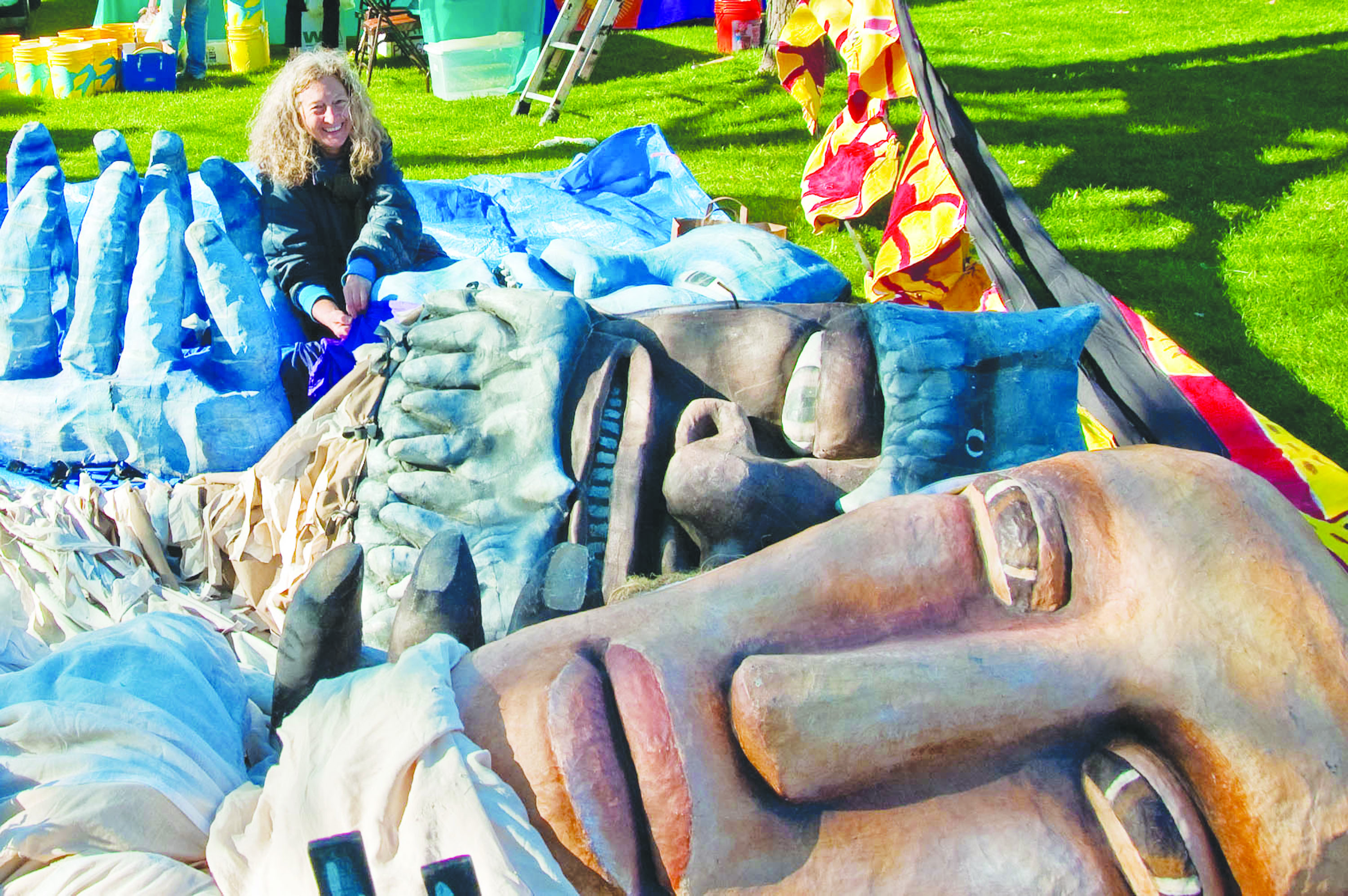 Is the MayDay Parade and Ceremony an unlikely miracle, or is it inevitable that something like this would emerge from this particular community? Most of the people I asked this replied with some variation of “a little bit of both!” On the one hand, it’s unique, and so powerful compared to the perceived resource and power of this poor-to-middling cluster of neighborhoods, but on the other hand, people in South Minneapolis have a hard time imagining their lives without it.

This is true for no one more than Sandy Spieler, quite literally the midwife of the May Day Parade and Ceremony, or just “MayDay,” as it is known. (Not to be confused with May 1, which it obviously refers to, MayDay in Minneapolis means a specific event on the first Sunday in May.) When Sandy and friends, then the Powderhorn Puppet Theatre and three collaborating groups, put together the first parade in 1975, they were not planning to do it for the rest of their lives. Most 20-somethings don’t think in those terms, and certainly not in heady early May, when the snow has just melted and the Vietnam war has just ended. But even that first event, small though it was—100 people, two accordions and a few puppets—touched its participants in a powerful way. It even touched some observers, not allowing them to remain passive, but sweeping them up into MayDay’s already developing future.

Sandy is one of very few of our generation (she was 21 at the first MayDay) who has done the same work her whole adult life. I asked her how that feels, why that is, did she ever have doubts? She said she never had thoughts, as many do, of “advancing,” but only of going deeper. She said she has a vocation, a calling. There were two separate years that she was away from In the Heart of the Beast. The first was due to winning a Bush fellowship and happily coincided with the birth year of her son, Micah. The second came at a time of personal and global struggle, and when she felt that going deeper was not working. Having never completed her college degree, she went away to England for a year and gained a master’s degree. Doing this, she was not only renewed and re-empowered, but learned that she did in fact know a lot already, and came back from the year abroad “settled” and confident that she could keep deepening the work her life is dedicated to. 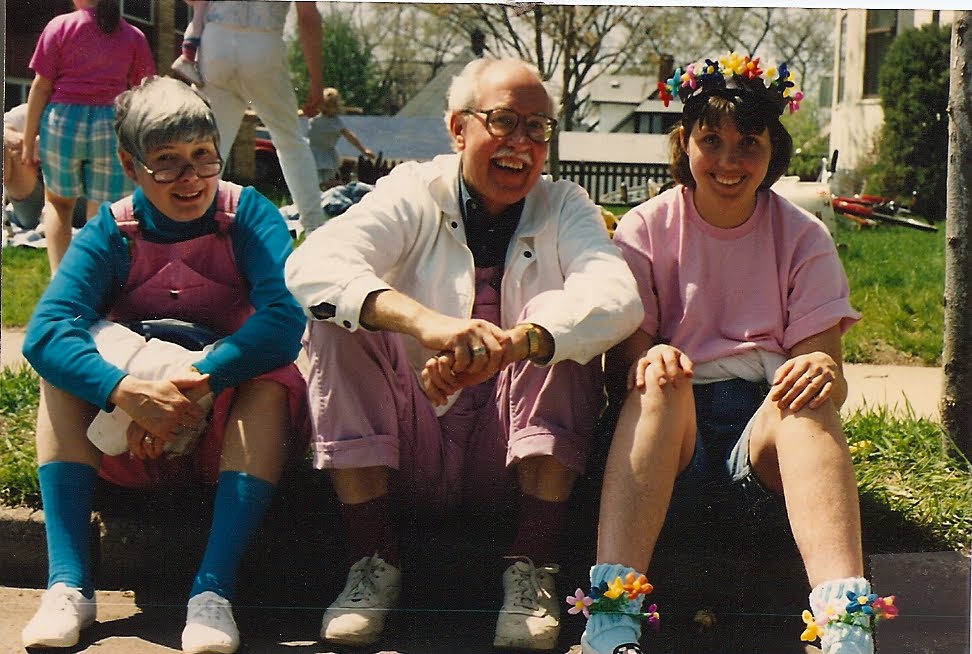 Sandy often refers to the roots of MayDay as the Red root and the Green root. In our talk about the 39 years, she also referred to sweet times and bitter times. I had asked her about how the events of a particular year seemed to inform the themes of MayDay. I see from her own historical document that the second MayDay happened in the heat of the infamous Co-op Wars. Her personal crisis that led her to sojourn abroad coincided with the aftermath of 9/11 and the early years of the Iraq War. I was also struck in reading her document by how much poets and poetry were involved in MayDay. The wordy part—poetry and storytelling—is another important piece of MayDay, summed up in the carefully chosen “theme and story” of each MayDay since 1976. Roy McBride, Florence Dacy and many other poets have been key to MayDays past. Many will be key to its future.

Pasha Milbrath didn’t see the first MayDay parade, but her parents did. A rather conservative couple, Bill and Maureen Milbrath were neighborhood activists. They were stopped by the closure of Lake Street and saw this interesting little parade of hippies. Entranced, they followed it to Powderhorn Park and watched the ceremony. They told Pasha, then a high school senior, “You want to see this next year.” And she did, and saw it almost every year since then. About 20 years ago, she started helping organize the parade, and later participating in the ceremony. For the last six years, she has also been a stalwart member of the sewing team. I asked Pasha and most of the others I interviewed, “How important is it to you that there is a 50th MayDay and beyond?” “It’s my most important holiday, a necessary ritual, a family tradition,” she said; [if it went missing] it would be like Christmas disappeared.

Mark Safford is one of the art staff, since 1999. This year he is coordinating a section of the parade called Silent Spring. In response to my “miracle or inevitable” question, Mark said it was both, that before MayDay, the community had other similar rituals, but the particular gifts of these artists/activists give it added energy and power. About MayDay, he says, “Every time it happens, it’s more itself.” “Every time you do ritual, there is teaching, and the teaching is mutual.”

Harry Waters Jr., who teaches theater at Macalester College and lives in Powderhorn, came to MayDay because “it was important for me to have Macalester students have a community immersive experience.” Although “just a participant” this year, he has been a parade section leader and ceremony actor at least seven years. 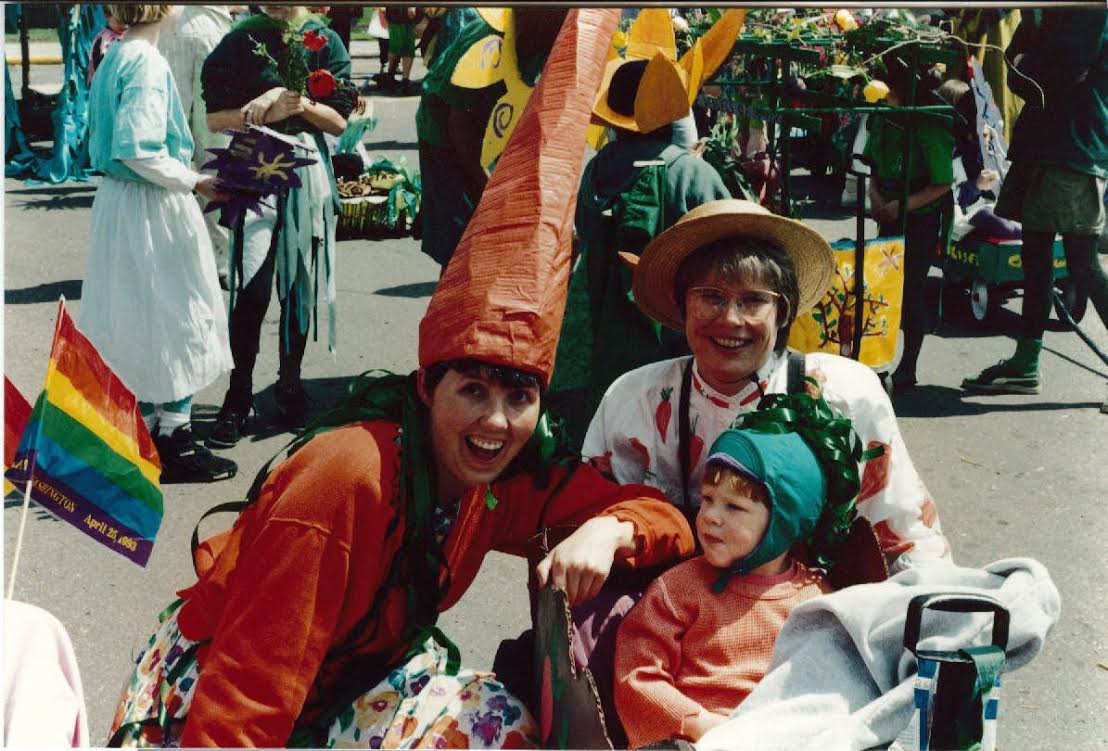 Hannah Rivenburgh was a Macalester student who found MayDay on her own. I asked her what had prepared her for working on MayDay and she said the main thing was that growing up, she had nothing like MayDay. (Me too, Hannah.) She was one of many who said that MayDay is a major reason why they call the Twin Cities home. (Me too!) When I asked her how important it was for MayDay to survive, she said this: “While MayDay takes the work of many, it takes the incredible over-work of a few. I worry about the continuity of the parade to new generations—not in the willingness to work hard … not just pulling all-nighters finishing a massive puppet, but the aspects of fiscal solvency which must be struggled for.”

While Hannah is the youngest of my interviewees, the oldest, I think, is Loren Niemi, the executive director. He is the other one thinking about the hard question of money. Although he has only been executive director at HOBT since 2011, Loren has been in many parades, often in the past portraying the “bad guys,” which he sees in keeping with his traditional clowning history. Nowadays he leads the bucket brigade. Throughout the year, he writes grants, runs the show, and keeps reminding the staff that they always have to sell and ask for contributions. I didn’t ask Loren how important it is that there be a 50th MayDay and beyond. We in the older generation have learned to plant trees we don’t always expect to sit under.

Sandy says it doesn’t really feel like 40 years. This years’ theme (Wonder? Wonder!) is cryptic, but the bigger story is almost worked out as I finish writing this. Sandy says it’s always the same theme, really, even though it’s in different words. See you in 2024, I pray.