Growing up, I spent a lot of time with my maternal grandmother, who arrived in the U.S. from Norway as a young child. Grandma was pretty adamant about Norwegians being the best of the Scandinavians. I’m sure she would not have approved of the Lutheran stand at the State Fair selling “Swedish” egg coffee–that, of course, was a Norwegian concoction.

Grandma also did a pretty kickass job of cooking and baking. I never tried the lutefisk–even at five years old, I wasn’t stupid–but the various other treats she whipped up were beyond delightful. Especially her homemade lefse. There were three choices when it came how to accessorize the lefse: butter, butter and sugar, or butter, sugar, and cinnamon. Again, being very smart, I went with all three.

I couldn’t help but wonder what Grandma would have thought of my stopping by the Finnish Bistro in St. Paul recently. Bad enough that her part-Norwegian descendant would grace a Finnish establishment with her presence, but even worse–I ordered lefse. But not with the usual accompaniments. 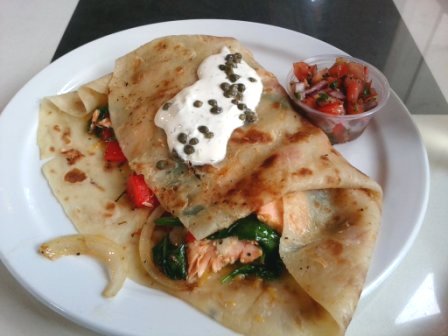 I ordered the Lohi Lefse. “Lohi” means salmon, and you can see exactly that peeking out of the folded potato pastry. Also? Sauteed onions, spinach, and red peppers, with housemade cucumber dill sauce, and a little side of a tomato-red onion salad.

The horror! Salmon! On lefse!

The deliciousness! Salmon! On lefse!

Sorry, Grandma. I admit it. I visited the Finnish place, I ate the Finnish lefse, and I would do it again.

Is this a good time to mention that I’m also a fan of the American Swedish Institute?