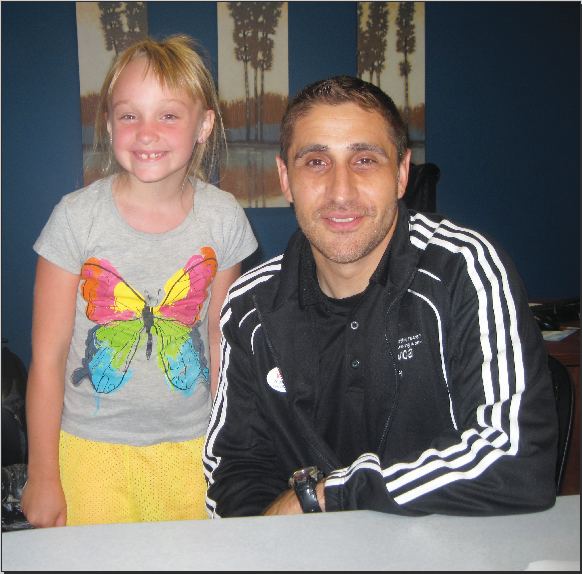 A few weeks ago I met with the General Manager of the Midtown YWCA, Mr. Alex Aguilar. If you haven’t ever been to the YWCA, it’s located at 2121 East Lake Street, near the Hiawatha Light Rail, and across the street from where the Midtown Farmers Market sets up every Tuesday afternoon & Saturday morning during the growing and harvest season.

My mom came with me to meet Mr. Aguilar. We first went to the front desk. Soon afterwards, he came out to meet us then we followed him down the hallway to his office. For the interview we all sat around a little table in front of his desk. We began by going over the list of questions I had sent him the week before. Mr. Aguilar had replied with answers to the questions, now that we were face-to-face he provided more detail to his responses.

Originally from Chicago, IL (where my grandpa used to live) he found out that the YWCA needed a new General Manager. “Upon researching the company, I found the mission and goals to be very virtuous and honest and something I would be excited to be a part of.” He knew the YWCA Vice-President and she shared the goals of the Midtown YWCA with him – which motivated his move to Minnesota.

I was surprised to hear he has only lived here since April 2012. So that means he’s only lived through one Minnesota winter. “But, what a winter!” he added. This is his first job with the YWCA. He came to Minnesota specifically for the General Manager but he has been working in the Health and Fitness Industry for over 15 years. A good majority of those years were spent working for non-profit organizations.

Mr. Aguilar mentioned that there are over 100 people employed at the Midtown site alone, and they utilize over 100 volunteers throughout the course of the year. The number of volunteers varies throughout the year; based on the number of programs that run concurrently. One of the things he likes most about his job is, “The fact that I get to have a positive influence in peoples’ lives. Helping people grow through tough problems, especially when they come out on the other side of those problems and feel like a winner!”

He gave me a pamphlet that covered the history of the YWCA of Minneapolis from when it began here in 1891 up to today. The first Board President was Mrs. W.A. Miller. “The YWCA (was founded to) empower and help women during hardships. The Y works to ensure equality and eliminate racism. Most other gyms/health clubs don’t care about equality. The Y wants to make sure everyone is well – physically, mentally, spiritually.”

Additionally, he added that he loves the Mission of the YWCA – The YWCA of Minneapolis actively lives its mission of eliminating racism, empowering women and girls, and promoting peace, justice, freedom and dignity for all. “Especially the part about empowering all women.”

It certainly was fun to meet with Mr. Aguilar and learn so much more about the Midtown YWCA. The next time I go there with my classmates from Southside Family School, I will be able to share with them some of the many new things I’ve learned.