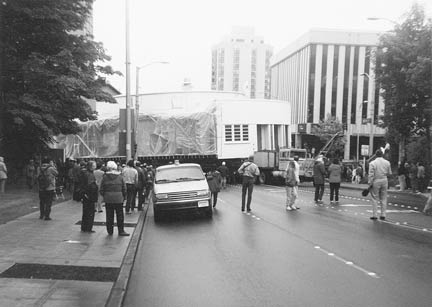 Above is an example of a much larger building in the process of moving 1 mile away in 1991. In order to move across the University of Washington (Seattle) campus via city streets in 1991 it was required to make some tight intersection turns as seen above. On the Historic Register, the Penthouse was the first Theatre in the Round (arena) built in the United States. This 160 seat theatre was completely renovated in 1991 when it was moved from its original south campus location. (Photo by Bruce Cochran)

Last October, Michael Lander, the developer of new apartments, condos, and townhouses along the Uptown Greenway, presented plans to demolish two houses at 24th and Colfax Avenue South in the Wedge and erect a four-story apartment building on the site. Since then, the project has encountered resistance from some Wedge residents and from the Healy Project, a group dedicated to preserving the architectural legacy of Minneapolis master builder T. P. Healy. The center of contention is the Orth House, 2320 Colfax, designed and built by Healy in 1893.

In January, Anders Christensen, researcher for the Healy Project, sent a letter to the City disputing the Planning Director’s determination that the house at 2320 Colfax is not an historic resource. Minneapolis statutes mandate an appeal process, so on March 15, after the developer filed an application for demolition permits for the houses at 2316 and 2320, Christensen filed an appeal with the City regarding 2320. The Heritage Preservation Commission (HPC) will hear the appeal on Tuesday, April 16. Until the hearing and determination by the H.P.C., the City review process on the Lander proposal will be suspended. On March 19, a demolition permit was issued for 2316.

On March 5, project architect Pete Keely presented the project to the City’s Planning and Zoning Commission. However, because the developer is now requesting four zoning variances that were not previously proposed, Keely will have to return to the LHENA Zoning and Planning Committee to request its approval. Previously, motions before the LHENA Z&P Committee and the LHENA Board to approve the Lander project resulted in tie votes and the motions did not pass.

Minneapolis architect John Cuningham, Healy’s great-grandson, toured the house with an eye to redeveloping the existing structure. (Cuningham’s firm, the Cuningham Group designed the Uptown Small Area Plan.) In addition, the Healy Project has found a potential financial backer for such an adaptive reuse project.

Meanwhile, preservationists have begun making contingency plans should the demolition permit eventually be issued for the Orth House. Nicole Curtis of the “Rehab Addict” show on the HGTV cable channel is looking into the possibility of moving the house to a lot further east on Franklin. She and Minneapolis house mover John Jepsen of Jepsen, Inc. have examined the house and determined that such a move would be feasible. Jepsen says that because it’s made of wood, the 6,400 square-foot house is relatively “light.” The most difficult part of the move would be probably be getting the house up and down the grade at Franklin and Lyndale Avenues.

Trilby Busch is affiliated with the Healy Project, a group dedicated to preserving the architectural legacy of Minneapolis master builder T. P. Healy. (which is currently working on incorporating as a nonprofit.) She wrote the initial 1983 article on Healy, “Legacy of a Master Builder” for Twin Cities magazine. She’s retired from teaching college English, has lived in the same 1885 Wedge house since 1976, and was Wedge editor in the ‘80s.