Crews are conducting routine work on the Stone Arch Bridge this week. It’s one of only three National Historic Civil Engineering Landmarks in Minnesota. (Photo by Eric Tanaka)

The city of Minneapolis began some general maintenance on the Stone Arch Bridge this week in order to help preserve the long-standing structure.

The Stone Arch Bridge, built in 1883, is a Minneapolis landmark that has withstood the test of time.

“It’s an iconic visual,” said Laura Salveson, director of the Mill City Museum, which maintains some of the history of the riverfront area.

One of the oldest bridges to stretch across the Mississippi River, the Stone Arch Bridge is located just past the only significant waterfall on the Mississippi, Saint Anthony Falls.

The bridge was built by James J. Hill for just $650,000. His railway, which would later become the Great Northern Railway, needed access to the Union Depot.

Since Hill decided to build the bridge below the falls, he needed a sharp angle on the west side of the bridge to make it into downtown.

Some engineers thought a stone arch bridge couldn’t be built on a curve, but for years, a curve served as the final stretch into Minneapolis for many train passengers.

“The only way that James Hill could get his new railroad into downtown was crossing the river at that angle,” said local bridge historian John Weeks.

That angle has since become a scenic and well-known spot. Many broadcasts and photos of Minneapolis have been taken from that view from the bridge.

“I think that’s appropriate because that was, for many decades, the way that people coming into Minneapolis for the first time would experience the city,” said David Stevens, public program coordinator at the Mill City Museum.

“The engineering was just really sound,” said Steve Olson, a civil engineering alumnus from the University of Minnesota and president of Olson and Nesvold Engineers, which offers bridge rehabilitation services.

“Good details have helped it survive.”

From the time of its creation in 1883 until 1978, the Stone Arch Bridge supported thousands of passenger trains. 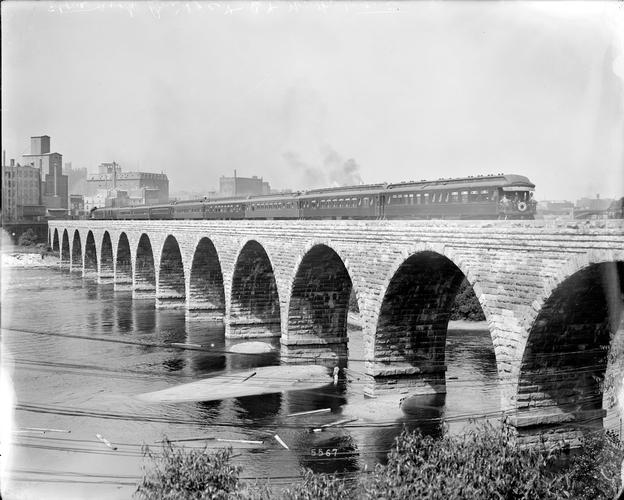 A passenger train crosses the Stone Arch Bridge in 1915. It served as a working railroad bridge until 1978 and became a pedestrian and bike trail in 1994. (Courtesy of the Minnesota Historical Society)

The bridge did undergo major renovations in the 1960s. A devastating flood struck Minneapolis in 1965, and two piers on the east end of the bridge were destabilized. The bridge began to sag and had to be repaired.

Also, after the Upper Saint Anthony Lock was completed, the bridge had to be modified to allow for upstream navigation. In the 1960s, engineers removed a pier and two of the arches and replaced them with a steel truss, bringing the number of arches down from 23 to 21.

Then, in 1994, the bridge went through an extensive renovating process to turn it into a pedestrian and bicycle bridge.

Today, it is one of the most historic locations in Minneapolis.

The city will be doing its spring maintenance to keep the bridge in good condition.

According to the Minneapolis Park and Recreation Board, the maintenance will include washing the bridge, sealing any cracks and tuck-pointing the stone masonry.

The bridge will continue to be available for use during the maintenance.