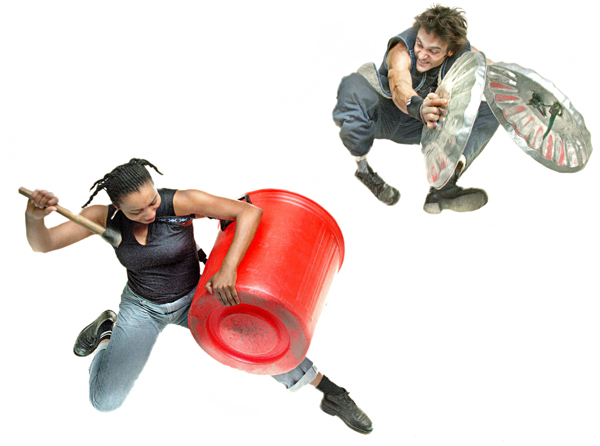 As an artistic endeavor, I respect the purity of Stomp—the percussive entertainment now playing, in a touring production, at the Ordway Center for the Performing Arts. For about 90 minutes, several performers entertain a large audience without words or any recorded soundtrack. The entire show consists of music, but it’s all percussion: banging, slapping, flicking, shaking, and, yes, stomping. This is the kind of thing attempted as an avant-garde endeavor by composers like Steve Reich, but selling an evening of pure percussion to the ticket-buying masses is quite a feat.

20 years after its intial inception, Stomp is most definitely a feat accompli. What began as a Fringe production in London is now a global brand with multiple touring productions, movies, and appearances everywhere from Coke commercials to the Oscars. The show works. The audience I saw it with on Tuesday night seemed to love it. My attention, though, drifted—and by “drifted,” I mean “in my head, I wrote this entire review as well as two blog entries on unrelated subjects.”

Stomp creators Luke Cresswell and Steve McNicholas are incredibly inventive in finding diverse ways to make percussive sounds. The cast of this production bang on cans, rustle newspapers, clap their hands, slap tubes on the ground, and bounce basketballs. They smack inner tubes, they thump on tubs, they whack sinks with spoons. That makes the show sound thrilling, but remember that this is spaced out over an hour and a half: the sinks get several minutes, the basketballs get several minutes, the inner tubes get several minutes. By the 45-minute mark, I kinda got it.

To keep the audience engaged, the performers engage in what the program calls “visual comedy.” Mimed humor can be outrageously entertaining—as was recently seen at the Southern Theater’s Brouhaha Comedy Festival—but the schtick here has a sameness that tends to wear thin. John has a broom, Jaclynn has a broom, Michael has a broom, and—whoops! No broom for Carlos! Ha ha. Ha. Ha. Haaaaaaaaaaaa.

In his program note, the Ordway’s producing artistic director James Rocco calls Stomp a “one-of-a-kind entertainment performance. There’s simply nothing else like it.” That is certainly true, and I’m glad I went. I saw several talented, tightly rehearsed, athletic, charismatic performers make a tremendous racket, and—in my head, at least—I even got some work taken care of while they were doing it.