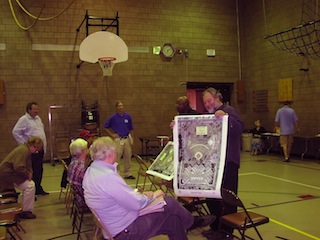 Plans are moving fast at Stewart Park to install a 60 X 40 yard soccer field for youth games.  Minneapolis Parks and Recreation has received $225,000 in funding from the Hennepin County Youth Sports Grant for the project, according an invitation for a community meeting held last week.

Discussion and criticism was discouraged at the meeting on June 10, but some neighbors voiced their concerns anyway.  Among the criticisms include questioning why the field must be fenced off, which would prevent usage when the park is closed, why trees must be cut down (in particular a 40 inch in diameter Linden Tree which is said to be the oldest in the city.


Parks and Recreation District Manager Obie Kipper said that the planners were on a tight time frame, so there wasn’t much time for discussion about the new field’s design.  “We’ve made our decision about the size, and about where it’s going to go,” Kipper said.  He said the parks needed to move forward with the project in order to utilize the grant money.  “If we don’t get this done, if we procrastinate, they’ll give [the money] to another field.”

However, some people at the meeting voiced concern about the location of the field, which since it is at the far end of the park from the nearby Anderson Elementary School, would be too far to walk for the school’s physical education classes (timing being an issue).

Others at the meeting were concerned about the trees that would be cut down.  “People love to sit under the trees and watch the game,” said one attendant of the meeting.   The trees presented a safety concern, according to Kipper, and would be problematic in the maintenance of the field’s new artificial turf.  A recent posting on the Minneapolis Issues Forum also shows concern that the oldest linden tree in the city would be cut down to make room for the new field.

The fence around the field, which would be built for safety purposes, would mean limited access to the field when the park is closed.  Some neighbors were  worried this would prevent usage by neighbors wanting to use the park on a non-scheduled basis for pick-up games of ultimate Frisbee and other activities.

The field’s use would be primarily for park-run youth soccer leagues, which would get priority in scheduling. Rosi Cruz, who is with East Midtown Phillips Youth (EMPY) said that the park-run league doesn’t work for many immigrant youth because it requires kids to play games at parks around the city. Lack of transportation was a reason that Cruz founded EMPY, an indoor soccer league that remains at the same location.  “We were the ones that started all this, and they never thanked us,” Cruz said, referring to the 500 postcards sent to Park Commissioner Scott Vreeland pleading for more soccer fields.