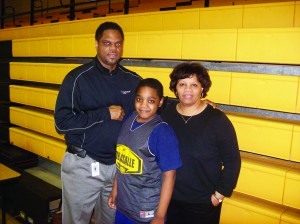 This is the second consecutive month this year that she has been honored: Johnson-Patterson also reached the 400-win milestone on January 11. “Four hundred wins in 17½ years — it’s almost 25 wins a season,” she says of that achievement. “I knew it was coming up, but when they announced it…that’s absolutely unbelievable.

“I never dreamt that I would have this much success. All I really wanted to do is help kids get scholarships and develop skills, help them develop confidence [and] be better people. You have to learn how to win to be successful,” she points out.

Her record is 404-95, and counting. But this significant milestone went virtually unnoticed, getting instead the Rodney Dangerfield “no respect” treatment from the mainstream yakkety-yaks and snobbish scribes.

I’d suspect that if Johnson-Patterson was another skin color, or perhaps a different gender, she would have been the subject of half-hour specials. Or, if she had got most if not all of her wins not at a school located in the Black community, but in a Twin Cities suburban school with ballyhooed facilities and supposedly better kids, the coach would’ve have made all the local talk shows.

“You’re absolutely correct,” confirms Johnson-Patterson of this suspected neglect. “I never received a single phone call or anything. What I see happening is that people want to bury my accomplishments. They don’t want to acknowledge the fact that I’ve been extremely successful.

“The stereotypes always have been there,” says Johnson-Patterson of her 14 years at Minneapolis North before being hired at her present school several years ago. “I don’t know if it is a race issue, but I definitely know it’s a gender issue. It’s probably a combination.”

Sadly, this is another clear-cut example of the cultural conditioning we all know so well: White people are considered superior and Blacks inferior, and as a result we are underestimated, underutilized and marginized.

“There’s a lot of stereotypes that come into play,” notes the DeLaSalle coach, who adds that if she had been a White male, TV cameras would have converged en masse on the downtown Minneapolis school. “I don’t think people really want to believe that I could be considered one of the best [high school] coaches in the state…

“I had all this talent, [so the assumption is] ‘She should win.’ No one ever looks at it that you can have talent, but if you don’t put it all together… Other teams have had a lot of talent, but they can’t put it together. They haven’t won so many state championships or been at the state tournament 13 times, including nine straight times in a row.”

Nor has anyone else been the first Minnesota girls’ basketball coach to reach the finals with five eighth-graders, four of them as starters in 2009. Faith Johnson-Patterson has.

“What people don’t understand is that every year traditionally my teams have gotten better. We started out rough this year and continually [worked to] improve,” she says. “But has anybody noticed that? Sometimes I used to make the statement, ‘Do I do my job so well that I make it look easy?’

“I’m here for these kids,” reaffirms Johnson-Patterson, who has seen many of her players go on to college and then on to productive lives. “The program has produced over $2 million in scholarships, and I’m extremely proud that they took advantage of the opportunity…young women giving back to other women.

“I’m a coach, and I have been in for the right reasons all along. I’ve worked hard. I feel that God has called me to reach out and give back to the lives of young people. I take it extremely seriously — it’s always been about them and not about me.”