The growth of faculty and administrative employees of the University of Minnesota has increased steadily over the past 10 years, but overall growth shows some positions filling up more than others.

Administrative jobs have increased by 75 percent across the University system since 1999, according to data kept by the University’s Office of Institutional Research.

While the number of faculty employed with or seeking tenure has also increased, the rate is much less dramatic. Fourteen percent more professors are teaching and doing research now compared to 10 years ago.

The University’s headcount follows a national pattern identified in a 2007-08 study by the American Association of University Professors. According to the AAUP, between 1976 and 2005, the number of administrators, which the researchers narrowed to mean top leadership positions, has grown 101 percent. 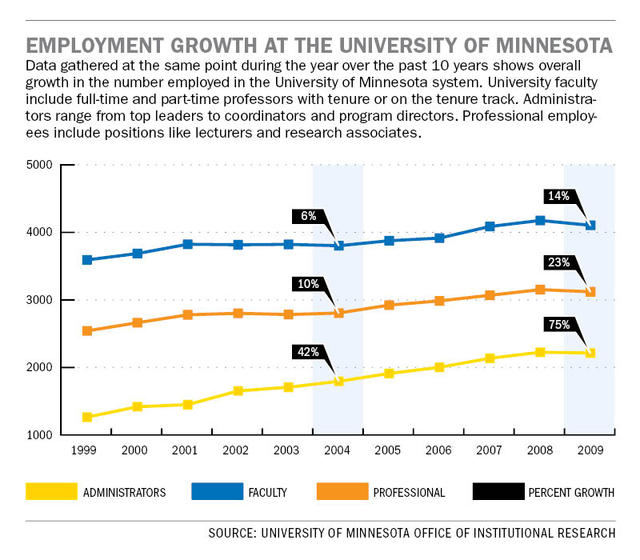 John Curtis, director of research and public policy at AAUP, said higher education institutions seem to be hiring more part-time and non tenure-track faculty to save on paychecks.

Despite the dramatic increase of non-tenure-track positions seen by the AAUP, the University shows a 23 percent increase in those positions since 1999.

Joe Kelly, chief of staff in the University’s Office of Human Resources, said he was surprised by the sharp increase in administrative personnel, but said the University’s newer emphasis on compliance and accountability could account for the changes.

The University’s growing focus on research also required the hiring of administrative positions to handle supportive tasks like processing grants, he said.

“Our campus is like a small city,” Kelly said. “It’s not just like you build a classroom and put a person in front to teach. There’s a lot more that goes on behind the scenes of producing the education.”

Ultimately, it comes down to providing a better experience for students, Kelly said. Instead of a faculty member also acting as a student adviser, students interact with administrators whose job is to provide them with the best information possible.

“It’s an effort to provide better support and service for the student, help guide them through their career so they can graduate,” he said.

Graduation rates at the University have been increasing each year but remain low in comparison to its peers. In 2007, the four-year graduation rate was recorded at 45 percent, up from 41 percent the previous year. The University of Michigan graduated 72 percent of students in four years in 2008.

Professor Morris Kleiner of the Humphrey Institute of Public Affairs said the University’s support staff is helpful, but he thinks it is unclear if they are more helpful now than they were when he first started teaching 23 years ago.

He said his role and responsibilities haven’t changed much since 1987.

“Having more and better faculty would have enhanced the reputation of the University more,” said Kliener, a faculty representative on the faculty affairs committee of the University Senate. He raised questions about administration rates earlier this year.

In a study comparing spending in 2003 and 2008, the Office of Institutional Research found that the University mostly maintained the amount it spent on employee compensation despite the drastic differences in growth rates.

“Ideally, you want to put the resources closest to those with their boots on the ground,” Kleiner said.

Financially speaking, that’s what the University does.

Administrators received 14 percent of the total amount spent on pay in 2008, up 1 percentage point from 2003. Employees whose primary responsibilities include instruction and research received 45 percent both years.