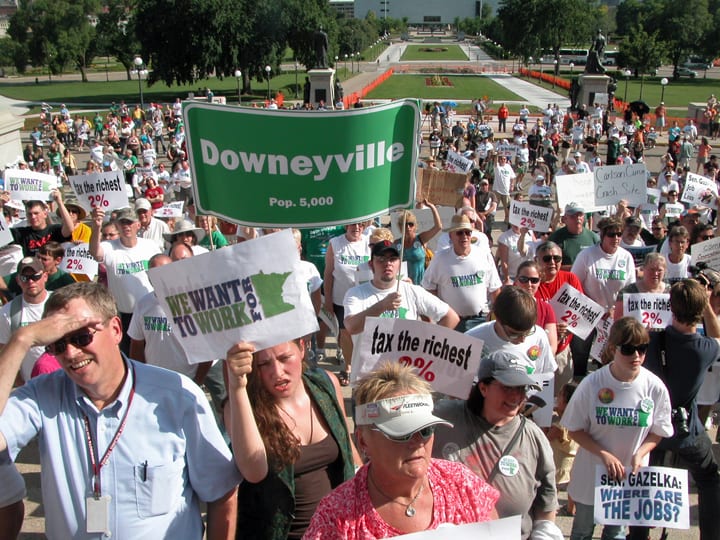 What do you call a community that lays off 20,000 state workers to protect a handful of millionaires from paying higher taxes?

That was the rallying cry put forth by hundreds of state workers rallying on the state Capitol steps yesterday. They pinned blame for Minnesota’s state government shutdown on conservative Republican legislators like Rep. Keith Downey of Edina, who has advocated permanently eliminating 5,000 state employees’ jobs and stripping all public workers of their collective bargaining rights.

Downey “has called us beasts that have to be starved,” AFSCME Council 5 Executive Director Eliot Seide told members of his union and the Minnesota Association of Professional Employees, which together represent 31,000 state employees in Minnesota.

Workers at the rally, frustrated by a work stoppage poised to enter its second week, didn’t shy away from calling out their elected officials, many of whom will continue to collect paychecks during the shutdown.

“Do you see any beasts here?” Mike Lindholt, a state highway maintenance worker, asked the crowd. “The only beasts we see are in (the Capitol).

Downey wasn’t the only lawmaker taken to task, however, as public employees took turns at the podium defending the work they do and the services they deliver – services, they said, not available to residents of Downeyville.

Rep. Steve Drazkowski of Mazeppa was honored with a “Drazkowski Drive” in Downeyville, for his suggestion on the House floor that state workers charged with caring for elderly and disabled Minnesotans be replaced with electronic baby monitors.

“My hands have performed CPR and the Heimlich maneuver,” said Willie Snyder, a state worker who cares for the developmentally disabled. “What baby monitor is going to be responsible for the work I do?”

Sen. Michelle Fishbach of Paynesville was given a “Fishbach Boulevard” for her efforts to cut back state support for higher education – cuts that have the University of Minnesota and MnSCU systems planning tuition increases of around 4 percent.

“These cuts will make it harder and harder for middle class and low-income people to get the education they need,” said Mary Falk, an AFSCME member who works at Anoka Technical College.

And Downeyville, as Transit for Livable Communities Executive Director Barb Thoman pointed out, is certainly not accessible by bus. The Republican budget slashes the state’s allocation to Metro Transit by a whopping 85 percent, an amount sure to cause significant fare hikes and service reductions.

“Do you like seeing those buses go by?” Thoman asked. “You’re not going to see many of them with these cuts.”

Public workers aren’t the only ones feeling the pinch of the government shutdown, however.

Jason Moran, a MAPE member who works as an emergency-response manager for the Pollution Control Agency, said businesses seeking environmental permits for new construction can’t get them because the agency is closed.

The shutdown also has idled private-sector workers employed by contractors that repair and build the state’s roads and bridges.

Harry Melander, president of the Minnesota Building and Construction Trades Council, estimated 10,000 union construction workers are losing work as a result of the shutdown. That’s especially tough, given that road-construction work is seasonal, and workers rely on wages from the summer months to get them through the winter.

“We are individuals who work hard, and we are no longer being given the opportunity to work,” Melander said. “We need to get everyone back to the table to put (public employees) back to work and put our members back to work. We want to work for Minnesota.”

That’s not going to happen, of course, until lawmakers and the governor reach an agreement on the biennial budget for 2012-13.

State workers at the Downeyville rally formed a united front behind DFL Gov. Mark Dayton’s insistence that increased taxes on the wealthiest Minnesotans be a part of that solution.

“Our representatives need to stop catering to the richest 2 percent and support fair taxes,” said Phyllis Walker, a clerical worker at the University of Minnesota and president of AFSCME Local 3800. “Hard-working, dedicated public workers did not create this so-called economic crisis, and we’re sure not going to pay for it.”