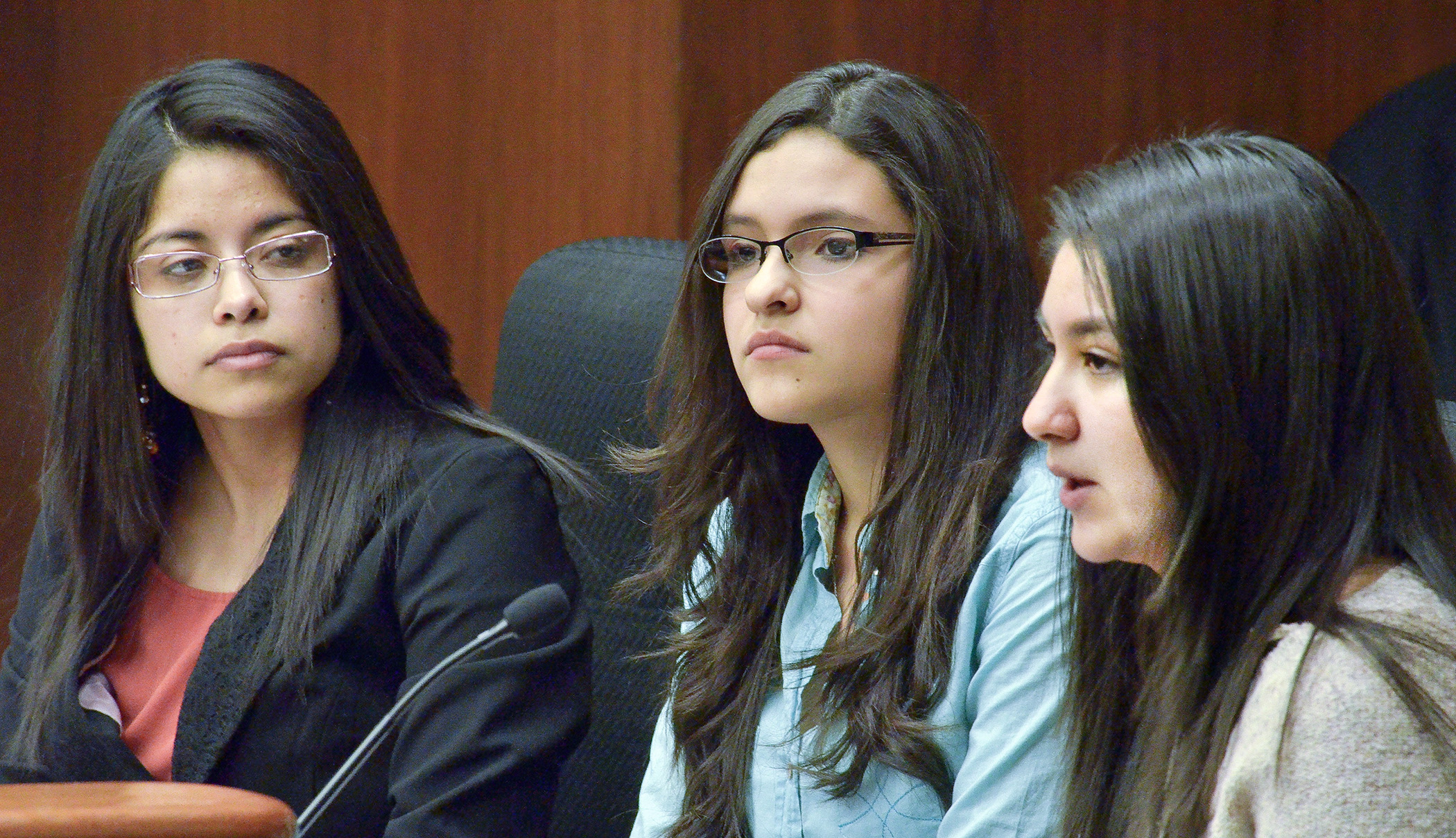 Karem Salas, from left, Thalia Estrada and Joycelin Hernandez testify before the House Higher Education Finance and Policy Committee April 3 in support of a bill that would provide unlawful immigrants treatment with respect to financial aid and tuition at public postsecondary institutions. (Photo by Andrew VonBank)

Thalia Estrada was five years old when she left her native Peru. Fearful that terrorism in Lima could kill them, her parents arranged for Thalia and her brother to fly to the United States. Thalia started school within a few days. She learned a new language, got used to a new culture. Over time, Minnesota became home.

But Thalia didn’t immigrate legally, and as she nears graduation from high school, her worries about the future are mounting. Despite a 3.5 GPA at St. Paul Central High School and several college acceptance letters, “I still face the fear of how I’m going to pay my tuition,” the 17-year-old told members of the House Higher Education Finance and Policy Committee Wednesday. Though she said she has deferred action status as an immigrant, which temporarily shields her from deportation, she’s not eligible for in-state tuition rates and many kinds of financial aid.

A bill heard by the committee would help students like Thalia. The proposed Minnesota Dream Act would change the standards for determining whether a student can pay a resident tuition rate and receive certain grants and scholarships for public colleges and universities in Minnesota. HF875, the latest incarnation of a legislative proposal that supporters have pushed for years, would extend resident tuition rates to students without lawful immigration status, if they met certain conditions.

Students benefitting from the bill would have to have attended high school in Minnesota for three years, graduated, and filed an affidavit with their college saying that they either have applied to legalize their status or will do so as soon as they are eligible.

“We are a people in Minnesota who believe in the power of education,” said Rep. Carlos Mariani (DFL-St. Paul), the bill’s sponsor, arguing that the Dream Act would help the whole state as well as young immigrants.

Not everyone is convinced. “I have empathy for the students who have been here lobbying for this change, but I’m still somewhat troubled with the concept of doing this for undocumented residents,” said Rep. Bud Nornes (R-Fergus Falls), the committee’s minority leader, said after the hearing.

HF875 would benefit an estimated 750 postsecondary students in any given year, according to a fiscal note prepared for the bill.

The committee heard testimony from several students and other supporters of the bill on Wednesday, but took no action, laying the bill over for future consideration.

The bill has a Senate companion sponsored by Sen. Sandy Pappas (DFL-St. Paul). SF723 has been referred to the Senate Finance Committee.