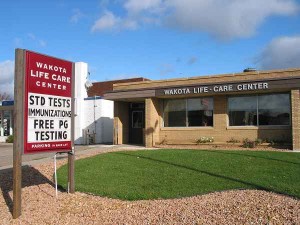 The state of Minnesota is paying for programs that encourage women who are pregnant or think they may be pregnant to forgo abortion. But according to experts, some of these taxpayer-funded programs are intentionally misleading women in crisis by providing inaccurate information about reproductive health options. And a large amount of money in the program goes to overtly religious organizations, some that include Bible study among their grant-funded activities.

The Positive Alternatives Act was passed in 2005, due to pressure from the lobbying group Minnesota Citizens Concerned for Life, and provides $2.5 million per year in funding for “abortion alternatives” programs, the majority of which goes to crisis pregnancy centers or CPCs. Minnesota is one of only 10 states that provide such funding.

A Minnesota Independent survey of information provided by CPCs demonstrates that the taxpayer is often footing the bill for information that contradicts mainstream scientific and public health experts.

One such CPC is the St. Croix Valley Life Care Center (SCVLCC) in Stillwater, which receives $295,751 each year in direct grants from the state.

SCVLCC says on its website that it does not dispense birth control pills because they damage the body and cause abortions:

The pill and other forms of hormonal contraception can cause unhealthy side effects ranging from mild to serious… It could also be causing damage to your fertility in ways that may affect your ability to get pregnant later, should you want to. It also has abortifacient properties.

The site’s mention of emergency contraception carries a similar warning:

The morning after pill is several times the dose of one birth control pill. This can do serious damage to your fertility or, at the very least, leave you feeling ill. It can increase your risk of an ectopic pregnancy should you become pregnant after taking the morning after pill. It also has abortifacient properties and if implantation has already occurred it could cause an early abortion.

SCLCC then describes the process by which birth-control medications work and concludes with this warning: “This process is known as a chemical abortion and is why the Pill is referred to as an abortifacient.”

But nearly every major medical association has said just the opposite. According to the American Academy of Pediatrics guide for practitioners [pdf], “Emergency contraception does not interrupt a pregnancy that has already implanted in the uterine lining.” In fact, the organization acknowledges the high amount of misinformation floating around and suggests to clinicians that “education on the mechanism of emergency contraception often helps to answer questions or concerns of individual patients.”

The American Congress of Obstetricians and Gynecologists also confirms that emergency contraception does not cause abortion and is, in fact, the same medication used for couples trying to conceive artificially:

Emergency contraception will not disrupt an established pregnancy. Women often are exposed to exogenous hormones in early pregnancy without adverse outcome. Some women undergoing assisted reproductive technology procedures to achieve pregnancy are routinely prescribed progesterone to support the pregnancy.

The American College of Physicians says [pdf] that pharmacies and other entities that don’t carry the morning-after pill for ideological reasons are defeating that purpose: “Ironically, this policy may indirectly increase the number of unintended pregnancies and induced abortions.”

These groups are doing more harm than good, says Linnea House of NARAL Minnesota. “I do have a lot of concerns,” she said. “These are organizations that are providing misinformation, especially to women who are in crisis.”

And St. Croix Valley Life Care Center is not the only state-funded agency that disseminates questionable claims about birth control.

Health Resources Life Care Center in Fergus Falls receives $149,998 annually and similarly offers information on its website that states that “an abortion will occur” if a patient takes emergency contraception. As does the Highland LifeCare Center in St. Paul: “This causes an already fertilized egg to be expelled from the womb, causing an early abortion.”

The Northside Life Care Center in Minneapolis, which receives $124,980 in state funds annually, says it doesn’t provide birth control. “No. Artificial methods of birth control have many risks and side effects. Many of them also cause early abortions. We recommend natural family planning for those who are married and chastity for those who are not married.”

In order for programs to receive Positive Alternatives money, they have to have been founded before 2005, and most were set up by anti-abortion or religious groups in the 1980s and 1990s. They have come under fierce criticism from pro-choice activists who say CPCs misrepresent themselves as health clinics and provide false information about abortion and contraception. Some communities have begun passing laws requiring CPCs to provide full disclosure about the nature of the information they provide.

House says NARAL Minnesota has been watching these organizations closely. And her group is not alone.

The Baltimore City Council passed an ordinance regulating CPCs that went into effect Jan. 1. The law says that CPCs must inform all clients that they do not provide medically accurate reproductive health information. “It’s a step towards making sure that women have the information they need to make the right decision for their health and their future,” Council President Stephanie Rawlings-Blake said when the bill passed.

House said that other communities are contemplating similar measures.

The rejection of birth control at the CPCs means that even condoms are targeted.

Helping Hand Pregnancy Center, Inc., in Worthington receives $150,000 annually from the Minnesota Department of Health and says abstinence is the only option.

“Abstaining from sexual activity is the only 100% guarantee you have to avoid pregnancy and to avoid contracting an STI,” the center’s website says . “If you feel that you are not ready to have sex, or if you do not want to put yourself at risk for pregnancy or an STI, then abstinence is your best choice.”

The website claims that “[c]onsistent condom use 100% of the time during vaginal sex reduces your risk for HIV by 85%.”

Helping Hand doesn’t offer a source for that information, but numerous studies have shown condoms to be highly effective at preventing HIV infection. According to the World Health Organization:

The most convincing data on the effectiveness of condoms in preventing HIV infection has been generated by prospective studies undertaken on serodiscordant couples, when one partner is infected with HIV and the other is not. These studies show that, with consistent condom use, the HIV infection rate among uninfected partners was less than 1 percent per year.

Birthline, which is based in St. Cloud and receives $147,730 per year, says that abortion can increase the risk of breast cancer.

Carrying a pregnancy to full term gives protection against breast cancer that cannot be gained if abortion is chosen. Abortion causes a sudden drop in estrogen levels that may make breast cells more susceptible to cancer. Most studies conducted so far show a significant linkage between abortion and breast cancer.

In fact, research shows the opposite of Birthline’s claims. “Breast cancer risk is increased for a short time after a full-term pregnancy,” according to the American Cancer Society.

Separation of church and state

Many of the programs funded by the Minnesota Department of Health are religious in nature, some overtly so.

One, Elizabeth House in Worthington, which receives $149,625, says its mission is to “assist families to overcome the obstacles in their lives through the power of the Lord Jesus Christ.”

The North Region Pregnancy Care Center in Roseau gets $56,595 per year. It describes itself as a “Christian, pro-life ministry proclaiming the Gospel of Jesus Christ by providing a network of care to those experiencing pregnancy related issues and by compassionately presenting Biblical truth resulting in changed lives to the glory of God.”

The Highland LifeCare Center in St. Paul “believes that each person is made in the image and likeness of God. We encourage and demonstrate respect for human life by promoting sexual purity and by serving those facing the challenges of unplanned pregnancies, before and after their children’s births.”

St. Cloud’s Birthline is a “Christian organization dedicated to serving any person with an unexpected or challenging pregnancy by providing physical, emotional and spiritual assistance as well as programs and referrals reflecting the inherent dignity of all human life.”

With massive budget deficits in recent years, Minnesota legislators have targeted such funding in order to help fix the budget gap. In 2007 and 2008, attempts were made to cut the Positive Alternatives program, but ultimately Gov. Tim Pawlenty – who has championed the program – and anti-abortion legislators prevailed.

House says that government should fund medically accurate programs and mentioned that several Positive Alternatives programs, such as Face to Face Health and Counseling Service in St. Paul, give women accurate health information about birth control and contraception.

“We expect hospitals or transportation projects using state funds to do their work accurately, taxpayers should expect the same from health programs,” she said.

“In tough economic times, we should make sure that state funding is going to programs that provide accurate health information, not one that has an ideological bent.”