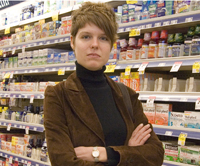 Erin Matson was seven years old when she organized her first protest. The site was her family’s Edina living room, and the issue was whether or not to declaw the cat. Matson was against it.

“I lobbied hard,” she laughed. “I know I marched and chanted for quite some time.”

Her campaign was successful, she said. “The couches in my parents’ house bear witness to my victory, though the cat passed away some time ago.”

Matson’s penchant for political advocacy hasn’t dissipated. Two years ago, at age 23, she became president of the Minnesota chapter of the National Organization of Women—the youngest woman ever to head a state chapter. She’s also a member of NOW’s Young Feminist Task Force. Her work with NOW is volunteer: she works a full-time job to pay the bills.

This year Matson made headlines with an inspired campaign to publicize the threat to women’s access to birth control: her handling of the incendiary issue of pharmacist refusal brought one corporate compromise and now she has set her sights on a permanent legal solution.

Only one year ago, in November 2004, Matson and MN NOW’s board decided to take on the issue of pharmacists refusing to dispense birth control. At that time, word had just started to spread: a few women had written emails about trying to fill a birth control prescription and being denied; a few news outlets had reported on a handful of incidents. Matson focused her organization’s energies first on CVS, which is expanding its presence in Minnesota, and then on Walgreens, one of the biggest chains in the area. Both companies had pharmacist refusal clauses in their corporate policies. In July, under threat of a NOW rally at the Uptown Walgreens, directors there talked with Matson for hours on the phone and hammered out a compromise. Walgreens promised, in writing, that women who encountered a pharmacist who refused to fill their prescriptions would not have to drive to another store to get it filled: if another pharmacist was unavailable at that store, someone from a nearby Walgreens would deliver it to the customer at the original store.

Matson called the agreement a partial victory. “We want them to change the policy so that each pharmacist has to fill each prescription right away,” she said.

Next, Matson focused on Target: NOW has rallied on Fridays during the Holidazzle parade in front of the downtown store to protest Target’s policy of allowing pharmacists to refuse to fill prescriptions for Plan B. So far, Target hasn’t budged, and Matson says that illustrates the problem with fighting this fight store by store and CEO by CEO.

“It needs to be the law,” she said. “That is what we need now. You can pressure corporations all you want, but it’s really at the whim of a corporation.”

This session, however, MN NOW may have to play defense: state Rep. Mary Ellen Otremba, DFL-Long Prairie, is expected to propose legislation that would prevent the state pharmacy board from penalizing pharmacists who refuse to fill prescriptions for contraception. Public opinion is overwhelmingly against such a law, said Matson.

“When I debated Mary Ellen Otremba on the radio in the fall, we had 20-30 minutes for callers. It was WCCO radio, not exactly a radical station, and every single person from all over the state, man, woman, old, young, was incensed by what she was saying. There was a lot of anger at what she was saying,” she said.

“I think this is more than a partisan issue,” Matson added. “Ninety percent of women use some form of contraception between the ages of 15 and 44. This is basic medical care that touches everyone.”

As fierce an activist as Matson is, she wouldn’t mind having fewer fires to put out. “I wish the ERA would’ve passed,” she said. “I think that would’ve solved a lot of the things I’m working on right now.”