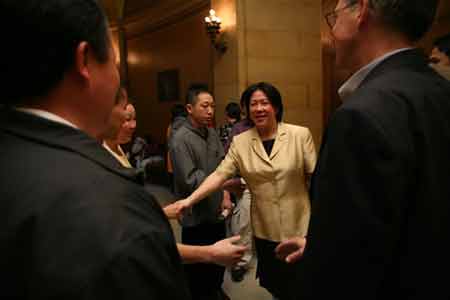 When she first saw the video of Hmong graves in Thailand being dug up, State Sen. Mee Moua told an overflowing crowd at the state capitol rotunda that she felt so violated she “couldn’t sleep for days.” Compelled to seek justice, Sen. Moua vowed to use the power she had to bring these human rights violations to the light of the international community.

Flanked by a number of fellow state legislators, Sen. Moua victoriously pumped her fist in the air clutching resolutions that were unanimously passed by both the House and the Senate urging the state’s congressional delegation to work with the Thai government to stop the grave desecrations, investigate the whereabouts of the remains that have been disinterred, and to return those remains to family members.

Similar resolutions had been passed by the cities of St. Paul and Minneapolis. Taking it one step further, St. Paul Mayor Chris Coleman raised the issue with U.N. Secretary-General Kofi Annan when they met during Annan’s visit to St. Paul over the weekend of April 22.

Encouraged by the results at the state level, University of Minnesota Human Rights Program director Barbara Frey told the crowd assembled at the capitol that she will continue to use the resources available to find international answers despite the lack of response from the Thai government and from the State Department thus far.

It was the U of M Human Rights Program that spearheaded a previous campaign in March to gather 158 statements from Hmong families affected by the grave diggings to officially file a complaint to the United Nations.

Including personal interviews, the students were able to gather photographs, certificates and receipts of payment for grave sites from some of the families, disputing the claim by Thai officials that the Hmong had no prior authorization to bury their deceased on the land where they were eventually dug up from.

According to estimates, more than 900 graves were exhumed by the Chinese foundation Bhoti Pavana under the direction of the monks at the Wat Tham Krabok before international pressure perhaps forced them to cease their operations at the Wat where more than an estimated 1,000 graves still remain.

The monks have acknowledged that the graves needed to be exhumed to clear space for development and have claimed that the bones were treated with care and would be cremated according to Buddhist traditions. However, video evidence shows many graves were dug with very little concern for decency. In some instances, heads were coarsely chopped off and thrown in boiling water while the perpetrators laughed and joked in the background.

Starting with a letter written by U.S. Congressman Mark Kennedy on December 13 addressed to Richard Greene, acting assistant secretary of Population Refugees and Migration at the United States Department of State, the pressure began to be felt by the Thais as they realized the world was watching their actions.

Following that letter, a correspondence signed by Minnesota senators Mark Dayton and Norm Coleman and Wisconsin senators Herb Kohl and Russ Feingold as well as Minnesota representatives Martin Sabo and Betty McCollum and Wisconsin representatives Ron Kind and Mark Green, urging Secretary of State Condoleezza Rice to “press Thai officials to take immediate action to ensure that the graves are being handled with proper respect for Hmong funeral rites and rituals” may have been the turning point as the grave diggings came to a sudden halt.

Responding a month later, Jeffrey Bergner, assistant secretary of legislative affairs from the Department of State, indicated that the Thais were acting in “accordance with local Thai customs” but that “our Embassy in Bangkok will contact additional Thai officials to ensure they also understand the Hmong concerns.”

Acknowledging that the Thai government may never fully compensate the Hmong for their losses, Sen. Moua did point out the importance passing the Resolutions in Minnesota.

“Psychologically and from a morale standpoint, this community has felt so abused and violated that to have something like this happen symbolically will release some of the anguish,” Sen. Moua said. “These people know that they’ll never get restitution, they’re never going to get their remains back. But if it’s marked somewhere that the world recognizes that this was a violation of human rights, they’ll be able to sleep.”