Lucinda Jesson says 104,000 more Minnesotans have signed on for food support this year compared to last — a “direct result of the recession” — and many of them are seeking the assistance for the first time in their lives.

So Jesson, state Human Services commissioner, wasn’t surprised at numbers out this week showing a huge rise in the rate of child poverty in Minnesota.

That startling increase – a rise of 56 percent between 2000 and 2009, according to the 2011 Kids Count Data Book — coupled with the federal government’s efforts to reduce national debt as mandated by the Budget Control Act of 2011 has her worried about the human toll of these developments, especially in coming years.

Here’s why, as she explained to MinnPost in an interview Thursday:

The new debt reduction law has two parts, with the first mandating limits or “caps” on so-called discretionary spending for the next 10 fiscal years and beginning with fiscal year 2012. Such discretionary programs include services, for instance, for chemical dependency problems, in mental health, refugee resettlement, child-care assistance and for the elderly, among many others.

Monetary reductions must add up to about $1 trillion stripped from among all federal programs in the next decade, with the effect “not very noticeable” in the first years because of less severe cuts until the economy recovers, Jesson says. Which programs will be cut and by how much is not yet available.

It’s the second phase of that debt reduction program, involving the so-called congressional “super committee,” made up of six Republicans and six Democrats, where you might say a storm flag goes up. That group must find an additional $1.5 trillion in reductions or revenues. 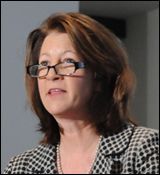 “All of our programs that are federally funded could be affected by this special committee,” she says. “They could propose cuts, they could also say, ‘Let’s raise revenues.”’ She’s hoping for the later action.

If the committee does not come to agreement on reductions or revenue by a certain date this fall, automatic reductions will be triggered across the board in, for instance, defense spending, Medicare, Temporary Assistance for Needy Families, child support, foster care and adoption assistance. Medicaid and food support programs are exempt.

So, what can be done?

“Here are some things we can do: follow this closely. If there’s the opportunity to weigh in with the super committee or special committee, I think that’s something we’ll consider,” Jesson says, as well as working with members of Minnesota’s Congressional delegation.