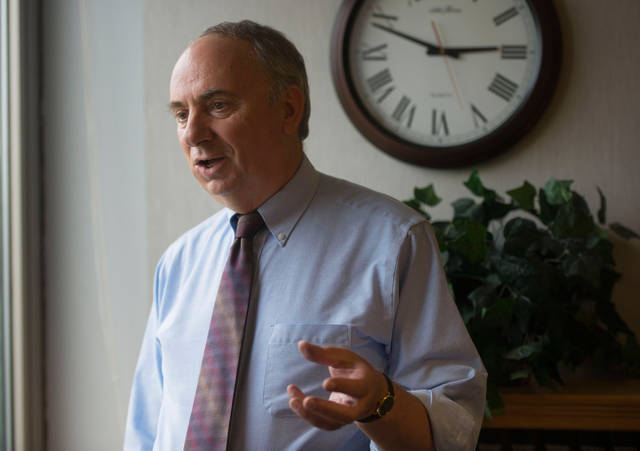 University of Minnesota Professor and former state economist Tom Stinson explains the process of filing state reports at his office in St. Paul on Thursday, June 6, 2013. Stinson recently retired after more than 25 years as the state's economist. (Photo by Alexander Breyfogle)

Tom Stinson has worked two jobs for the past 26 years.

As a University of Minnesota applied economics professor, he can write an article for a journal, but he said “it’s not clear that anybody ever reads it.”

As the state’s economist, the budget forecasts he makes are in the public eye right away.

After projecting the state’s budget since the 1980s under five governors and three recessions, Stinson is retiring from the role to focus on teaching and research.

Stinson came to the University in the 1980s as a researcher for a U.S. Department of Agriculture field office on the St. Paul campus. He was selected as state economist in 1987 after a regional search.

His main duty as state economist was to compile a state budget forecast to inform lawmakers as they create a two-year budget, a process he said “gets pretty hectic” when they’re due twice per year.

Despite the chaos, Kalambokidis said Stinson has a “calm presence.”

“There’s not a lot of harried running around the office,” she said. “He’s calm, he’s steady, he’s deliberate and he’s very generous with his knowledge and his experience.”

Despite the long hours he and his small team spend behind the scenes in their offices compiling the forecasts, Stinson said he doesn’t feel like his work goes overlooked.

“If you have to stand up and tell people ‘We have … less money than we thought’ in a press conference with eight or nine television cameras and 20 or 25 journalists standing there, I don’t feel like I’m overlooked at all,” he said.

Working with five governors was interesting, Stinson said, because each one had a different style and expected different things from him.

“It was my responsibility to figure out how to fit in that kind of environment and make sure that the governor got the best information,” he said.

One of the big issues the state faces economically is improving the quality of its workforce.

Because high school graduation rates have fallen statewide, Stinson said the quality of the state’s workforce is “under threat.”

He also said the size of the state’s budget reserve could become a problem in the future.

“Looking forward, our budget reserve really is too small compared to the size of the budget to provide protection” in economic turndowns, he said.

One thing Stinson said he’d like to focus on in his research is how the state’s tax system has become more volatile.

“The highs are higher and the lows are lower and the fall between them is steeper,” he said, adding that measuring tax volatility helps protect against economic shocks.

He said he’ll teach a graduate course on public expenditures in public sector economics in the fall with Kalambokidis. The courses he teaches after that will be up to his department.

Tracking the nation’s economy as state economist always helped in the classroom as Stinson juggled the two jobs.

“It made me a better teacher, I thought, because it was easy to bring in what was going on today and make the class a little bit more current,” Stinson said.

Humphrey School of Public Affairs senior fellow Jay Kiedrowski hired Stinson for the position of state economist in 1987, when Kiedrowski served as the state’s commissioner of finance.

“As I look back over my career, it’s one of the best selections I ever made,” he said.

Kiedrowski said Stinson has integrity — an important quality for the position that requires objectivity through different political administrations.

“He’d ponder what you were saying. He wasn’t quick to respond; he was more thorough than that,” Kiedrowski said. “He wouldn’t be afraid to disagree with you, but he was very polite about it.”

One of Stinson’s lasting impressions will be his professionalism, Kiedrowski said.

Kalambokidis, a longtime co-worker of Stinson who has a background in tax policy and state government, will take over the position in July.

She said it seemed like a good time to make the switch because she doesn’t have to deal with any major economic issues.

“It actually seemed like a pretty logical transition,” Kalambokidis said.

She’s looking forward to stretching “all sorts of intellectual muscles,” Kalambokidis said, to answer the wide range of economic questions she’ll be asked on the job.

“There’s a lot of challenges,” Stinson said, “but wheels aren’t coming off right now, and we’ll be able to do some development before the next crisis emerges.”