In last week’s issue of the MSR, we detailed the points made by the Minnesota’s Office of the Legislative Auditor’s (OLA) in their annual audit of the four “minority councils” in Minnesota (See MSR April 3-9, “Audit questions need for Council on Black Minnesotans”). The report released last month, which was critical of the councils’ effectiveness, also included criticism of the governor’s office and the legislature which the councils report to.

In response, Council on Black Minnesotans (COBM) Executive Director Edward McDonald said the report “appears to be nothing more than a veiled attempt to stymie the Council on Black Minnesotans’ civic engagement and the promotion of strong human rights enforcement in Minnesota.” The MSR subsequently spoke with State Auditor James Nobles at length about the four options the report offered to restructure the councils, which are:

Asked about the option which he personally most prefers, Noble (pictured) answered, “The reason there are four options is because we could not agree among ourselves. We thought it best to sort of put out there the strengths and weaknesses, the benefits and the drawbacks. 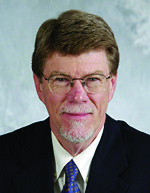 Also, “If you connect up with the governor and his agenda through the Commissioner of Human Rights, I think you’re going to get a little more power behind your message.”

The other option Nobles thinks “worth considering” is “connecting up with the individual departments on the specific issues that are of a concern to the communities that are represented by the councils, but also to the State of Minnesota.

“Issues in criminal justice need input at the Department of Corrections. The Commissioner of Health needs input from these communities about how to address health disparities. One approach would be to let those commissioners bring together people representing these communities in a very focused way, to ask, ‘What can we do to address these issues?’ Those are two options that I think are well worth considering.

“We laid out four options,” Nobles continued, “but what we asked is, ‘What option is not just maintaining the status quo?’ Because we think that the voices of these communities need to be amplified and heard more.”

Nobles’ colleague, Jo Vos, added, “Another reason why we laid out four options is the legislature has never really come forth and said, ‘Here’s the primary reason for having the councils.’ And if you want the councils to address, let’s say, disparities, then perhaps going with option four would be the most direct approach to doing that. But if you want the councils to be there to also serve as a liaison or a mediator for community organizations, or to be sort of a group that encourages cultural awareness, maybe your best option would be to put them under the Commissioner of Human Rights.

“It gets down to what the legislature wants and expects of these councils in 2014. What is it that we really want? We think that some sort of clear purpose would help identify which option might be the best.”

Nobles did have kind words for COBM Executive Director Ed McDonald. “We think Edward’s brought a lot of good skills and made some improvements at the council,” said Nobles. Worthy of note, Nobles and Vos said, was that the COBM did draft and introduce 13 bills that were submitted to the legislature this session, two of which — a bill calling for the expansion of human rights duties, and another dealing with African Heritage arts & culture preservation and growth — are still alive.

“I think it was a good thing for them to do that. I think it is good, no criticism of that at all.” To which Vos added, “We say that in the report, that since this year they’ve been taking a more active role in trying to ignite the legislature, in proposing legislation. We do give them credit for that.”

The audit does state, “In the last year, COBM has been active in proposing and drafting legislation.”

Asked if the Clinton-era mantra “mend it, don’t end it” applied in this circumstance, Nobles agreed, saying, “Absolutely. In fact, I would say, not only mend it; make it better. I think the structure to us matters to the degree that we can find an option that really works. Periodically we need to think about how we might do things better.”

The auditors also gave McDonald high marks for being able to provide records for the audit going back 10 years. Vos told us, “One of the things we wanted to do in asking for 10 years was that we really wanted to see that this isn’t just a recent thing, of not being able to get the governor’s office to make these appointments in a timely way — that this has been a chronic, persistent problem across the years and across administrations, that it’s not just the current governor, but the previous governor as well.

“And I think what that speaks to part of the problem here is not just with the councils themselves, but within state government. It’s in the governor’s office. They have contributed to some of the problems.

“The legislature has contributed to some of the problems, sometimes kind of isolating and even sometimes kind of crippling the councils from functioning well. If the councils don’t have members appointed to fill vacancies, and don’t have members attending meetings…if the governor’s office makes appointments and people just don’t show up, or they’re not contributing in a positive way, the governor’s office and the legislature need to do something about that.

“And so again, that’s why we wanted to see these long trends to say, not only to the councils, but the governor’s office and the legislature, you have some things you really need to improve on.”

The fate of the councils, the auditors explained, is in the hands of the legislature and will need to meet with approval from the governor, whose signature on the legislation is necessary. “So it will be both branches of government, I hope working collaboratively.”

“I’d frankly like to see the governor’s office weigh in on which of the four options they would prefer,” said Nobles. “I haven’t heard that yet from them, and I think even legislators are still sort of formulating which one of those options they want to put forth, either this session or maybe the next one. I think they want to do that in collaboration with the communities that are represented.

“That may take some time.”

Despite repeated attempts, we have been unable to obtain comment from either legislator.

This is part two in a three-part series. Next week: COBM director responds

To view the full Legislative Auditor report, go to www.auditor.leg.state.mn.us/ped/pedrep/councils.pdf.