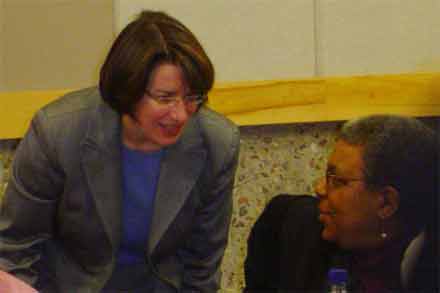 The Minnesota Democratic-Farm-Labor Party’s (DFL) African American Caucus held a meeting on September 28 in a large room at the Martin Luther King Center in Minneapolis.

The expected highlight of the evening, a brief talk with U.S. Senate candidate Amy Klobuchar, attracted almost 40 participants to the meeting, but the real energy focused on issues of supporting black candidates in successfully achieving elected positions. Around those issues, discussion flowed with intensity.

Prior to the meeting’s start-up, Sunday Alabi, chair of the political action committee for the Minnesota chapter of the Association of Community Organizations for Reform Now, reflected on the different common denominators of various caucuses. The African American Caucus distinguishes itself from other precinct caucuses in that it gathers its members based on race rather than location. It also meets regularly throughout the year, rather than convening on even-numbered years as prescribed by the Minnesota DFL headquarters.

Alabi referred to the African American Caucus as being issue-driven and pushing an agenda, which is precisely what happened on Thursday evening when William “Corky” Finney, running for Sheriff of Ramsey County, and Gregory Gray, vying for District 2’s seat as a Hennepin County Commissioner, stood before the crowd to stump for themselves as well as — and perhaps more importantly for — electing blacks overall to political positions.

Gray told the audience, “We need to change the priorities of the county government. Hennepin County has never had a person of color serve on its commission. The board could benefit from a fresh perspective.”

Bill Davis, DFL state party treasurer and African American caucus co-chair (along with Dr. Josie Johnson, who was absent), began the meeting. He solicited a brief summary of the highlights from the African American Leadership Conference recently held in Detroit, Michigan. One participant reported that Minnesota was strongly represented by 15 members. Ken Foxworthy, deputy chair of the African American Caucus, hopes to bring the conference to Minneapolis next year.

At the conference, the need for organizations such as GOTV (Get Out the Vote) and MoveOn.org to work within communities was discussed. “GOTV shouldn’t be entering into a community four days before the vote [so that] they can knock on doors, but rather, they should be getting into a community months before hand and working with the people,” stated Davis.

Mathea Little-Smith, caucus member, expressed concern about the difficulty in translating what was learned and experienced in Detroit back to interested parties in Minnesota. “How do we get the Minnesota DFL to take our caucuses seriously, to be respectful and sensitive to different cultures?” she asked.

Gray offered a rejoinder to Little-Smith’s comments: “Unless we bring something to the table, that is, a proven ability to produce volunteers, votes, or money for a candidate, we’re going to be ignored. If we truly want to have power, then we have to provide these items; otherwise, we’re looking for charity. We need to mobilize Black people to come out to vote. If we can’t do that, we’ll be ignored and rightly so.”

Davis also allowed an unscheduled, though brief, presentation by Jeanne Massey, treasurer of the Better Ballot Campaign, about the issue of instant run-off voting. Massey especially advocated for this idea because she sees it as a method for encouraging minority voices to be better heard.

It was noted that Illinois Senator Barack Obama will be appearing at a luncheon at the Minneapolis Club on October 9 in support of Amy Klobuchar. Much laughter ensued after revealing that a plate alone at the luncheon will cost $250, but the seriousness of the financial requirements of running for office came to the fore.

“If you happen to be an African American running for political office, money is in short supply. The thing that keeps [the candidates] going is their passion and charisma,” said Little-Smith.

Bill Davis reinforced Little-Smith’s point about finances. He described the assets of a successful candidate, saying that a contender for office needs votes, volunteers and money in order to win a campaign.

“Now, she didn’t get there because of Corky Finney. When I met her, she was a police commander in Miami… When she leaves the state of Minnesota next Tuesday, she’ll be the only woman of color that was there, and on Wednesday there’ll be no women of color in the state law enforcement. Her retiring is a monumental event in Minnesota; her selection was [as well]. She got a little press in the paper only after some people breathed some fire on the press, because they weren’t going to cover her retiring because of her connection to me and politics. Her retiring is not a political event. She got her years in and she wanted to go.

“Now, I don’t say that to disappoint you or to stress you. I say that because there’s a lot of work to be done. It takes a lot of effort, a lot of energy, and you have to understand that if you’re a person of color, especially African American, you’re not going to get the resources, which means you have to make better relationships, work harder with people, attract people of caliber and understand it’s going to be a tough row, but when you get to where you’re going to go, make a difference. Make a difference.”