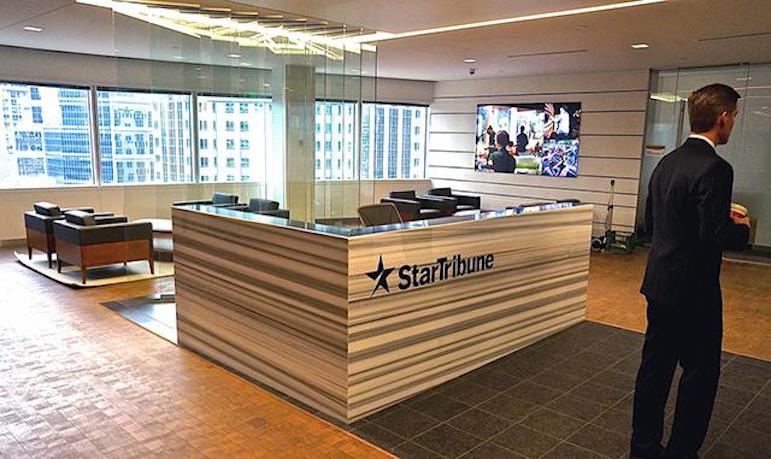 Last October, at the height of Minneapolis’ citywide debate about fair scheduling and paid sick time, Star Tribune publisher and CEO Michael Klingensmith wrote a letter to Mayor Betsy Hodges and three City Council members about the perceived adverse impact these ordinances would have on the Star Tribune.

“We view these proposals as an existential threat to our business,” he wrote. “It would be a tragedy for a city ordinance to end the existence of the free press as we know it in the state of Minnesota.” 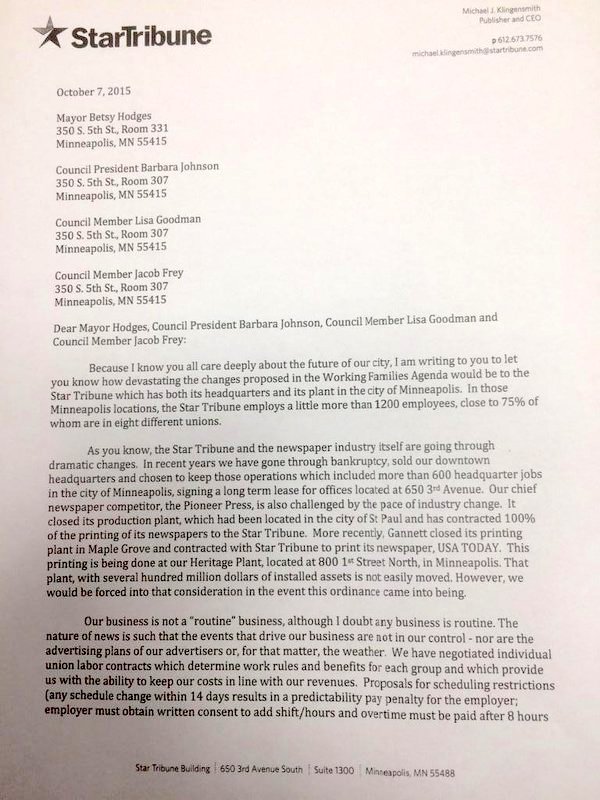 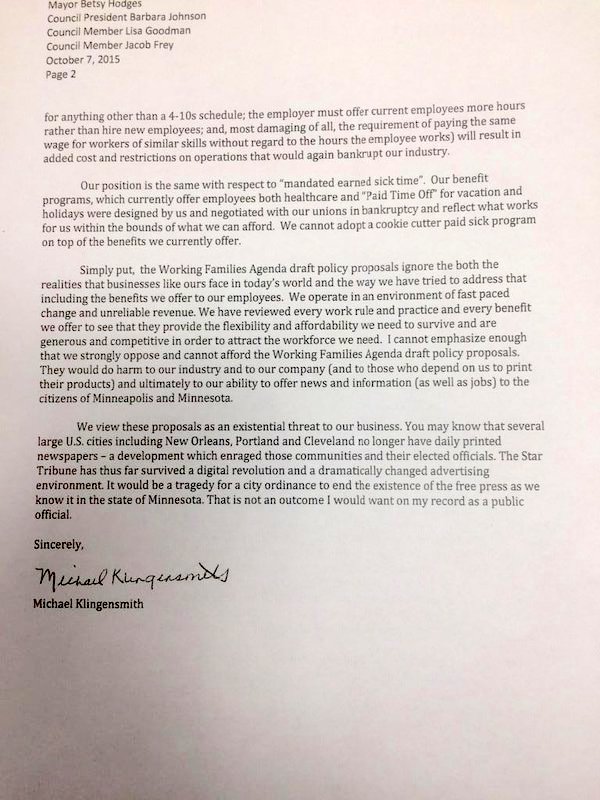 But what happens when the freedom of the press is compromised by a newspaper’s own business interests?

Since the Star Tribune began lobbying the city to halt these ordinances, the Star Tribune editorial board, of which Klingensmith is a member, has blisteringly argued against Minneapolis’ proposed paid sick time policy three times – an extraordinary effort for a single policy.

In one recent editorial, the Star Tribune editorial board begins their attack by insinuating that the sick leave ordinance before the City Council is some kind of rush-job legislation.

They write, “Mayor Betsy Hodges and the City Council appear to be in quite a hurry, with barely a month between introduction of the draft ordinance and a final vote on May 27.” These sentences would lead readers to believe that this proposal was hastily thrown together with little opportunity for public input—beliefs that are factually incorrect and misleading. The editorial board goes on to argue for a voluntary and unenforceable paid sick time policy, mirroring a “solution” proposed by the Downtown Council, a lobby group for downtown business interests.

Paid sick time was first introduced as part of the Working Families Agenda more than a year ago, after months of organizing by a large coalition of worker and workers’ rights groups. In the fall of 2015, the Workplace Partnership Group was established to look into the sick leave issue and develop a policy proposal. The group was made up of workers, small business owners and at least one representative of big business interests: Minneapolis Downtown Council CEO Steve Cramer. The work group held regular meetings over the last six months to consider the issue and “created its proposal after holding 14 listening sessions around the city.”

The Strib’s recent editorial was intended to give readers the impression of an ill-considered and hastily thrown together policy proposal, which is entirely misleading. And one would think that the Star Tribune would know better, given that they have been paying staff writer Erin Golden to cover the issue and she’s written at least 10 articles covering the development of the sick leave ordinance since October 2015. In fact, the quote above about 14 listening sessions comes from her coverage, published in the Star Tribune.

The editorial not only misrepresents how the proposed ordinance was developed, it neglects to point out that the viewpoint they are parroting–namely, Steve Cramer’s–was completely atypical of the group charged with considering the issue and drafting the policy. Of the 15 representatives on the work group, 13 voted in favor of the proposal and one abstained. The only person to object was Steve Cramer from the Downtown Council. No other person close to the project and fully informed on the issue stood in opposition to the proposed policy.

That the billionaire-owned Star Tribune’s editorial board is serving as the mouthpiece for big business interests in Minneapolis should come as no surprise. The Star Tribune Media Company has a representative on the Board of the Minneapolis Downtown Council. And increasingly consistently, the Star Tribune editorial board echoes the Downtown Council’s policy position on issues impacting downtown Minneapolis nearly verbatim: they argued against the repeal of outdated spitting and lurking laws disproportionately used against people of color, saying these laws were necessary to “keep downtown livable” and argued that “Pro soccer stadium deal is a gift for Minneapolis.” More recently, they have taken a hard line against any improvement to workers’ rights in Minneapolis, where the Star Tribune employs hundreds of workers.

All of these positions are in lockstep with the Minneapolis Downtown Council. I was unable to find a single recent example of the editorial board disagreeing with a Downtown Council policy position.

The Star Tribune editorial board is using its power of the press to promote its own business interests and a very lopsidedly pro-business agenda for Minneapolis. And doing so brings real consequences for working families in our city. The burden of these pro-business policies advocated for by the editorial board falls disproportionately on low-income workers and communities of color in Minneapolis. This kind of one-sided, anti-worker position only serves to maintain the economic and racial disparities that plague our city.

For democracy to work, citizens need the media. They serve as our watchdog, alerting us to the actions, motives and decisions of public elected officials.

The media is so important for a functioning democracy, that they are often referred to as the “Fourth Estate” of government—though, obviously technically outside of government. This close association and figurative inclusion in government has to do with their significant role in influencing policies through their coverage of issues. In both their reporting and editorials, the media shapes public opinion on the important issues of our day.

When it comes to reporting, citizens expect factual and balanced coverage. In editorials, citizens hope for even-handed consideration of issues. At the same time, people have to consider the source. They must ask themselves, “can this outlet be trusted to cover an issue in an impartial way?”

When it comes to any coverage of downtown Minneapolis and the editorial board of the Star Tribune, it seems that the answer is no.

Kathleen Cole, Ph.D., lives in Minneapolis and is a political science professor in the social science department at Metropolitan State University. Her views do not necessarily represent the views of her employer.