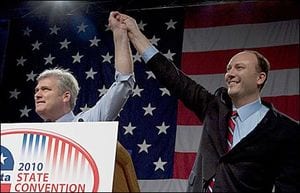 Target Corporation has been battered by a national storm of criticism for sending company money to an independent committee pimping Emmer’s campaign on the airwaves.

The tsunami of scorn for the corporate political contributions has swept away the hope of Emmer’s handlers to define him as a visionary and statesman, his ethos eroded by growing public awareness of his real positions on the minimum wage, human rights, the environment and immigration policy. Emmer was an obscure and angry three-term exurban legislator before seeking the Republican endorsement, but in the run-up to the Republican convention at the end of April,  traditional mainstream media venues went along with the campaign’s spin.

Typical of April’s headlines? The item from the Star Tribune: Framing himself as a statesman, Emmer lays out his vision. For a while it worked. The Minnesota Independent noted Emmer leads in KSTP poll in late May. Today? The Strib’s Minnesota Poll shows all three major Democrats hold lead over Emmer.

And now Emmer can’t gain the Strib’s endorsement for the Republican primary in what is essentially non-contest:

One reason Republicans might be inclined to stray into the IP primary is that the contest on their own primary ballot is not competitive. GOP endorsee Tom Emmer faces only token opposition from perennials Ole Savior and Leslie Davis, and a principled but politically ineffectual challenge from Bob Carney Jr. The GOP primary warrants no recommendation from this newspaper.

Carney, a Minneapolis journalist, offers moderate Republicans who have not followed Horner out of the party an option on the primary ballot. He’s a critic of Gov. Tim Pawlenty’s 2009 unallotment, which he considers an unconstitutional executive-branch power grab. His realistic budget plan — more detailed than any yet seen from Emmer — includes a $3 billion tax increase. The fact that Carney has been unable to mount even the semblance of a campaign reveals how near to extinction the once-dominant moderate faction of Minnesota’s Republican Party has become.

Such are the days in the life on a campaign. The spin ends in but labor and sorrow–soon gone, as public opinion flies away like sand from a hurricane-tossed beach or pennies scattered in a bar.

Photo: Now we all know why Marty Seifert (right) smiled in the face of his loss of the endorsement to Emmer (left).