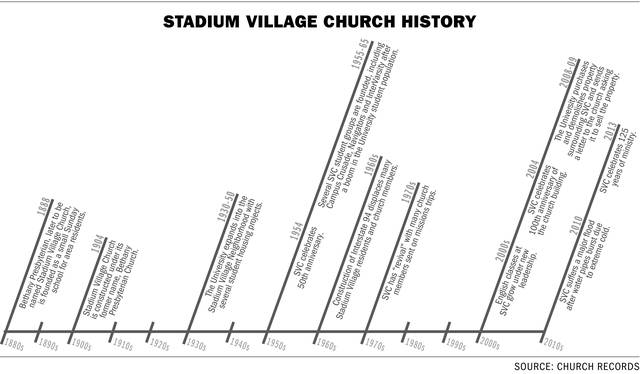 Larry Ballard was a University of Minnesota student in 1964 when he saw an ad for Stadium Village Church in the Minnesota Daily and started attending.

That same year, he met and married his wife at the church.

On Sunday, the couple attended the church’s 125-year anniversary celebration with other former and current members and church leaders.

Pastors Kathleen Macosko and Lowell Busman organized the two-day event, which included a cruise on the Mississippi River, a historic walking tour and a performance by the church’s alumni choir.

The weekend’s festivities also featured a presentation on the church’s history and a visiting hour for former members.

“We heard stories from the past and celebrated who we’ve become, which is a little different than what it was before,” Macosko said.

Over time, the church’s congregation has become increasingly diverse.

The church, formerly known as Bethany Presbyterian, was founded in 1888 as a small Sunday school for the working-class families who called the neighborhood home.

Since an influx of Korean students became church members in the 1950s, Macosko said a number of cultural groups and international students have left their mark on the church.

Of the 120 regular parishioners, she said, many are University students from China, Japan and South Korea.

“It’s a great place for people who want to interact with the rest of the world,”
Macosko said.

Ballard said the church now “has a much stronger international student presence” than when he first started attending.

The church also has a strong history of sending members abroad for missionary work.

Macosko, who became one of the church’s pastors in 2002, said its message has always been the same.

“We don’t care so much about labels,” she said, “just about where [members] want to go with Jesus.”

As the surrounding neighborhood has changed, the church’s existence has sometimes been threatened.

In the early 20th century, the church was made up mostly of Stadium Village residents, Busman said. After World War II, the University experienced a construction boom and many families moved out of the area.

In the 1960s, construction of Interstate 94 wiped out whole blocks of residential housing, depleting the numbers of the already stressed community.

During that time, the University approached the church several times about selling the property — something Macosko said it continues to do.

During that time, the congregation became younger as more University students started attending.

Many of those students ended up changing their career paths and dedicating their lives to missionary work.

Ballard, who has done just that, said he’s amazed the church’s mission has stayed the same, even alongside the evolution of the church community and Stadium Village.

“It’s always had a similar heart,” he said. “The message and vision of the church is concrete.”