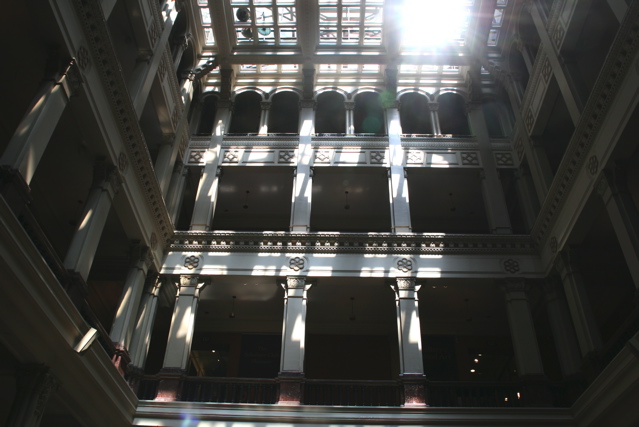 If any building reflects twentieth century Minnesota history, it would be the Landmark Center on Rice Park in St. Paul. Completed in 1902 after seven years under construction, the building is an architectural marvel. The style, Richardson Romanesque Revival, has turrets, gables, dormers, and peaked roofs. The facing is pink granite and the steep roof is red tile. The building was praised across the country for its design.

By 1970, the building was in disrepair, and officials, enamored with the sleek glass and steel towers rising up in other cities, felt that the time for buildings like the Landmark Center had passed. Plans were underway to tear down the building and put up a parking lot.

But a few extraordinary people believed that beautiful architecture enhances a community and they set out to save the Landmark Center from the wrecking ball. They came together 40 years ago to raise money and organize to turn it into one of Ramsey County’s foremost homes for arts and history. Facing a deadline, the group raised enough money for the first phase of repairs, and just a week before the building was to be destroyed, it was rescued.

Many of those volunteers gathered on April 28th at the 2nd Annual Legacy Luncheon, an event to exchange stories about their years of organizing and fundraising.

The event focused civic engagement and the impact individual citizens can have on their communities, and featured speaker Vice President Walter Mondale, who was there at the restoration’s first ribbon cutting.

From 1902 until 1967 when federal offices moved to new headquarters, the Landmark Center served as St. Paul’s federal building, housing the main post office and the United States Courthouse where John Dillinger, Machine Gun Kelly and Baby Face Nelson were tried. Harry Blackmun, later to become a Supreme Court Justice, served there as a law clerk.

Nearly abandoned, the building fell into disrepair and the wonder was forgotten. The post office had put in a false ceiling so that visitors didn’t know that above them was a five-story indoor courtyard and rooms with 20-foot ceilings.  It became ugly and neglected. Neglect created damage. The roof leaked and the upper floors became homes for pigeons.

“We’d raise some money, then do some constructions and we’d open the building for tours,” said Gail LaFave, who led some of the tours during the 1980s.  “It was mostly the women doing the fund raising. We’d get money, then they’d close it up and they’d do work on it.” There was a lot of work to do. “The marble, the skylights – everything was painted over government green,” said LaFave. “They had to find the factory that made the original roof tiles so they’d match exactly.”

Currently owned by Ramsey County, the Center began to accept tenants in the late 1970s, focusing not on government offices but arts organizations, including the American Association of Woodturners Gallery of Wood Art. Ramsey County Historical Gallery has an exhibit and another, Uncle Sam Worked Here, shows a history of the center through the people who worked there.

The Schubert Club, which promotes classical music and education, has an interactive museum on the second floor. There are gallery spaces, a cafeteria and gift shop.

The St. Paul Conservatory for Performing Artists holds classes for more than 400 high school students there as well. “We opened the school in 2000. The kids add a vitality to the whole downtown area,” said LaFave. “There are so many wonderful people who worked very hard to make this place a center for law and the arts. It’s good to see young people carry on.”