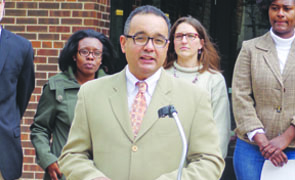 “Then you got this group of people that are trying to figure it out, trying to do the right thing, and trying to leave the world a little better place than what they found it, and I try to put myself in that group.”

Martin’s belief assists him as president of St. Paul’s NAACP, as well as first vice president of the state’s NAACP. With less than half a year left of his second two-year term, just how does the president intend to make the world a little bit better than he found it?

With a list of issues to tackle from police brutality and law enforcement to the public education system, where does he find the time to make use of his voluntary position? “Sacrifice” is the key according to President Martin.

A recent focus of Martin’s has been what he calls the “opportunity and resource gap,” also known as the achievement gap. He has no problem calling out the school system or its teachers when it comes to the lack of training and innovation most of them show when teaching our children.

“It’s the same game,” he says. “Kids haven’t changed.” According to Martin, teachers need to work on building relationships with their students and get to know them. He also says, “We can’t just say it’s the schools’ fault because we were raised better than that.”

Working on the education system helps the future leaders of our communities, but Martin is also looking to help the current leaders and entrepreneurs. According to Martin, St. Paul has one of the worst economic disparities in the country between African Americans and Whites, and African American startup businesses are missing out on opportunities.

To assist in fixing these issues, Martin is trying to work with banks and other community organizations to teach the community. He is looking to form a stronger relationship with the churches. He and his NAACP have put together pending litigation. “Just because you don’t read about us in the paper don’t mean that we ain’t doing nothing,” he says.

“I need your numbers” the president says. No matter how much they do behind the scenes, Martin says that numbers are everything. With increased membership and people showing up to meetings, more responsibilities can be distributed and more things can be accomplished. Also outside of the NAACP, Martin says that Black people miss out on opportunities because “we don’t show up.”

According to Martin, he does not need to hold a title to contribute to what he calls “the movement,” and whether or not he holds a title, he’ll be a part of the NAACP. If there is young talent that is ready to assume the position, and is serious about it, then the current president has no problem stepping down.

“I’m not going to leave the store unattended, I’ll tell you that,” says Martin. “If there’s nobody there that’s really serious about running, then I’ll just assume the presidency again.

Khymyle Mims recently graduated from Normandale Community College and is a summer journalism intern at the MSR. He welcomes reader comments to mimsk@my.normandale.edu.