Students at St. Paul’s High School for the Recording Arts wanted to help Haitians suffering from the earthquake. Taking their talent in hand, they made a music video, “Together (A Song for Haiti),” asking for donations to Yéle Haiti, a charity founded by Grammy-Award winning Haitian musician, producer and social entrepreneur Wyclef Jean.

“The students are very motivated to raise awareness and to show support for the people of Haiti. They want to reach people globally, so that all can send the message to the people of Haiti that we stand “Together” with them,” according to Susan Campion, a volunteer at HSRA.

Campion explained that students worked from 6 p.m. Thursday straight through to 6 p.m. Friday to produce the video, writing all of the lyrics and music themselves, as well as finding the images and producing the music video. They included a very short clip of Saintanne Agbangba, HSRA’s administrative assistant, who is from Haiti, speaking to a school assembly.

Choosing to recommend that donations go to Wyclef’s foundation was easy. Not only had Yéle Haiti been featured on CNN reports about the earthquake, but he was an appealing figure, as a hip hop musician already known to the students.

According to the school’s website, the High School for the Recording Arts, also affectionately known as “Hip-Hop High,” began as a pilot program developed by Studio 4 Enterprises and was approved by the state as a charter school in 1998. With two recording studios, the students produce their work on Another Level Records, a student-operated record label, and on a weekly radio show. 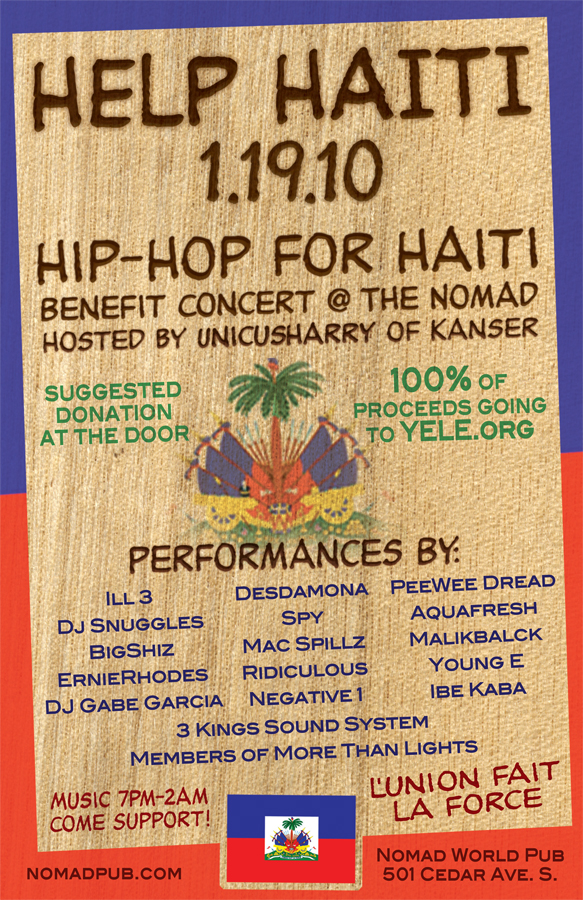 Campion noted that artists on the local hip hop scene stepped up immediately to support and promote the students’ appeal, with Brother Ali hosting the video on his website and tweeting it widely, and other musicians also supporting it.