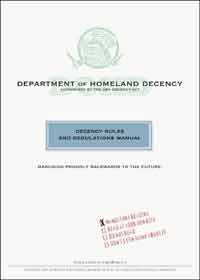 Think protest has to be grim? Humor is a mighty weapon for making political observations and deflating the powerful. Frank and Susan Fuller take aim at the growing political power of the Religious Right with the Department of Homeland Decency: Manual of Rules and Regulations.

“Women’s reproductive rights. Abstinence-only sex-ed and prayer in the public schools. The Ten Commandments in courthouses. The fake fight about Christmas. Domestic spying. There was lots of fodder for us!” laughs Susan, longtime local actor who’s also made her living doing ad voice-overs. “Frank and I were tired of being depressed. It was either drink or write!”

The Fullers are self-confessed “news junkies” who started watching the
conservative televangelists 20 years ago.

“Our friends asked us why we would do that and we said, ‘We need to keep
an eye on these people. They’re planning something.’ And they were!”

“Bush has appointed ideologues to science panels—people who ignore science! Take Dr. David Hager, head of the Female Health Advisory Counsel. This is a guy who “prescribed” reading scripture to women having menstrual problems!” Susan says.

Chapters with bold-faced headlines scream warnings and relentless rules,
the manual addresses all the “hot-button” and “social wedge” issues of
our day, from uterus to grave, and more. Can you help a co-worker from
another country assimulate by sharing your Big Mac? What’s a “floating
prayer zone”? How do TV reality shows prepare the population for
fighting terrorists? What’s a faith-based toaster and why do you need one?

“The books details what you need to do to be decent. There are rules
from the DOHD for mowing your lawn to how to spy on your
neighbors,” Susan slips into the voice of Mrs. Sharon Flue, an official
of the DOHD. “How to deal with what we call OHF—Our Homosexual
Friends—to rules about doing ‘it’. Though, we only refer to doing ‘it’.
The word sex is a little too indecent to actually say.”

The Department of Homeland Decency recreates a kind of white-bread,
militaristic “Father Knows Best” culture, reflected on TV with showing a
wife only works outside the home if Daddy (quote)”…is very ill or
recovering from injuries caused by fighting terrorists overseas.” Fun
facts to teach your kids include “Condoms can explode.” NASCAR becomes the national sport and “News shows are required to have a respect and awe for the President.” The USA Decency Act includes the GAG clause (God’s Always Guranteed to be there) promoting religion in all areas of public and private life, with regulations on required Christmas
decorations and how bosses should “base merit increases and raises on
the fervency of each employee’s praying style.”

“You can’t believe how many people we’ve met who’ve found required prayer coming into their workplace! Prayer is part of business. You pray before a staff meeting. There’s pep rally prayers!” Susan says.”It’s
becoming pervasive. They can say it’s optional,but, when you’re the only person in the room that’s not praying…”

“It’s just like prayer in school,”Frank jumps in.”It’s pressured. They
want you to pray when they say and to pray in a certain way—their way.”

But, wait there’s more! Threats are everywhere and anything can ‘weaken
our resolve”: from casual Fridays at work to vegetarians, childless-by-choice couples and those who drive fuel-efficient cars. There’s a very thin line between conservatives like Pat Robertson and this perfect parody.

Start your own “Neighborhood Decency Posse”, (with the “Indency Report
Form” helpfully included), but, all members must take the “Individual
Decency Determiner” quiz, answering questions like: Who would you most
like to go to Hell? What new commandment would you add to the Ten
Commandments? What country should be added to the Axis of Evil?(Choices: France, Canada, Vermont). As the Bush Administration revives 1960s COINTELPRO-style domestic spying on nonviolent dissidents and too many Americans claim to be “willing to give up some freedom for safety from terrorism,” the Fullers’ absurdities have a chilling undercurrent.

“We hope people will have a good laugh but, also think about what the
government is doing, from faith-based organizations getting hundreds of
millions of dollars to domestic spying and torture,” Susan Fuller says.
The Fullers’ Web site is www.homelanddecency.com

Susan and Frank Fuller, talk and read from The Department of Homeland Decency:Manual of Rules and Regulations, with DOHD official “Mrs. Sharon Flue”, free and part of the Daily Planet’s Local Writers’ series Sat., April 22, 3 p.m., May Day Books, 301 Cedar Ave.S. (basement Hub Bicycle, enter freeway side of building), West Bank, Minneapolis (612) 333-4719 An interview and their “Dececency PSAs” are on Catalyst archived at www.kfai.org